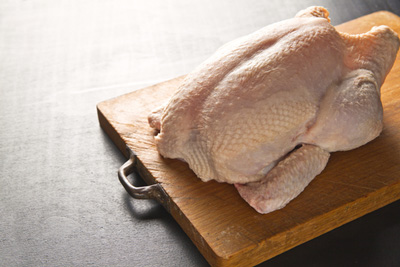 The UK Food Standards Agency (FSA) has published the latest results from its survey of campylobacter on fresh shop-bought chickens. The FSA has reported that results for the second quarter of testing, from October to December 2015, continue to show a decrease in the number of birds with the highest level of contamination from the same months in the previous year. These most heavily contaminated birds are the focus of the current target agreed by industry, which is equivalent to no more than 7% of chickens at retail having the highest levels of contamination.

The latest data show 11% of chickens tested positive for the highest level of contamination (carrying more than 1,000 colony forming units per gram (cfu/g)), down from 19% in October to December 2014. Campylobacter was present on 59% of chicken samples, down from 74% in the same months of the previous year.

In this second quarter of the FSA’s second survey, 966 samples of fresh whole chilled UK-produced chickens and packaging have been tested.

Trimming of neck skin may be helping to deliver improved results

The data continue to show an improvement from the previous year. Interventions, including improved biosecurity, SonoSteam, and the trimming of neck skins, introduced by some retailers to reduce levels of campylobacter, may be helping to deliver the improved results. The trimming of the neck skin, the most highly contaminated skin area, means chickens are carrying less campylobacter. The results of this intervention, while making chickens safer, mean comparisons to the first year’s survey may potentially be more difficult in future quarters as most samples from the previous year will have analysed more neck skin. The FSA will review the impact of this successful intervention to ensure the survey results remain robust.

The FSA has been testing chickens for campylobacter since February 2014 and publishing the results as part of its campaign to bring together the whole chicken supply chain to tackle the problem. Campylobacter is the most common cause of food poisoning in the UK, making an estimated 280,000 people ill every year.

Commenting on the latest results, Steve Wearne, Director of Policy at the FSA, said: “These results are heading in the right direction and we must continue to build on this progress. Retailers and processors must ensure the interventions that are working are embedded in industry practice. We have also arrived at a point where consumers expect access to data about campylobacter, so the FSA must ensure its survey remains robust and work with industry to ensure as much sampling data as possible are available to the public.”