The scientists found that reduced salt created a stickier dough, which has implications in large-scale processing when dough sticks to machinery, but this could be mitigated with stronger wheat cultivars, higher water contents and shorter mixing times. 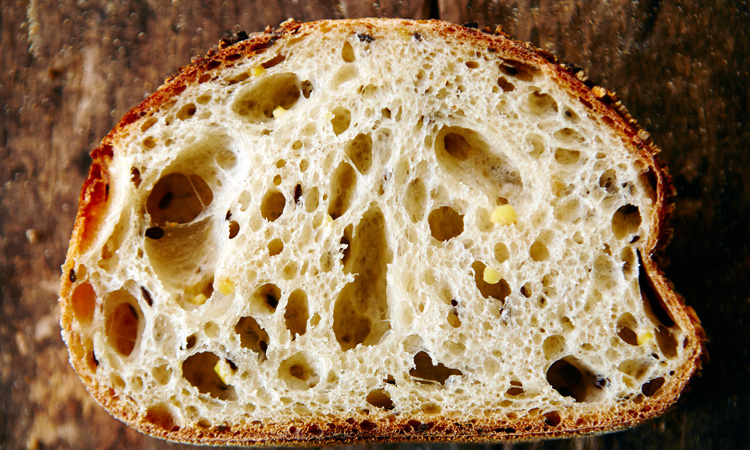 Along with a team of colleagues, Dr. Filiz Koksel, an Assistant Professor of food and nutritional sciences at the University of Manitoba (UM), has used the CLS synchrotron (The Canadian Light Source) at the University of Saskatchewan to explore how a call for reduced sodium in bakery products affects the billions of tiny bubbles that help make bread such an appealing food.

The research stems from Health Canada recommendations that Canadians reduce the amount of sodium in their diets. “Among all foods, bread and bread products contribute about 30 percent of this excess consumption,” Koksel said. The researched aim “to see if it is easy to reduce sodium and to identify processing challenges related to using less salt.”

The key to commercially produced bread is the crumb or texture that is created by an even distribution of uniform-sized bubbles throughout the dough, Koksel explained. Consumers of commercial breads are said to like consistency, meaning no big holes. In contrast, bakers of artisan breads like French baguettes strive for bubbles of varying size. “Bread can be up to 80 percent air by volume,” Koskel said.

At the CLS, the researchers prepared simple non-yeast doughs to assess how varying the salt content affects bubble formation and dough-handling properties. They created a range of samples using two different wheat cultivars popular in bread making, various water and salt contents, and a number of dough-mixing times. Then, X-ray microtomography recorded real-time changes in the bubble size and distribution in the samples. Using the non-destructive X-ray technique was critical to the study, said Koksel, because the delicate bubble structures would be destroyed if the samples were cut open for observation.

“During mixing, three critically important tasks are taking place,” said Koksel. “First, mixing blends and hydrates the ingredients. It is also critical to developing gluten proteins in the wheat, and to incorporating air bubbles into the dough. Mixing also affects the dough handling properties. Reducing sodium can end with a good result if water, the wheat cultivar and mixing are all optimised.”

Additional changes to bread formulations such as increasing fibre or reducing other additives will require similar evaluations, Koskel said, “because with each change we are facing new processing and product quality challenges.”