Employees of one of the largest farms in the Moscow Region, together with IT experts, have reportedly conducted an experiment, having studied the effect of VR, and developed a prototype VR headset for cows with the aim to improve emotional state and increase milk production as a result. 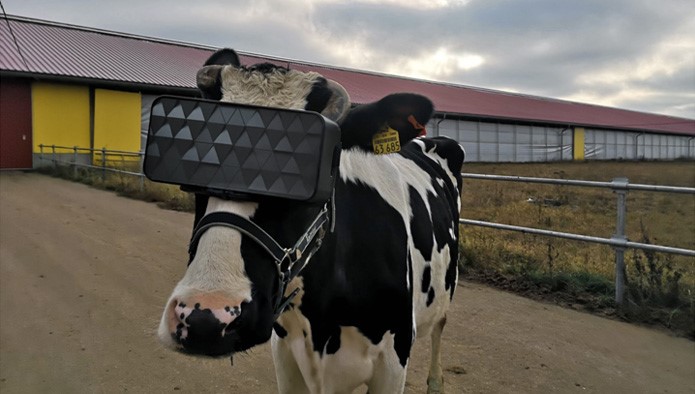 Credit: Ministry of Agriculture and Food of the Moscow Region

A prototype of virtual reality (VR) glasses has been tested on a farm in the Moscow Region with the aim to improve cow conditions.

To solve pressing problems in milk production, experts are said to be increasingly involved not only in specialised fields, but also in the field of IT technologies. In addition to the physical needs of animals, researchers are said to be paying more attention to the emotional state of animals as a method of increasing output. Examples of dairy farms from different countries have allegedly shown that in a calm atmosphere, the quantity, and sometimes the quality, of milk increases.

According to the Ministry of Agriculture and Food of the Moscow Region, manufacturers in Moscow suburbs have installed sound equipment for broadcasting classical music in an attempt to create a relaxing effect for cows, which allegedly positively affects milk output.

According to an analysis of the welfare of dairy cattle by Wageningen University, the Netherlands, environmental conditions have a significant impact on cow health and, as a consequence, the quality and quantity of milk produced. These findings are also allegedly confirmed by researchers from Scotland’s Rural College. Based on interviews with farmers using various systems to improve livestock welfare, a relationship was formulated between the positive, including emotional, experience of cows and the positive effect on milk production.

The developers of the VR studio, in collaboration with veterinarians and consultants from the production, adapted human VR-glasses considering the structural features of the head of cows. Based on numerous studies of cattle vision, cows allegedly better perceive the red part of the spectrum, as well as weaker green and blue tones, and so the VR architects created a unique programme for simulating a summer field. The summer field illusion has been designed to encourage the cows to eat more grass during the colder, winter months in which cows are said to generally consume less.

During the first test, experts reportedly recorded a decrease in anxiety and an increase in the overall emotional mood of the herd. The impact of VR glasses on the milk production of cows is planned to be shown by a further comprehensive study. While maintaining positive dynamics of observations, the developers intend to scale the project and modernise the domestic sphere of dairy production.