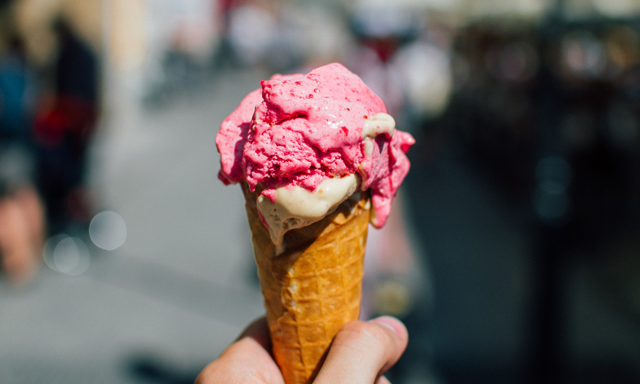 Ice cream mix is traditionally frozen within a continuous freezer process, utilising a ‘scrape-and-churn’ method. Both liquid mix and air are pumped into one end of the continuous freezer and subsequently agitated. Agitation occurs through motor-driven rotating blades and dashers that extend close to the interior wall of the barrel. Upon completion of agitation, the partially frozen mix is then drawn out, dispensed into packages and promptly placed into a blast freezer to undergo a time- and energy-consuming hardening process. Being one of the most popular desserts around the world, the production of ice cream is an energy-intensive process, inviting significant energy-saving opportunities. Furthermore, this process relies on economy of scale to be profitable and therefore large, single product batches are common while customised products can be difficult or even impossible to produce economically.

Traditional methods of ice cream production necessitate the product be able to withstand temperature fluctuations in order to be of high quality once received by the consumer. The ice crystals and air bubbles in the emulsion matrix of ice cream are very sensitive to these temperature fluctuations so they must be stabilised by the addition of emulsifiers and thickeners. By developing an on-demand system, these undesirable additives are no longer needed.

The novel flash-freezing machine freezes ice cream mix with instantaneous, direct carbon dioxide contact. The on-demand freezing/cooling system (patent pending) designed by the Rizvi Lab has been developed to rapidly produce ice cream (and other frozen and partly-frozen products) at the point of consumption with a unique taste profile that results from the incorporation of carbon dioxide. Not only does this novel technology streamline various stages of the aforementioned freezing process, it also provides the following numerous advantages:

Our flash-freezing machine intelligently combines favourable characteristics of both mechanical and cryogenic freezing systems by integrating Joule-Thomson cooling with the Bernoulli Effect. We utilise the distinct advantage of cryogenic cooling through the mechanisms of the Joule-Thomson cooling effect. The collaboration of these systems paves the way for an efficient, on-demand freezing system without the limitations of hazardous refrigerants, excessive moving parts, and high energy consumption.

The Joule-Thomson effect is a thermodynamic process that occurs when a fluid expands from a high pressure to a low pressure at constant enthalpy. This process can occur across a small orifice, where the pressure of the fluid is significantly lower at the outlet of the orifice than at the inlet. If the pressure and temperature of the media is calculated correctly, a gas can cool considerably in a very efficient manner. 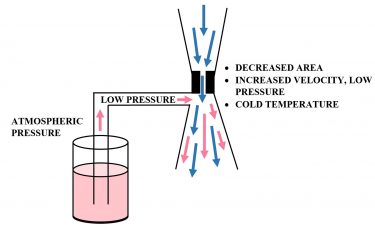 low pressure (vacuum) in this section of the system. This vacuum is needed to draw up liquid into the cooling stream created by the Joule-Thomson effect. This is achieved by directing high-pressure carbon dioxide through the small orifice, creating a high velocity jet of carbon dioxide. This phenomenon, known as the Venturi Effect, is a specific application of Bernoulli’s Principle. Bernoulli’s Principle implies that the volume immediately following the small orifice will have a lower pressure than the pressure before the orifice. If an inlet source is introduced directly after the orifice outlet, any fluid at a pressure higher than that after the orifice will be suctioned into the flow path. This setup (shown in Figure 1) is considered a Venturi tube, a basic mechanism commonly used in industry to mix multiple fluids.

A single-serve unit (shown in Figure 3) has been designed and built to prove the described principles. As illustrated in the process diagram in Figure 2, the system begins with carbon dioxide at roughly 830 psi (57.2 bar) and room temperature conditions. The carbon dioxide is compressed in a gas booster and subsequently heated to the desired temperature before being further controlled by a pressure regulator. The pressure and temperature are set so that when the gas exits the carefully designed Joule-Thomson nozzle, the expanding gas will cool to -78°C, performing a cryogenic process. This is an ideal temperature to efficiently and directly flash-freeze food products.

The exit nozzle serves a dual purpose as a component of the Venturi eductor assembly. Two inlets are 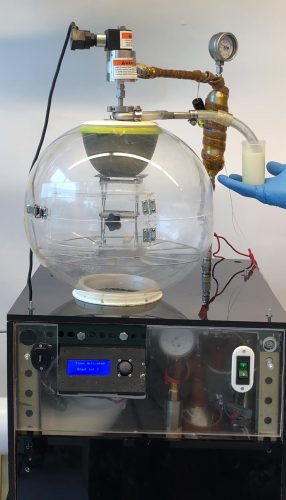 placed perpendicular to the gas flowing through the outlet orifice. These two inlets are introduced tangentially to one another so that when the fl uid is suctioned, they will mix effectively. A fluid supply container is placed at the inlet of the fluid suction tube before the user activates a high-pressure solenoid valve. Once actuation is detected, the room temperature fluid is suctioned by the jet of carbon dioxide and simultaneously frozen due to the low temperatures of the carbon dioxide created by the Joule-Thomson effect. The resulting product is deposited into an enclosed collection bowl (shown in Figure 4) while excess carbon dioxide is exhausted from the collection area. The key benefit of this portion of the unit is that the liquid feed input requires no moving parts.

This novel system provides the opportunity to cool any liquid or food in liquid form to a frozen or partially frozen state on-demand. The current model of the machine produces a mass of frozen ice cream product around 100 grams (one scoop) within a three-second timeframe, returning an efficiency of around 67 percent. The resulting products are very smooth due to the smaller ice crystals that are formed from the almost instantaneous freezing compared to traditional freezing methods. The unique configuration of the system allows the user to manipulate parameters such as pressures, temperatures, and inlet geometries to achieve desired product qualities. It is possible to introduce various gases or air into the suctioning portion of the system by altering geometry in this section.

While the frozen products from this machine contain small amounts of carbonation, they compare well with commercial ice cream products when tested quantitatively. Four ice cream products listed in Table 1 underwent testing consisting of mix viscosity measurements at 20°C, overrun, and meltdown testing. Testing results can be found in Table 2.

There appears to be a tendency for ice cream made with lower viscosity mix to experience higher overrun values when produced in the flash freezing machine. This phenomenon is especially prominent in the Lab Made Formulation 1 mix, which is 2.6-5.9 times more viscous than other mixes. This apparent correlation indicates that the flash-freezing machine may be viscosity dependent, lending itself to lower viscosity mixes, which are often synonymous with clean label mixes that lack viscosity-inducing gums.

The overrun values for flash-frozen ice cream products are similar to the commercial Ice Cream 1 overrun. Overrun in this range would categorise as super premium ice creams, which is highly appealing to consumers. Results demonstrate that first dripping time is proportional to ice cream overrun, while the maximum melting rate is inversely proportional to overrun. This aligns with previous research that finds there is a decrease in drip-through rate as overrun increases.3 The inverse relationship between overrun and maximum melting rate can be explained by higher overrun values having lower diffusivity and air having an insulating effect, causing a lower meltdown rate.3 Deviations from these correlations may be attributed to the extent of fat destabilisation, especially in flash-frozen samples. 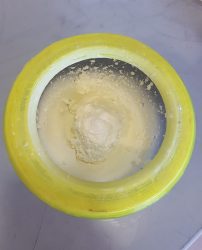 Figure 4a: ice cream in bowl 1 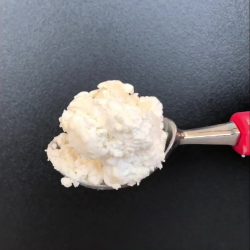 Although percentage of fat destabilisation was not measured in this study, it is possible that higher shear stress occurred when flash freezing the ice cream starter mix, which could lead to a higher percentage fat destabilisation and therefore a slower melting rate when the overrun was not particularly high.4,2 In addition, numerous factors including varying formulations, processing conditions, and unknown storage conditions may contribute to deviations from expected correlations.1

It is theorised that flash-frozen ice cream has smaller ice crystal sizes compared to commercial ice cream. Many small ice crystal sizes may create a more tortuous path for serum to melt through, decreasing the melt-down rate.2 Additional research, including detailed Cryo-SEM imaging, must be conducted to determine if there is a correlation between melting rate and ice crystal size.

Further research needs to be conducted to better support these claims. Forthcoming improvements will help to optimise this technology to provide a novel and effective method of flash-freezing other liquid foods.

SARAH JOHNSON is a student at Cornell University pursuing a Master of Science degree in Food Science with a concentration in Food Engineering. Her research is focused on novel cryogenic freezing of food. She holds a B.S. in Mechanical Engineering from Carnegie Mellon University.

SYED SH RIZVI is international professor of Food Process Engineering in the Department of Food Science at Cornell University in Ithaca, NY. His laboratory is engaged in research on experimental and theoretical aspects of supercritical fluids, cryogenic freezing, high-pressure extrusion, physical and engineering properties of biomaterials and novel food processing technologies for value addition.