Supercritical fluid extraction (SFE) technology is a green technology that offers an alternative to conventional solvent extraction technology.1 Having less impact on the environment it also meets consumer demand for safe, natural and high quality ingredients. More and more industries are using SFE technology and are reported to have market advantage. 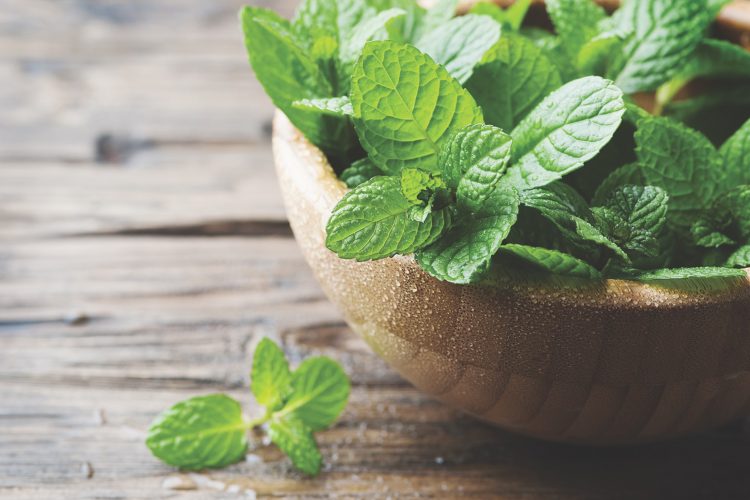 SFE is a process in which the gas beyond its critical temperature and pressure is fed to the extraction vessel in order to extract the desired compound/mixture of compounds from the product matrix (Figure 1). Under supercritical state the fluid has both the properties of gas and liquid, as it has density like liquid and viscosity like gas. This property enhances the diffusivity of the fluid in the product-containing matrix and increases the rate of extraction of the targeted compound/s. SFE is a selective process in which the process variables, such as pretreatment to plant material, temperature, pressure, particle size, moisture content, solvent flow rate, extraction time and co-solvents (usually 1 to 10 percent) are varied according to the target compound to be extracted.2

Pretreatment of the plant materials is an important step in preparation for SFE extraction. Pretreatment of the plant usually involves drying to reduce the moisture content and grinding for size reduction.3 As water is polar in nature it may hinder the non-polar solvent like CO2 and reduce the efficiency. Pressure and temperature are the interrelated parameters as they directly affect the solubility of the target 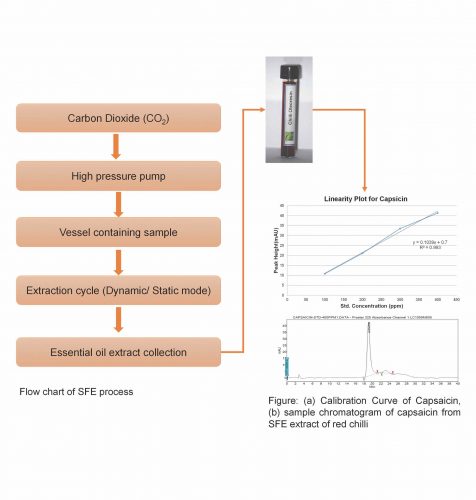 compound as well as the solvent. Solvent flow rate and extraction time are also important parameters as they directly affect the throughput of the process and economics, hence they should be carefully controlled to improve the economics of the SFE process. Grinding reduces the particle size and impermeable plant tissues, thereby increasing the surface area for its interaction with the solvent. Hence, the smaller the particle size, the greater the extraction of target compound is expected; however, too small a particle size may create a compact bed and affect the diffusion of solvent into the solid matrix. The heat generated during the fine grinding of the plant material has to be controlled in order to avoid loss of volatile compounds. The application of low temperature grinding, such as cryogenic grinding, may further improve the grinding process, which results in high quality powder. In one of the studies conducted at Anand Agricultural University (AAU) on cryogenic grinding of coriander (Coriandrum sativum L.), it was observed that during the ambient grinding the amount of volatile oil obtained was 0.133 percent whereas in the case of cryogenic grinding the amount of volatile oil content was 0.607 percent. This indicated that in the case of cryogenic grinding 22 percent more volatile oil was retained as compared to ambient grinding. Similar studies have been conducted at AAU on cumin and cardamom and process parameters have been optimised.

Due to the many process variables that affect the efficiency of the SFE extraction, systematic studies at lab scale are required for each product, which may have a different set of optimum process variables for the extraction of the target compound. There are different solvents, such as pentane, ethanol etc., that can be used in the SFE process, however, CO2 is the most widely used in industry due to its many advantages. These include a low critical pressure (72.8 bar) and temperature (30.9 °C); the fact that it’s relatively non-toxic, non-flammable, low cost and can be easily removed from the extract leaving no residue. With the recent advances in SFE technology, it is now possible to recycle the CO2 after decompression so that operational cost and emission in the atmosphere can be reduced.

SFE can play a critical role in the nutraceutical and functional food industries because of its ability to extract product without solvent residue, high purity and no degradation of active compounds.4 There 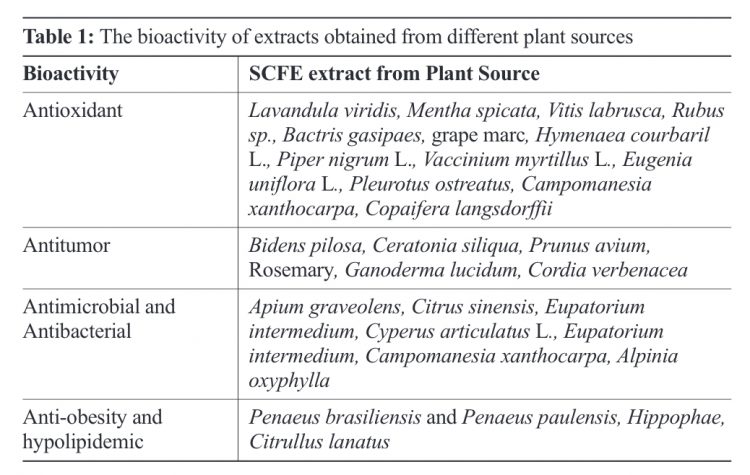 have been extensive scientific studies reported on the extraction of different bioactive compounds, such as essential oils, phenolic compounds, vitamins, alkaloids, natural colours, etc., which were extracted from different parts of the plant. Some plant sources from which the bioactive compounds were extracted and studied are mentioned in Table 1. SFE can also be used to remove undesirable compounds such as organic pollutants, toxins, and pesticides. The bioactive compounds play a major role in improving human health and diet by acting as antimicrobial, antifungal, antioxidant, anti-inflammatory and other health promoting actions.

Essential oils are the volatile oils obtained from the plant sources and they impart characteristic flavour and fragrance to food products. SFE has been extensively studied for extraction of essential oils from different plant sources. Some studies conducted at AAU, Anand are presented in Table 2. For example, in the case of essential oil extraction from mint, carvon was the target compound. Based on the 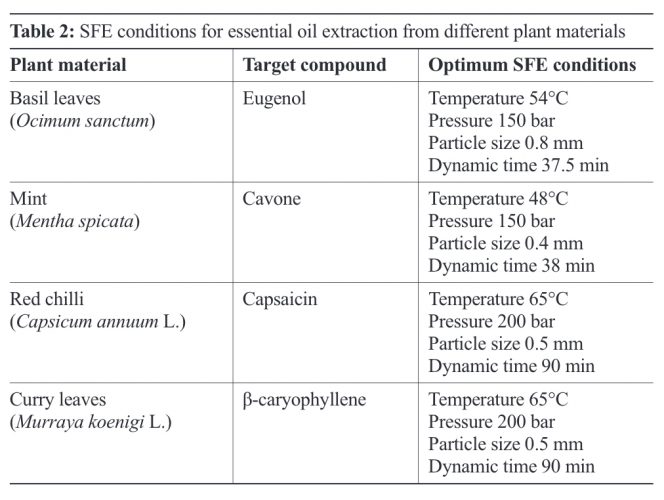 systematic study using experimental design, the optimum condition having maximum carvon extracted from mint leaves was identified. All the samples were analysed using GC-MS for their carvon content. The bioactivity of the essential oil from mint was also evaluated in terms of antimicrobial activity and highest antimicrobial activity against E. coli and a moderate activity against S. typhi and S. aureus was observed. In many reports the essential oils are reported as having bioactive properties, such as antioxidant activity, antimicrobial and anti-inflammatory. Essential oils are conventionally extracted from hydrodistillation and solvent extraction. The high temperature used in hydrodistillation may degrade the essential oil and alter their chemical structure, thus affecting their natural quality attributes. However, SFE technologies have been reported to be of superior quality than the conventional extraction technologies.

Apart from extraction of the bioactive compounds, SFE technology has been reportedly used for supercritical drying, coating/impregnation and particle formation which have opened up new research areas for their applications in the pharmaceutical and nutraceutical industry. Supercritical drying has been used for the drying of wet gels, while reducing the shrinkage and resulting in a superior gel matrix.

Particle design is also one of the emerging research areas where supercritical fluids are used in design and generation of particles, microspheres and microcapsules, which may find applications in pharmaceuticals and nutraceutical products. With the latest developments in SFE technology and extensive research carried out in the past, it may be concluded that this technology has enormous scope in high quality bioactives extraction from plant and other sources, to meet the current global demand of SFE extracts.

R. Swami Hulle obtained his PhD from the Indian Institute of Technology Kharagpur in Food Process Engineering in 2015 and is presently working at Anand Agricultural University, Anand (AAU), India as Research Associate. He has published his PhD research work in international peer reviewed journals; his areas of interests include new product development, non-thermal processing, and supercritical fluid extraction.

F. Sutar obtained his PhD from Indian Institute of Technology Delhi in Thermal modelling in 1995 and is presently heading the Department of Post Harvest Engineering and Technology at the College of Food Processing Technology and Bio-Energy (FPTB & E), AAU Anand, India. He has more than 27 years of Teaching as well as Research Experience. Sutar has guided 16 post graduates for their Masters and Doctoral research. His areas of interest include post harvest technologies of fruits and vegetables, food processing and cryogenic grinding. At present he is working on several government funded projects.

R.V.Prasad obtained his PhD in Dairy Microbiology from the National Dairy Research Institute, India, in 1991. He has 16 years of industrial research experience at Aseptic Soy milk processing plant (4 years) and Amul Dairy, Anand (12 years in Quality Assurance). He joined AAU in 2009 and is presently heading the Department of Food Quality Assurance at College of FPT & BE. He was associated in executing a modern Food Quality Testing Laboratory and he is active in the method standardisation of various protocols in food testing. Prasad has guided 14 post graduates for their Masters and Doctoral research and his research areas include SFE of bio actives, microencapsulation of probiotics and non-thermal food decontamination technologies.