When the term ‘superfood’ was coined back in 1990 few could have envisioned how ubiquitous it would become. Fast forward 27 years and it seems every food outlet sells quinoa and kale as a staple ingredient of every dish, and every month some other food claims the title for itself. But is there any validity to the claims being made on behalf of ‘superfoods’ and how are they changing the industry? 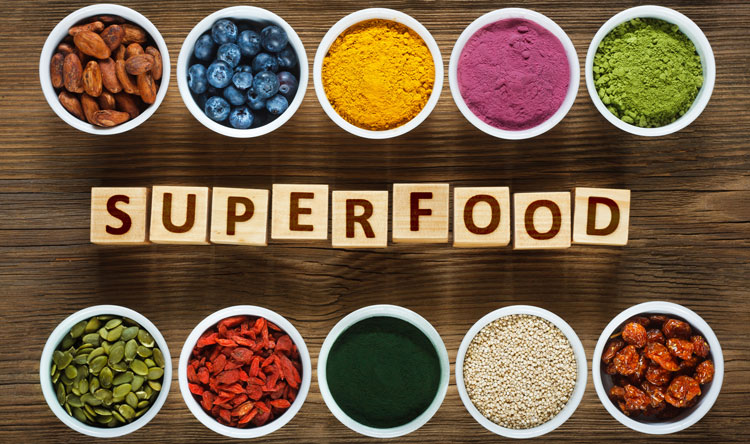 With celebrities endorsing superfoods left, right and centre, it isn’t hard to understand why so many people are eager to believe that just adding a single magical ingredient to their meal can undo the damage caused by everything else they consume. The general public is becoming ever more conscious of the harm done by sugar, salt, fat et al and is eager to believe that a handful of blueberries will see them live forever in perfect health.

This isn’t that much of an exaggeration. Though the term superfood has been dismissed by many dieticians and nutritionists, there are still a great many who believe that just adding these wondrous ingredients to their diet can cut the risk of heart disease, alleviate strokes and stave off cancer.

Specifically, there are die-hard fans who will insist that blueberries can do all of the above and improve your memory. However, the NHS clarifies that, though blueberries are a great source of vitamin K and a decent source of vitamin C, fibre, manganese and other antioxidants, the evidence that they prevent heart attacks is purely correlative and correlation does not equal causation. A small study, conducted in 2015 of 48 post-menopausal women, found that women who were given blueberry powder supplements over the course of eight weeks experienced a small, but clinically significant, drop in blood pressure. However, such a study with such a small sample size can hardly be considered conclusive. As for cancer, there is very little evidence that blueberries can help prevent the condition.

Goji berries meanwhile, have been promoted by A-listers including Madonna and Miranda Kerr. They have been used in Chinese medicinal practices for thousands of years and have convinced many in the 21st century that they can boost the immune system, brain activity, protect against heart disease and cancer and improve life expectancy. However, according to the British Dietetic Association “there is no reliable evidence to support these alleged health benefits.”

The berries certainly contain vitamin C, vitamin B2, vitamin A, iron, selenium and other antioxidants. A small study was conducted nine years ago which found some small link between goji berries, digestion and ill-defined feelings of ‘wellbeing’ but the study included only 34 people and the results are considered inconclusive.

Then there is wheatgrass, one of the oldest superfoods. Or at least one of the first foods to retrospectively claim the title. US chemist Charles Schnable was investigating wheatgrass as long ago as the 1930s. Many still insist it has a higher nutritional content than any other vegetable product and that it protects against inflammation, improves circulation and aids in the production of red blood cells.

In reality, wheatgrass is a source of chlorophyll, vitamin A, vitamin C, vitamin E, iron, calcium and magnesium. Rigourous testing, however, has proved that it is no better a source than everyday spinach or broccoli.

Fans of wheatgrass also believe that because chlorophyll and haemoglobin (a protein that carries oxygen around your body) are similar in structure, taking wheatgrass juice enhances haemoglobin production. But as far as evidence goes, there is no scientific proof to support this claim.

As with most other superfoods however, there are small studies that point to a correlation between consumption and health benefits. A 2002 study found that people suffering from an inflammation of the colon saw their symptoms improve after they were given 100ml of wheatgrass juice daily for a month.

This trend applies to almost all superfoods. There is just enough evidence to give hope to supporters that there may be genuine benefits to those consumers willing to add a handful of berries, a sprinkling of quinoa or a couple of spoonfuls of avocado to their diets. The scientific community as a whole however, remains far from convinced.

So far so good, but how is the superfood trend impacting consumers and manufacturers and what effect might it have on the future of the food and beverage industry? Even the largest companies are taking the superfood trend into consideration with McDonalds, Pret a Manger and Coca-Cola releasing versions of their products laden with superfoods. The industry has already aligned itself with healthier options as well as the increasing prevalence of gluten-free, vegetarian and organic consumers.

There is every reason to believe that superfoods could follow the same pattern. Governments across the globe, including Mexico, Hungary and the UK have already started introducing sugar taxes and levies. Similar actions have been mooted when it comes to fats, salt and general calorie content. New product developers are already hard at work replacing sugar and salt from meals and products without changing the taste, appearance or texture of well-known brands. There remains the potential that superfoods could play some part in this process.

There can be issues with sourcing however. Most ‘standard’ ingredients are part of a supply chain that is now decades, even centuries old. Plenty of superfoods had, until recently, been found only in those parts of the world where they were indigenous or in niche shops and on niche websites. Many have criticised the methods used in providing these superfoods and also questioned what the foods are contaminated with. If we are to hear out the small studies that claim these foods have medicinal benefits, it only seems fair to listen to those who claim there are also alarming levels of metals present within them. A job for food analysts across the globe.

There is also the implications for shelf life. Consumers are demanding that their food now lasts longer than ever before, but always tastes fresh. That it is convenient whilst remaining tasty. Superfoods do not just fall into one general category when it comes to their longevity. Some, such as Quinoa can last years, and even for many months after cooked. Others such as blueberries will only last a week or so, even when refrigerated. This will mean the industry needs a unique solution for individual superfoods and won’t be able to fall back on a one-size-fits-all solution.

That being said, if superfoods continue to grow in popularity and, who knows, get full scientific backing for even some of their claims, it may all prove worth it in the end.