Natural resistance in bacteria to biocides 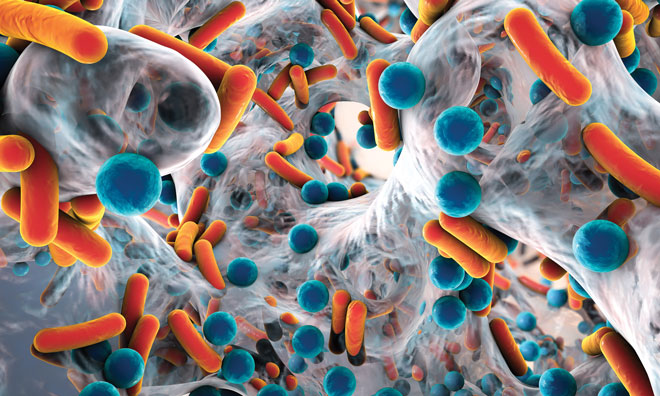 The food industry uses biocides to prevent pathogenic microbes contaminating equipment as well as the food being processed. There is strong evidence to suggest that biocide resistance and antibiotic resistance in bacteria may be linked. This is called biocide-antibiotic cross-resistance or cross-tolerance.

The most susceptible Gram-positive bacteria have no extra layers outside their peptidoglycan layer that can protect them from antimicrobial attack. Small molecule biocides, such as alcohols, aldehydes, phenols, QACs and biguanides have no problem penetrating the Gram-positive cell wall, which makes them the most sensitive of the bacteria. Gram-negative bacteria, however, have an outer membrane layer composed of a lipid bilayer and a lipopolysaccharide (LPS) layer outside the outer membrane protecting them from outside influence, making them less susceptible. They can also regulate the permeability through decreasing the synthesis of porins, the proteins that are involved in the uptake of biocides and antibiotics1.

The most resistant Mycobacteria have a complex cell wall outside their peptidoglycanpolysaccharide layer – a waxy layer and a lipid layer – making them the least susceptible of the vegetative bacteria. It is the mycoylacylarabinogalactan and arabinogalactan/arabinomannan in the cell wall that makes it almost impossible for biocides to reach the target sites in Mycobacteria2 . The bacterial endospores of Bacillales and Clostridiales (Figure 1) species are far more resistant to antimicrobials than all vegetative bacteria. Their spore wall is composed of layers that differ from the vegetative cell, which protect them against biocide action3 . The outermost layer, the exosporium, is a protein layer that protects the spore from antimicrobials and enzymes and forms the first defence. The outer membrane layer (outside the cortex) does not play a role in the permeability barrier. A peptidoglycan-containing germ cell wall surrounds the plasma membrane. 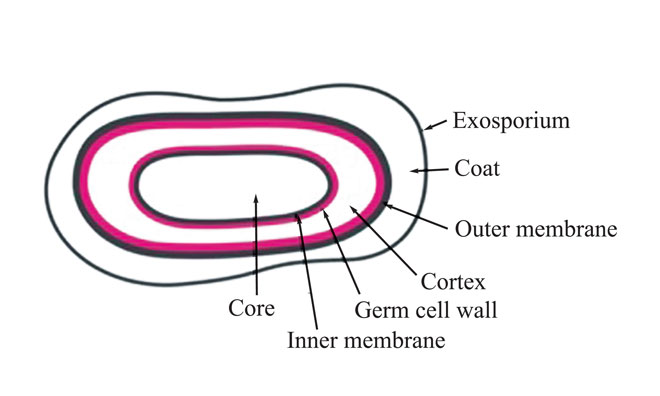 The plasma membrane containing immobilised lipids forms a permeability barrier against small molecules, protecting the DNA, RNA and enzymes in the core. This lipid layer is thought to be the reason that the plasma membrane is so effective in protecting the spore core DNA from damage by biocides. Microorganisms other than bacteria and bacterial endospores – the fungi and enveloped viruses – are more susceptible to biocides than Gram-positive bacteria, the enveloped viruses being the most susceptible.

Another important form of natural resistance in bacteria is the formation of biofilms. Bacteria naturally prefer to live together in close contact with each other and not as planktonic (single cell or free floating) individuals. Biofilms are highly organised communities of bacteria cohabiting in extracellular polymeric substances (EPS) slime, consisting of polysaccharides, protein, lipids, phospholipids, nucleic acids and humid substances4,5; of which protein and polysaccharide accounts for 75-89 % of the slime composition6 . The EPS protects the biofilm community against threats from outside, such as biocides. It has been found that bacteria in biofilms are less susceptible to antibiotics and biocides.

The position of the bacteria in a biofilm reflects their susceptibility to biocides; having the most susceptible strains living underneath and the least susceptible strains on the top. The biocide concentration underneath is sub-optimal and might select for resistance in the bacteria living there. Biofilms that have the chance to stick firmly to the surface are more resistant to biocide attack than biofilms left there for only a few hours. Bacteria inside a steady-state growth biofilm can withstand biocide concentrations that are many times greater than their planktonic ‘sisters’ of the same strain. Reduced susceptibility to Triclosan has been found in Salmonella and in Proteus/Providentia7,8. In Enterobacter sakasakii an increased survival was found after exposure to QACs9 ; resistance to peroxides of Listeria in biofilms was found after their exposure to them10.

A biofilm is built up with advanced architectural structures with a tangled system of nutrient supply, water supply and waste matter drainage systems, with bacteria having their own way of communicating (Figure 2). This communication system – a self–organisation and regulation system of the bacterial cells – facilitates adaption to changing environments through modulation of gene expression11. It is called ‘quorum sensing’ and makes it possible for bacteria to communicate with each other through small diffusible organic signal molecules, called auto-inducers (AI), that are excreted and accumulate around the cells during growth. If the cell concentration is high, this results in a sufficient concentration of the signal molecule to start the expression of genes that are involved in biofilm development, especially attachment and detachment. The bacteria are using a different ‘language’ (another signal molecule) between bacteria of their own species, than between other bacteria of different species.

In Gram-positive bacteria the signal molecules are oligopeptides. These biofilms can harbour single- or multi-species bacteria, in a single layer or three-dimensional structures. There are many different biofilms and under different environmental conditions (different food productions) a single type of bacteria can make different kinds. The steps in the formation of biofilms are as follows:

As of yet there are no useful techniques that can prevent biofilm formation without having unwanted side effects. Attachment of the planktonic bacteria to the surface is the basis of a successful biofilm formation. The best strategy is to thoroughly clean and disinfect the equip – ment in time such that bacteria does not have the chance to firmly attach to the surfaces. Cracks on the surfaces of equipment must also be avoided, because it makes it difficult to clean and therefore can be a place where biofilm formation starts.

An important factor in biofilm formation is the bacterial communication system, quorum sensing, that makes it possible for them to keep in contact with each other and communicate about every important issue in the development and maintenance of these ‘biofilm cities’ of bacteria. In the race to make new antibiotics, much work is carried out with aim of finding antiquorum sensing molecules that stop the bacteria from communicating. If it is possible to use these antiquorum molecules to stop biofilm formation, it will be easier to keep the equipment free from biofilms. This will make it possible to destroy all bacteria during the disinfection treatment and thus eliminate the problem of selection of resistant bacteria, resulting from the not fully effective use of biocides.

More detailed information on Bacterial resistance to biocides can be found in Andersen (2016)16.

Veslemøy Andersen has a PhD degree in general microbiology from the University of Oslo, Norway. Her career began as a microbiologist/researcher at The National Institute of Public Health, Oslo. After a postdoc at the University of Groningen, The Netherlands, she worked at the University of Applied Sciences in Eindhoven, The Netherlands, setting up the curriculum of a new study programme ‘Food Microbiology’. Currently she is working for the Global Harmonization Initiative (GHI), Vienna, Austria, as a microbiologist and editor of the new GHI book series on Nutrition and Health Aspects of Traditional and Ethnic Foods.