Microalgae: food of the future?

As we become more mindful of our and our planet’s health, microalgae seems to be an ingredient full or promise. New Food finds out why… 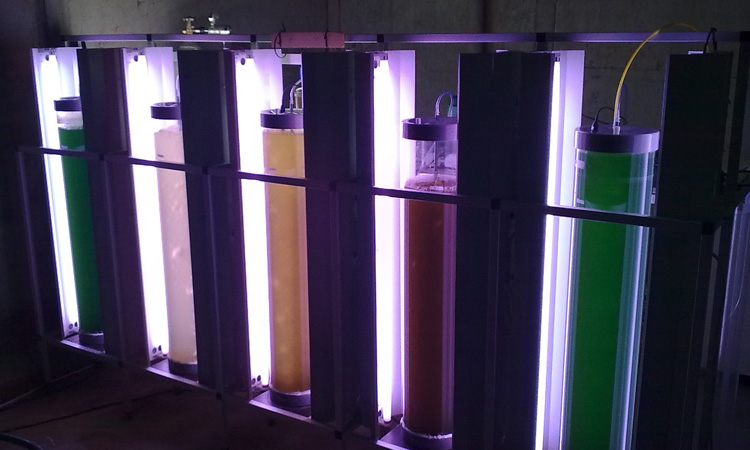 Microalgae is an ingredient full of potential, being rich in numerous health-beneficial compounds such as omega-3 long-chain polyunsaturated fatty acids (ω3-LC-PUFA).

Enriching food products with microalgae is an interesting strategy for creating healthy foods rich in ω3-LC-PUFA, but several challenges still need to be solved.

In a search for more sustainable food systems, microalgae are considered one of the most auspicious sustainable sources of food ingredients. Photoautotrophic microalgae have a higher growth efficiency compared to conventional crops, do not need arable land, and substantially contribute to capturing atmospheric CO2.1 While heterotrophic microalgae use other carbon sources and do not therefore contribute to CO2 capture, they are often characterised by an even higher biomass productivity.

Adding microalgae to food products would be a great strategy to enrich our diet in many nutrients and health-beneficial components. Particular interest goes to omega-3 ω3-LC-PUFA, which are essential in the development and functioning of the brain, and successful in the prevention of cardiovascular diseases. Given the limited sources of ω3-LC-PUFA in our Western diet, being only (fatty) fish and derived products, most consumers do not reach the recommended daily intake of 250 mg/day.2 In fact, fish only enrich themselves through consumption of microalgae, the latter being the only primary producers of ω3‑LC-PUFA.

In addition, microalgae are also a perfect vegan alternative source of ω3-LC-PUFA and other nutrients, such as proteins and minerals.

The most economic and sustainable strategy for introducing microalgae into our diet is the use of the whole microalgal biomass in food, instead of consuming isolated microalgal compounds. Yet this is not as easy as it sounds, there are several challenges to overcome in order to guarantee the overall quality of the enriched food products.

Several research groups at KU Leuven (Belgium) collaborated in the five-year research project (VEGETALGAE), investigating the potential application of incorporating microalgae either as whole biomass or as extracted oil into processed vegetable based products. 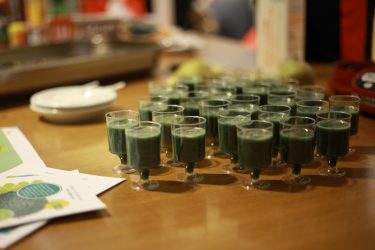 In principle, microalgae can be added to a broad range of food products, however, there are several reasons to opt for vegetable-based products as ideal carriers for microalgal enrichment. Firstly, they are essential components of a healthy diet, being rich in micronutrients and dietary fiber. Secondly, possible unfavourable effects due to the intense colour and flavour of the microalgae could be masked by a strategic selection of vegetables with a similar or dominant colour and flavour profile. But one of the major advantages is the presence of large amounts of natural antioxidants in vegetables, which could help to prevent ω3-LC-PUFA from oxidation.

Many vegetable-based products such as soups and sauces are subjected to different food processing operations. These include mechanical processes, like mixing and homogenising, but also thermal processes, such as pasteurisation and sterilisation treatments. With no previous knowledge on the impact of such processing steps on microalgae, we thoroughly studied the effect of food processing on microalgal food systems, hypothesising that they could give rise to an improved product quality. For example, by improving textural properties or by liberating encapsulated nutrients to improve their absorption in the body.

Due to the large number of double bonds in the chemical structure of ω3-LC-PUFA, these fatty acids are highly susceptible to lipid oxidation. This should be avoided, as it not only results in a loss of nutritional value, but it could also lead to undesired flavours and formation of toxic compounds. Different aspects may influence the oxidative stability of ω3-LC-PUFA, such as food processing operations and the presence of antioxidants. The latter are not only present in the vegetables, but also in photoautotrophically cultivated microalgae.

First of all, the use of whole biomass (be it as intact cells or disrupted cells) is largely preferred over the use of ω3-LC-PUFA-rich oil extracted from the microalgae. This was concluded from the higher oxidative stability of the ω3-LC-PUFA during processing (high pressure homogenisation followed by pasteurisation or sterilisation) and subsequent accelerated storage. The enhanced oxidative stability was attributed to the fact that many more antioxidants were introduced when using microalgal biomass compared to extracted oil.3

Regarding the microalgal source, photoautotrophic microalgae showed to be oxidatively stable in vegetable products, in contrast to heterotrophic microalgal biomass. This stability was attributed to the antioxidants (carotenoids in particular) present in the photoautotrophic biomass, preventing the ω3 LC-PUFA from being oxidised.4,5 Due to the different cultivation process, heterotrophic biomass lacks carotenoids. In spite of the antioxidants present in the vegetables, which did retard the oxidation reactions regardless of the vegetable source, oxidation processes still occurred when heterotrophic microalgae were used, resulting in a lower product quality.5,6

Considering a good selection of microalgae source (photoautotrophic species instead of heterotrophic ones) and dosage form (biomass instead of extracted oil), vegetable products enriched in ω3-LC-PUFA can be created that are predicted to be oxidatively stable for at least two years under refrigerated storage, or for one year when stored at room temperature.

But even within the photoautotrophic microalgae, a large diversity was observed in amount and type of structural biopolymers.7 In fact, when using non‑treated biomass in food products, thickening was only induced by Porphyridium, a microalga with a specific type of extracellular polysaccharides.8,9

However, we proved that the texturising capacity of several other microalgae (including Chlorella and Spirulina) could be unlocked by different food processing operations, in particular combinations of high pressure homogenisation and thermal processing. In general, the former treatment resulted in cell disruption, thereby releasing structural biopolymers from the inside of the cells, which could then interact due to heat-induced reactions during the latter treatment.8,10

Enhancing digestion and absorption of the nutrients

The use of processing is not only beneficial for creating microalgae-based texturisers, it might also enhance the nutrient absorption in our body after consumption in case of enrichment with whole microalgal biomass. Most of the nutrients are actually localised inside the microalgal cells, which are often surrounded by strong cell walls. As these cell walls cannot be digested, they presumably hinder the release of the nutrients in our gastrointestinal tract, and therefore limit the health benefits of the microalgal compounds.

To investigate this hypothesis, we performed in vitro digestion experiments, ie, simulating human gastrointestinal digestion in the lab. Apart from the digestibility of macronutrients (in our study lipids), we also investigated the amount of health‑beneficial components (in our case ω3‑LC‑PUFA and carotenoids) that is accessible for absorption, defined as bioaccessibility.

It was shown that by disrupting microalgal cells prior to in vitro digestion, the bioaccessibility of ω3 LC-PUFA and carotenoids drastically improved, up to three times higher than for non-treated biomass.11 Hence, if microalgae are added to our diet for their unique nutritional profile, the microalgae should preferably be consumed as disrupted cells to guarantee the health benefits upon consumption.

Food of the future?

This research project showed the large potential of using microalgal biomass in vegetable-based food products. Although the antioxidants in vegetables aid in improving the oxidative stability of the ω3‑LC‑PUFA, the endogenous antioxidants present in the (photoautotrophic) microalgae seem to play the major protective role. As such, it can be concluded that photoautotrophic microalgae show large potential as a sustainable source of ω3-LC-PUFA for use in a range of processed food products.

Moreover, mechanical and thermal processing steps are concluded beneficial, not only for unlocking the texturising capacity of the microalgae, but also for enhancing the nutrient bioaccessibility upon digestion.

In spite of these highly promising results, there is still a long way to go. To date, only a limited number of microalgal species are approved under the strict regulations on food use (eg, Novel Food regulation in the EU). Beside ω3-LC-PUFA-rich oil extracted from certain heterotrophic microalgae, only Spirulina and Chlorella are finding their way to the market as whole biomass, albeit as food colourants or for marketing strategies rather than for enhancing nutritional value of the products, given the low incorporation concentrations (typically below 0.5 percent).12

Moreover, these two microalgae are not sources of ω3-LC-PUFA, and the food industry should explore other microalgae to contribute to enriching our diet with ω3-LC-PUFA.

Tom Bernaerts is a postdoctoral researcher at Laboratory of Food Technology, KU Leuven, Belgium. He obtained his PhD degree in Bioscience Engineering in 2019 with research on the role of food processing on the texturising capacity and the nutrient bioaccessibility of microalgae.

Lore Gheysen is a postdoctoral researcher at Lab of Food & Lipids, KU Leuven Campus KULAK, Belgium. She obtained her PhD degree in Bioscience Engineering in 2019 with research on the oxidative stability of omega-3 long-chain polyunsaturated fatty acids from microalgae.

Ann Van Loey is a Professor at the Laboratory of Food Technology, KU Leuven, Belgium. She holds a PhD degree in Applied Biological Sciences, obtained in 1996. Her research focuses on process-structure-function relations in food systems (particularly fruit and vegetable-based products) during processing. In 2017, she received her status as Thomson Reuters Highly Cited Researcher in the domain of Agricultural Sciences.

Imogen Foubert is Associate Professor at Lab of Food & Lipids, KU Leuven Campus KULAK, Belgium. She holds a PhD degree in Applied Biological Sciences, obtained in 2003. Her research focuses on the oxidative stability and functionality of lipids in food systems.

2 responses to “Microalgae: food of the future?”