This week, Arla Foods and its farmer owners are urging the UK Government to recognise and protect the future of dairy farmers 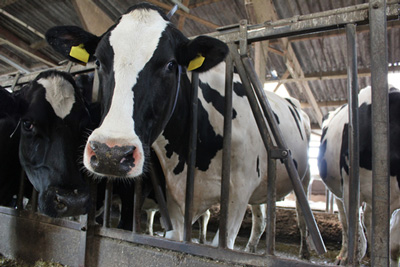 This week, Arla Foods and its farmer owners are urging the UK Government to recognise and protect the future of dairy within the forthcoming Brexit negotiations or risk undermining a key sector within the UK economy. Drawing on findings from a recent economic impact assessment carried out by independent economics consultancy Centre for Economics and Business Research (Cebr), Arla is warning that the contribution made by its business and farmer owners to the UK economy would come under severe pressure if Brexit negotiations lead to significant restrictions on free trade and quotas.

According to the report, Arla’s total economic footprint in the UK is valued at more than £6 billion in Gross Value Added (GVA) terms once multiplier effects of direct and indirect impacts are factored in. This is equivalent to 0.52% of the entire UK business economy and 0.33% of UK GDP. For example, for every £1 of GVA generated by Arla’s dairy business in the UK, another £14.91 is stimulated in its supply chain and in the wider economy.

Further, the report concludes that the combined businesses of Arla and its farmer owners directly supports more than 50,000 jobs in the UK and can be indirectly associated with more than 119,000 jobs in total, which equates to a 0.51% share of employment in the entire UK business economyand 0.38% of whole economy employment.

Like many businesses, Arla and its farmer owners rely on free trade, particularly when it comes to exporting – in 2016, Arla exported to 21 countries within the EU and 48 outside of it. In addition, the UK also imports a number of popular Arla products from elsewhere in the EU.

“Our business and our farmer owners make a major contribution to the UK economy, playing a key role in the UK food and farming sector, which is estimated to be worth over £100 billion.

“While it’s true that Brexit will bring opportunities that we are ready to embrace, ending tariff-free trade should be seen as a major risk. We need assurances that the transitional arrangements we are likely to require before a free trade agreement between the UK and the EU is agreed are tariff- and barrier-free. To do otherwise will be detrimental not only to us but to many other organisations.

“That’s why we’re calling on Government to protect the health of the British dairy industry and its broader benefits to the wider UK economy and, in doing so, ensuring agriculture and food and drink production are front and centre of its negotiation efforts.”

Oliver Hogan, Director at Cebr and principal author of the report said:

“The true extent of Arla’s economic ‘footprint’ in the UK cannot be underestimated. It’s a business that is deeply embedded in the British economy, not only through its farmer owners and core dairy business, but also through a large and wide-ranging domestic supply chain and through its downstream links with the distributive trades (retail and wholesale).”

The farmer-owned company in the UK had a revenue of €2.53 billion in 2016 with circa 2,500 of its owners in the UK. Home to a range of well-known brands including Anchor, Castello, Cravendale and Lurpak, as well as the Arla brand itself, Arla is responsible for almost a third (29.4%) of the entire UK dairy manufacturing industry.

Being farmer-owned means the profit it makes goes back to those farmers.

“The triggering of Article 50 has fired the starting gun to the Brexit negotiations and it is important that British dairy is not left behind. This analysis shows what could be at risk but also the opportunity following the negotiations. We are eager to make Brexit work in a way that supports Arla and its farmer owners.”