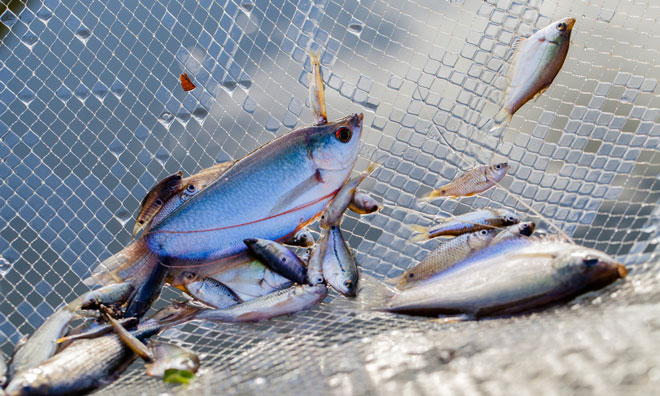 Fishing typically removes the large individuals from the population. Over time, this not only leads to evolutionary shrinking of fish but it also erodes natural trait variability in fish stocks. This was demonstrated in a study partly funded by the Academy of Finland where researchers experimentally harvested zebrafish. The loss of natural trait variability is an alarming observation, as variability facilitates population viability in changing environments. Intensive and selective removal of large individuals by fishers can act as a pronounced directional selection force, leading to evolution towards smaller body sizes. In addition to evolutionary downsizing, fishing can also reduce size and growth variation among individuals. Preserving variability is important: a population harbouring variation is less susceptible to changing environments and catastrophic disturbances. For example, when food availability is low, individuals that grow slowly will survive while fast-growing individuals will starve. Therefore, populations that consist of individuals growing at different rates will be better off in fluctuating environments.

The experimental study, conducted by an international team of researchers, focused on the effect of size-selective harvesting on body size variation.

“We’ve studied the evolutionary effects of size-selective harvesting for quite some time,” says Postdoctoral Researcher Silva Uusi-Heikkilä from the University of Turku.

Decreased size variation caused by fishing can have serious consequences for the resilience and recovery of exploited fish stocks. It can negatively affect the population’s ability to buffer environmental changes, decrease the rate of evolutionary rebound and, ultimately slow down recovery from over fishing.

“Sustainable fisheries management should not only manage fish stock abundances but also variability within a stock,” says Uusi-Heikkilä.

The study was funded by the Academy of Finland, AXA Research Fund, Kone Foundation, Ella and Georg Ehrnrooth Foundation and Leibniz Community grants.

By Academy of Finland