In Germany, the first lupin drinks are now available in aseptic carton packs from SIG Combibloc, under the umbrella brand “MADE WITH LUVE”… 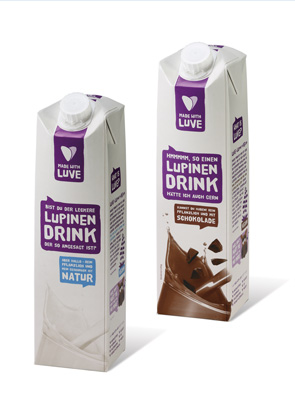 With their white-flowering umbels, not only are Sweet Blue Lupins pretty to look at, but right now they are also attracting the interest of the food industry. Researchers from the Fraunhofer Institute for Process Engineering and Packaging (IVV) in Freising, Germany, and Prolupin have found a way to produce the unique, purely herbal lupin protein isolate (LPI), which is similar to animal proteins, from lupin seeds. The researchers received the Deutsche Zukunftspreis 2014 (the Federal President’s award for technology and innovation) for this innovative process. On the European market, the high protein content of lupins could make the plant a climate-friendly and GMO-free alternative to soy beans imported from Asia and South America. In Germany, the first lupin drinks are now available in aseptic carton packs from SIG Combibloc, under the umbrella brand “MADE WITH LUVE”.

Lupin seeds are similar in composition to soybeans

In ancient Egypt, Greece and South America, lupin seeds were considered a high-value staple food. However, because of the bitter compounds they contain, people lost interest in them. Through careful breeding, in the early 20th century the Sweet Blue Lupin with much lower alkaloid content was developed. With between 36 and 48 per cent protein content, lupin seeds are extremely high in protein, and in material composition they are similar to soybeans. Lupin seeds contain all the essential amino acids – including lysine. That makes lupin protein particularly high-quality. The fat content of lupins is four to seven per cent – so sweet lupins are much lower in fat and have less allergy potential than soybeans. In addition, lupins are free from starch, cholesterol and gluten, and they are a good source of minerals and trace elements.

Malte Stampe, managing director of Prolupin GmbH, said: “The seeds of the native Sweet Blue Lupin are the raw material for the protein, which we extract using a patented and very gentle process developed by the Fraunhofer IVV. In foods, milk, meat and egg can be replaced with the protein – making lupins of interest for vegetarians, vegans and anyone else who wants to eat a healthy, varied diet that is also climate-friendly. Lupins flourish particularly well in sandy soils such as those found in northern and central Europe – they can therefore be grown on the soils here, and also harvested and processed here. Lupins thus have a CO2 bonus compared to soybeans. We don’t need to fly the lupins halfway round the world, thus avoiding the CO2 emissions generated by long transport routes. And lupins are even good for the soil, enriching it with nitrogen.”

One response to “Lupin drinks in carton packs from SIG Combibloc”