The campaign uses tongue-in-cheek humour to get the food safety message across, featuring Santa Claus stricken by a bout of food poisoning… 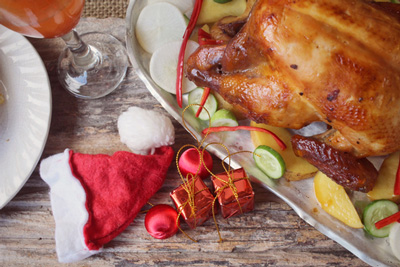 The campaign uses tongue-in-cheek humour to get the food safety message across.

The campaign encourages people to make sure food poisoning is the last thing on their Christmas list.

The campaign uses tongue-in-cheek humour to get the food safety message across, featuring Santa Claus stricken by a bout of food poisoning.

Glasgow shoppers and commuters will be targeted with food safety advice at Glasgow Central Station on Tuesday 15 December and Buchanan Galleries on Friday 18 and Saturday 19 December where Santa’s elves will be handing out campaign materials featuring useful food safety tips to help make sure food poisoning is the last thing on their list. It’s hoped the advice will lead to more people following the Four Cs of food safety: cleaning, cooking, chilling and avoiding cross-contamination, with specific advice on the storage, preparation and cooking of turkeys and leftovers.

Geoff Ogle, Chief Executive of FSS, warned poor preparation and cooking larger meals than normal is what can lead to a spike in illness. He said: “Christmas is a time for all the family to come together and enjoy themselves and food plays an important part of that.

“Home cooks are usually preparing larger quantities of food from party snacks to turkey roast dinners. When you’ve got a lot to do in the kitchen and in a hurry you can take your eye off the ball when it comes to hygiene, and when that happens there’s more scope for things to go wrong.”

Geoff Ogle said there are number of simple things that people could do to help reduce food poisoning infections. He added: “These should include allowing adequate time to defrost your turkey in the bottom of your fridge or somewhere cold: large turkeys can take a couple of days. If it’s not completely de-frosted it can mean inconsistent cooking through the bird and won’t get rid of bugs like campylobacter which can cause food poisoning.

“Also make sure it’s cooked through until the juices run clear, store leftovers in the fridge and eat them within two days unless they’ve been frozen, and re-heat them just once. And keep your fridge temperature at 0-5°C.”