Excess intake of fat is linked to obesity as well as the concurrent civilisation associated diseases that can also occur with being overweight. Dietary sodium has also been linked to hypertension in about 20% of the population, consequently increasing the risk of cardiovascular disease (CVD). Processed meat products are major sources of fats and sodium in the diet in the form of sodium chloride (table salt). Thus, consumers are demanding meat products with lower levels of these components, and the food manufacturing industry has commenced reformulation to meet this growing need.

The use of salt, nitrates and nitrites in preserving processed food products was vital in the past, but the enhancement of in-plant hygiene through effective implementation of hazard analysis critical control points (HACCP) and the advent of modern ingredients, packaging and refrigeration has reduced their processing roles and necessity to some degree. Due to consumer demand for cleaner labelled meats, the demand for products made without added phosphate is also increasing. For processed meats, there are several approaches that may be adopted to produce fat reduced products such as: using leaner meat, less fat and salt, more water, replacing parts of animal fat with plant oil, or the application of fat replacers1-5. Additionally, salt reduction can be achieved by using less salt in formulations or by using salt replacer ingredients that simulate the action of salt to varying degrees. The essential step in both cases is to use consumer driven sensory evaluation processes, as described in the following examples.

Salt and fat reduction without replacement

Many studies have looked at effective sensory-focused salt and fat reduction, without utilising replacement ingredients in processed meats including: beef patties6, breakfast sausage7, frankfurters8, white pudding1,9 and black pudding2,9 to mention but a few. These studies essentially, and sequentially, reduced salt and fat without using alternative ingredients, in order to determine sensory optima while maintaining safety, functionality and adequate shelf life. Reductions in salt content could also be optimised by using packaging technologies to compensate for loss of safety or shelf life stability of processed meat products4,9.

Salt and fat replacers can offer further possibilities with respect to reduction of salt and fat in processed meats. The most commonly used salt replacer is potassium chloride, although it is self-limiting due to its bitterness and metallic flavour when used above certain concentrations11. However, the bitterness perception of potassium chloride can be suppressed by using it in combination with further salt replacers. Zanardi, Ghidini, Conter & Ianieri12 successfully reduced the sodium content in Cacciatore salami, a typical Italian dry fermented sausage, by using a mixture of KCl, CaCl2 and MgCl2.

The use of ingredient replacers such as hydrocolloids (a range of polysaccharides and proteins) could also be applied in the meat processing industry, as they have been used in processed meat products for many years to improve properties such as water binding and texture due to their ability to thicken, gel, bind and stabilise emulsions and pH3,4. Hydrocolloids, based on animal proteins, include: casein, whey, gelatin and blood-derived protein. Additionally, an enormous range of polysaccharides are available on the market, such as: starches (corn, wheat, maize, potato, tapioca, pea), celluloses (carboxymethylcellulose), gums (guar, alginate, pectin, locust bean), fibres (ß-glucan), chitin/chitosan and xanthan derived from microorganisms13. Seaweeds such as Sea Spaghetti, Wakame and Nori are a rich source of minerals, trace elements, proteinaceous compounds and flavour precursors (reducing sugars), which can act as flavour enhancers, or even reactants in the flavour development process (Maillard reaction, caramelisation), and comprise a unique taste profile that might replenish lost flavour in reduced salt and fat processed meat products14.

Furthermore, salt enhancers such as amino acids (glycine, glutamate), lactates and yeast extracts have found applications in processed meat. These substances have no salty taste themselves, although with the combination of sodium chloride they are able to enhance the salty flavour15. Fellendorf, O’Sullivan, & Kerry explored the application of traditional and clean label ingredients as salt and fat replacers in black pudding products4 (Figure 1). These authors produced twenty-two black pudding varients possessing different fat (10%, 5%) and sodium (0.6%, 0.4%) levels, which were used as base formulations for 11 different salt and fat replacers. Compositional, physicochemical and sensory analyses (SAT and RDA) were then conducted. Black pudding samples with 5% fat and 0.6% sodium containing potassium chloride (KCl), a potassium chloride and glycine mixture (KClG), and seaweed, respectively, and 10% fat and 0.4% sodium containing carrageen were rated higher (P < 0.05) for spiciness and saltiness. Samples with 10% fat and 0.4% sodium containing KClG were rated positively (P < 0.05) for fatness. Samples with 5% fat and 0.6% sodium containing pectin and a combination of potassium citrate, potassium phosphate and potassium chloride (KCPCl), as well as samples containing 10% fat and 0.4% sodium with waxy maize starch (WMS) were liked (P < 0.05) for flavour and overall acceptance. 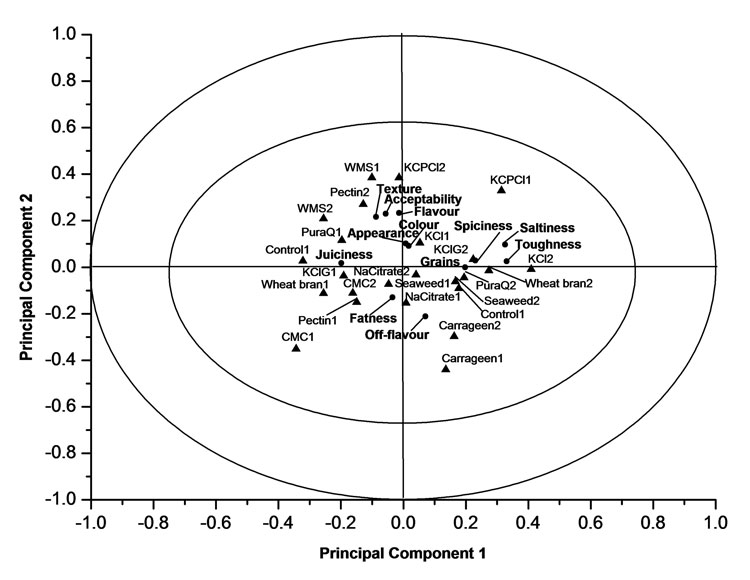 The Food Safety of Ireland (FSAI) recommends a sodium target level of 0.6% and an even lower sodium level (0.4%) was achieved. Additionally, Fellendorf, O’Sullivan & Kerry produced 22 white pudding formulations3 which comprised of two different fat (10%, 5%) and sodium (0.6%, 0.4%) levels and contained 11 different traditional and clean label ingredient replacers. Compositional, texture and sensory analysis (SAT and RDA) were conducted. Two formulations containing 10% fat and 0.6% sodium formulated with sodium citrate, as well as the combination of potassium chloride and glycine (KClG), were found to have overall acceptance (P < 0.05) by assessors. These samples showed higher (P < 0.05) hardness values, scored lower (P < 0.05) in fatness perception, and higher (P < 0.05) in spiciness perception. Hence, the recommended sodium target level of 0.6% set by the Food Safety Authority of Ireland (FSAI, 2011) was again achieved for white pudding products, in addition to a significant reduction in fat level from commercial levels, without causing negative sensory attributes.

In conclusion, highly accepted sensory optimised products, based on commercial recipes, can be created not only with lower fat levels, but also lower salt levels which meet regulatory targets. This provides the processed meat industry with a blueprint on how to commercially develop stable, healthier processed meat products that consumers prefer and which meet regulatory requirements. 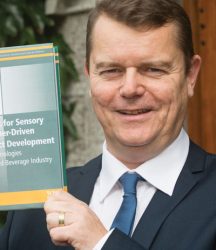 Maurice G. O’Sullivan is a college lecturer in Food Science at the School of Food and Nutritional Sciences at University College Cork (UCC). He has a Ph.D. in Sensory Science (2002) from Faculty of Life Science (LIFE), University of Copenhagen. Subsequent to his Ph.D. Maurice worked as flavour chemist with Diageo Baileys Global Supply. He is the author of A Handbook for Sensory and Consumer Driven New Product Development (Innovative Technologies for the Food and Beverage Industry). Sensory and consumer science are his principal areas of research. Contact: [email protected]

Joseph P. Kerry is a college lecturer and head of the Food Packaging Group in the School of Food and Nutritional Sciences at University College Cork (UCC). Primary research interests address various aspects of food packaging, shelf-life stability, food composition and numerous aspects of food quality, especially in relation to product sensory attributes. He also has very strong links with industry and his research team assists companies in relation to many aspects of new food product development. Contact: [email protected]