Feeding the world: a global challenge

The world is facing a crisis in global food security as the global population increases and diets change with economic development. Riaz Bhunnoo, Director of the Global Food Security programme, outlines the key challenges. 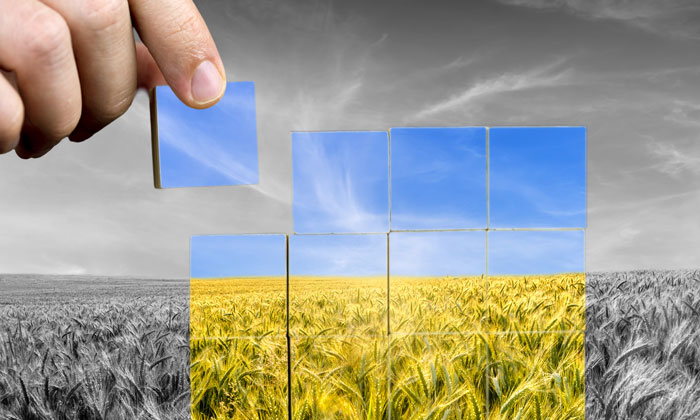 BOOMING: The world population is expected to reach 8.5 billion by 2030

The population is increasing, meaning more mouths to feed, and it is unlikely that this will stabilise by the end of the century. Recent estimates suggest that the population will rise to 9.7 billion by 2050.1 At the same time, diets are changing as incomes grow through economic development, which can have positive impacts in helping to lift people out of poverty and improving nutritional outcomes. However, richer people tend to both eat more food2 and more meat and dairy (Figures 1 and 2), which are resource intensive to produce and can have a higher environmental impact than other food types.3 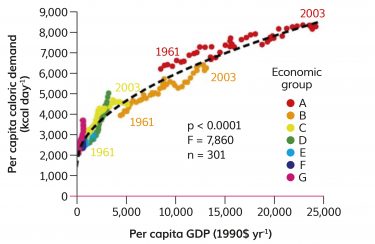 If diets continue as they are, it is estimated that we will need to produce more food in the next 50 years than we have ever produced in human history,4 (Figure 3) with the Food and Agriculture Organization of the United Nations (UN FAO) projecting that 60 per cent more food will be required by 2050.5

However, there are two major externalities not captured by the market that must be acknowledged – the impact on health and the impact on the environment. In terms of health, around one in three people globally suffer from some form of malnutrition – whether hunger, micronutrient-deficiency, overweight or obesity. Recent data suggests that there are now more people in the world who are overweight and obese than underweight, with the two combined accounting for more than half of the world population – a new normal.6 The trends in the data suggest that is likely to continue over time. 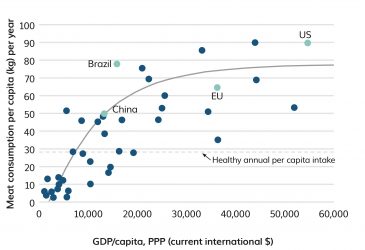 In terms of the environment, resources for agriculture are becoming scarce. If diets continue as they are, by 2050 we will need 120 per cent more water and 42 per cent more cropland, we will have lost 14 per cent of forests, and be generating 77 per cent more greenhouse gases. However, agriculture already uses 70 per cent of all fresh water and there is, by good approximation, no new land for agriculture.7 In fact, land area for agriculture is more likely to shrink due to urbanisation and rising sea levels, but also because we will need land for negative emissions technologies such as bioenergy, carbon capture and storage to meet the Paris Agreement target of a 1.5°C temperature rise. This agreement also requires net global emissions to reach zero by 2040-2060.8 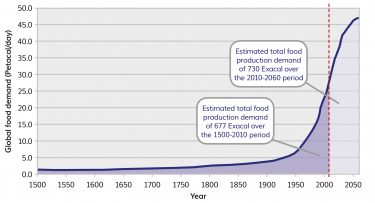 The impact of climate change

Climate change will make it more difficult to meet the food security challenge. Increased CO2 levels could increase the rate of photosynthesis and, in turn, yields; however, this has also been associated with a reduction in the nutritional content of crops, including protein and micronutrients such as iron and zinc. This will produce more calories but not necessarily more nutritious foods, which will impact on health. In addition, climate change can alter the distribution and severity of pests and diseases of crops and livestock, and it is estimated that around a quarter of our food production is already lost in this way.

Climate change predictions based on averages can help predict what can be grown and where in the world, and some countries will do better than others. However, these only provide a partial view, and it is the extremes that make up the average temperature and rainfall, such as heatwaves, cold snaps, floods and droughts, that will be challenging. 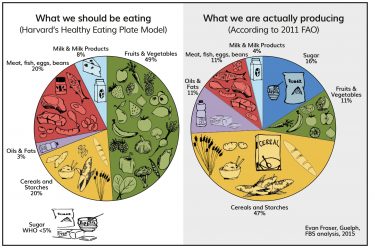 At the Global Food Security programme, our own analysis suggests that the risk of extreme weather hitting several major food-producing regions of the world at the same time could triple by 2040, so that a once in 100 years event could become a once in 30 years event. Climatic shocks do not only lead to a substantive yield loss – the impacts are channelled downstream via market and policy responses, such as export bans, for example, and lead to food price spikes. There is some evidence linking food price volatility and social unrest, and more research is needed on the link between climate change, food security and conflict.

Our food system is predicated on a small number of commodity crops. Comparative advantage, coupled with a range of policy levers to underpin production, drives the scales and concentration of production so that some areas become ‘breadbaskets’ for the rest of the world. Globalisation has significant benefits, both in terms of access to food that can be grown more efficiently and cheaply elsewhere, food that may be seasonal but which we want year-round, or food that cannot be grown in a particular country.

One consequence of this is that diets are becoming increasingly similar over time. According to the FAO, just 15 crop plants out of 50,000 provide 90 per cent of the world’s calorie intake, with rice, maize and wheat making up two-thirds of this. Large-scale agriculture has undoubtedly improved efficiency and reduced the price of food, but its scale, uniformity and lack of genetic diversity can reduce resilience to pests and diseases and extreme weather. It can also reduce biodiversity through monocultures, and has implications for nutrition, adding to the growing disparity between what we produce in the world and what we should be eating as part of a healthy diet (Figure 4). This suggests that we should be diversifying both food production and demand, with potential win-win-wins for health, sustainability and resilience.

Global agreements such as the Sustainable Development Goals and the Paris Agreement could be game changing in shaping future food systems. In terms of the latter, one analysis suggests that the food system will likely account for the majority of the carbon budget and a 2°C rise by 2050, if diets continue as they are.9 Given that the food system accounts for around 30 per cent of all greenhouse gas emissions, it should have a strong role in climate change mitigation. Our work on ‘Paris-compliant healthy food systems’ will identify the hotspots for reducing greenhouse gas emissions across the food system that could have simultaneous benefits for nutrition.10

The food industry has a significant role to play in making our food healthier and more sustainable. We are already seeing many companies changing their business models and embracing the trends being set by Millennials, who account for around a quarter of our population. Changing attitudes coupled with new technology will lead to a whole host of new food products in future, many plant-based, and with health and sustainability at their core.

Dr Riaz Bhunnoo is Director of the Global Food Security programme. He has worked at the Biotechnology and Biological Sciences Research Council (BBSRC, which formally leads on the multi-partner programme) since 2005, and in that time has undertaken secondments to the Research Councils UK (RCUK) Executive Directorate to work on cross-council research coordination and policy, and the Gates Foundation to work on Grand Challenge Explorations. @RiazGFS