Clean label: back to basics with ancient grains 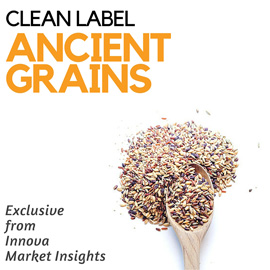 Ancient grains, such as chia, buckwheat, quinoa, hemp and amaranth, were once very popular basic food cereals, but faded away and became largely obsolete in many countries with the rise of modern cereal crops, such as wheat and corn.

Their resurgence reflects rising levels of interest in alternative grain products that are positioned as traditional, natural and nutritious, with the additional benefit that some can also be used in gluten-free formulations. According to Innova Market Insights data, numbers for products containing these grains have generally been rising markedly over the past decade, led by interest in quinoa and, more recently, chia.

Quinoa is a small, light-colored round grain with a distinctive nutty earthy flavour and is indigenous to South America, where the Incas regarded it as the ‘mother of all grains’. As well as in grain-based foods, including breakfast cereals, snack bars and biscuits, it is now also being used in products such as confectionery, beverages, ready meals and baby foods.

Chia is a Latin American annual herb high in protein, dietary fibre and antioxidants, with a high concentration of omega-3 fatty acids in its oil. Launches featuring chia as an ingredient range across a number of sectors, but are being led by cereal products, including breakfast cereals and cereal bars. Activity is also strong in bakery products, supplements and sports nutrition lines, with interest also apparent in ready meals, sauces and seasonings, dairy products, baby foods and soft drinks. Perhaps most significant for ancient grains, however, has been the move more squarely into the mainstream with Kellogg’s US launch of its Special K Nourish multigrain cereals and cereal bars made with quinoa in combination with oats, barley and wheat, which it followed in 2015 with the introduction of Ancient Grains Blend and two Ancient Grains Granolas as part of its new Origins line, marketed as made with simple ingredients.

Other cereals companies have followed suit, including Quaker with its Super Grains Oatmeal Blends, launched in early 2015 and featuring quinoa and flax, as well as oats, wheat, barley and rye. Meanwhile, General Mills introduced a new variant of its market-leading Cheerios cereal brand featuring ancient grains, including quinoa, spelt and kamut.

Another development indicating interest in returning to the eating habits of our ancestors, perceived to be simpler and more natural, is the rise of the so-called Paleo Diet as a weight-loss regime. It has grown to achieve almost cult status, particularly in the US, since its revival in the early 2000s. The diet takes us back to eating the way our Stone Age ancestors would have eaten 10,000 years ago, prior to agriculture and farming, with a diet of lean meat, nuts, fruit and vegetables, with no access to grains, legumes, dairy products and foods high in refined sugar and salt.

When looking at use of the word “paleo” in launch activity tracked by Innova Market Insights, a huge surge has been seen over the past five years, from single figures in 2010 to over 200 in the 12 months to the end of July 2015. Although this remains very small in terms of global launch activity totals, it is nearly double the number recorded in 2014 and much more significant in the US, which accounted for over 80% of the global total. The leading product categories included cereals, bakery products and snacks. Recent launches include products such as Paleo Cookies and Paleo Protein Bars from Julian Bakery, Paleopure Trail Mix from Paleopure and Steve’s Paleocrunch Granola and Paleogoods Paleobars, all in the US.