Innova Market Insights discuss the trend for green foods, including green vegetables such as kale, as well as wheatgrass and seaweed… 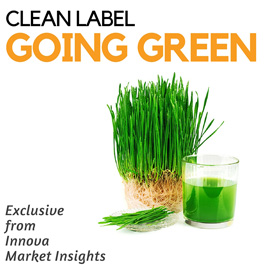 Interest in naturally nutritious ingredients and a return to basics has led to increasing consumption of green foods, including green vegetables such as kale, as well as grasses and seaweed.

Kale is part of the Brassica family of vegetables and is currently rising high in markets such as the US and the UK. While a traditional vegetable of long standing in many parts of the world, including Europe, Africa and China, it declined in popularity as a wider range of alternatives started to appear. More recently, rising interest in healthy eating and winter-time availability have regenerated interest in its use, with its nutritional benefits and attractive colourful appearance attracting a whole new range of consumers.

In line with this, the use of kale in a wide range of packaged food and drinks products has also risen markedly in recent years, with a consistent increase in launch activity recorded by Innova Market Insights. The total number of global introductions rose four-fold over the 2009 to 2014 period, with a further significant double-digit rise in 2015. Activity has been particularly strong in juice drinks and smoothies, as well in as soups, ready meals, and snacks.

Wheatgrass, long available in health food stores and specialist outlets in juice and powder/concentrate format, has also now started to develop a place in the mainstream food and drinks market. It is increasingly being used as an ingredient in supplements and in food and drinks products, often in combination with other components with a healthy image or perceived health benefits. Wheatgrass is the young grass of the wheat plant, Triticum aestivum. It can also be traced back in history for thousands of years and is associated with a raft of health benefits through supplemental nutrition to unique curative properties. Virtually all of these claims remain scientifically unproven, although it is recognised as a good source of potassium, dietary fibre and a range of vitamins and minerals.

According to Innova Market Insights data, global launches of food and drinks products containing wheatgrass saw a double-digit increase in the 12 months to the end of February 2015 and have more than doubled over the past two years. Europe and North America had the highest launch numbers over the past year, with Europe accounting for 55% of the total and North America a further third, led by the UK and the US.

Perhaps more significant, however, is the move away from supplement-type products and into mainstream food and drinks, which accounted for 40% of launches featuring wheatgrass recorded over the past year. Soft drinks products, primarily juice drinks and smoothies, accounted for half of this total, with some activity also evident in snacks, ready meals and dairy beverages.

Supplements featuring wheatgrass have been launched in a range of formats for a wide range of applications, including children’s and men’s supplements, meal replacements and sports and performance lines. Trends in product activity in this sector of the market may also indicate the next developments in this area, with some interest in supplements featuring combinations with other grasses, perhaps most notably barley and oat grasses, as well as a whole host of other green ingredients such as chlorella, spirulina, alfalfa and hemp, as well as more standard green vegetable extracts.