Feeding the growing world population in a sustainable way requires both political and technological solutions. The European Union is at the forefront of the global debate on food security and protection of the natural resources that become scarcer and scarcer. In 2010, the European Union launched the Europe 2020 strategy aiming at driving the European growth in a sustainable way through ambitious targets. The strategy’s objectives related to resource efficiency aims at finding innovative ways to optimise food production and to face the challenge of water availability in Europe and worldwide. The EU funded project INAPRO responds perfectly to these challenges as it is aimed at developing and demonstrating a model-based optimised aquaponic system as a green technology that could play a crucial role in sustainable food production and water saving. 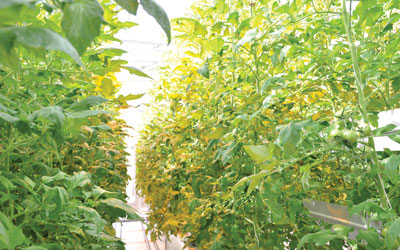 Aquaponics is an environmentally friendly food production technology that couples aquaculture (e.g. production of fish) and horticulture as hydroponics (e.g. production of vegetables) in one system. The nutrientrich water from the fish unit is used as fertiliser for hydroponically grown crops and so reduces the sewage of the fish unit as well. Compared to a single fish or plant production, aquaponics saves water, energy and nutrients. This technology has ancient roots with predecessors like the Asian polycultural farming systems (paddy fields) or the Aztec agricultural islands (chinampas).

Despite the great role that aquaponics could play in producing healthy and sustainable food, the technology did not spread out on the market until now. Indeed, currently existing commercial approaches of aquaponics vary to a large extent in size, complexity and technologies used, often lacking stability, technical and technological standardisation and economic profitability. Classical aquaponic systems couple both units (aquaculture/hydroponics) through a single water recirculating system. The wastewater from the aquaculture which is used to nourish the plants is directly recirculated back into the fish tanks. However, aquaculture and hydroponics have different requests, e.g. concerning pH values, and such systems do not reach the optimum nutrients requirements of plants with higher demands such as tomatoes.

The INAPRO project helps to overcome these limitations by introducing an enhanced technology and by developing standardised modular solutions scalable and demonstrating the viability of large aquaponic sites.

INAPRO uses as innovation a double water recirculation system, one for the aquaculture and one for the horticulture part. The main advantage of such a double recirculation aquaponic system (DRAPS) is that optimum conditions can be set up independently in the aquaculture and in the hydroponic units; this allows the productivity of both sectors to increase without generating adverse interactions between the plants and the fish. Furthermore, INAPRO improves the water reuse system by regaining the evaporated and evapo-transpirated water via cooling traps and reintegrating it into the recirculating aquaculture system (RAS) to reduce the overall water consumption of the system. Indeed, compared to a conventional RAS which requires a daily water input representing 10% of the total amount of water circulating, the INAPRO system cuts this rate to 1-3%.

Science and research are essential in responding to the challenge of feeding the world’s growing population. Producing more food is not the sole answer, it is also necessary to invest in sustainable and resource efficient technologies. The optimisation provided by INAPRO is based on modelling the water, energy and nutrients management of aquaponics. The model-based optimised INAPRO system solution has been integrated with cutting edge technologies such as remote diagnosis and controls technology, an innovative one-way water supply for horticulture and an optimised filter and wastewater system. The resulting INAPRO aquaponic technology allows a nearly emission free production of fish and vegetables with low water and carbon footprint. Moreover, INAPRO minimises the use of fertilisers and pesticides; it does not employ fish drugs and antibiotics and prevents these substances being released into the environment. INAPRO increases food production in a sustainable way, by reducing the pressure on already overexploited fish stocks and without creating negative impacts on the environment linked with intensive marine aquaculture thanks to the DRAPS.

The importance of technologies such as INAPRO has been fully recognised by policymakers. For instance, Michèle Rivasi, a French member of the European Parliament belonging to the group of the Greens has acknowledged the improvements provided by INAPRO and declared that “Aquaponics is like aquaculture. But better! While aquaculture can lead to pollution, contamination and diseases, aquaponics works like the circular economy our society definitely needs. A self-sustainable production providing proteins and vegetables for a healthy diet respecting the environment! What else?”

The latest achievement of the project has been the construction of an INAPRO aquaponic system in Abtshagen (Germany). The facility consists of a greenhouse with separated aquaculture and hydroponics sections equipped for the production of tilapia and tomatoes. The instalment has been built in order to run tests on all the different equipments and to collect data concerning e.g. oxygen values, air and leaf temperature. The results will be used to optimise the concept and to build INAPRO demonstration sites.

The INAPRO system has been conceived to be scalable and adaptable to different sizes and locations. The demonstration phase of the project, starting during the autumn of 2015, will be focused on the construction of greenhouses in Germany, Spain and China. The demonstration sites will show the viability of the INAPRO system in different geographical and climate conditions.

Sophia’s main fields of expertise are research and innovation, energy and education related matters. She worked for two years as Public Affairs Officer at the European Association for Chemical and Molecular Sciences (EuCheMS). Sophia has a BA in Political Sciences from the University of Milan and a MA in International Relations from the University of Brussels.