This article addresses simultaneous HPLC analysis of iso-α-acids, α-acids and humulinones in the brewing process. 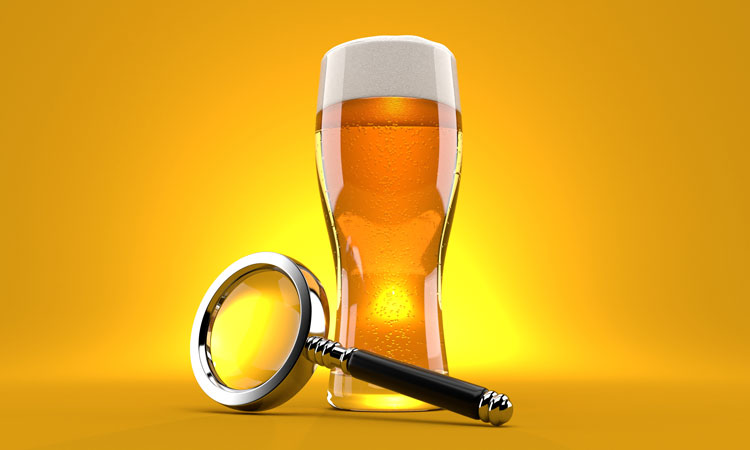 Hops have been dominating the flavour in beer ever since the ‘Reinheitsgebot’, the German beer purity law of 1516, stipulated that hops were one of four allowable ingredients in brewing. Not only do hops help to prevent spoilage in beer, they also counter the sweetness of malted grains with bitterness, thus adding flavour.

Hops contain organic compounds called alpha (α-) and beta (β-) acids. The iso-α-acids are bittering components in beer, which are formed by heating and isomerisation of the α-acids contained in hops in the brewing process. Humulinones are also bittering constituents and are created by peroxidation of α-acids.

International Bitterness Units (IBU) are generally used to measure bitterness values. IBUs are calculated based on the results of solvent extraction of the bittering components in beer and spectrophotometric measurement of absorption at 275nm, which is near the maximum wavelength of iso-α-acids.

Despite being a simple method, overestimation is possible if the sample includes substances that have ultraviolet (UV) absorption at 275nm. A high-performance liquid chromatograph (HPLC) measures the absorption after separation with a column, so each component can be quantified more accurately.

This article introduces a simultaneous analysis of iso-α-acids, α- acids and humulinones in five types of beer using a Shimadzu Nexera XR high-performance liquid chromatograph, with reference to EBC 9.47 (EBC: European Brewery Convention). IBU was also measured with a UV-1900i UV-Vis spectrophotometer and compared with the results of the HPLC. Use of high-speed separation conditions and the multi-data report creation function of LabSolutions are also introduced.

Figure 1 shows the structural formulas of the iso-α-acids, α-acids and humulinones contained in beer, each of which has three homologues/compounds. In addition, iso-α-acids also include cis-trans isomers. The reagents used in the formulation of the standard solution were “DCHA-Iso, ICS-I4,” “International Calibration Extract 4” and “DCHA-Humulinones, ICS-Hum1.” Table 1 outlines the compositions of the respective reagents. 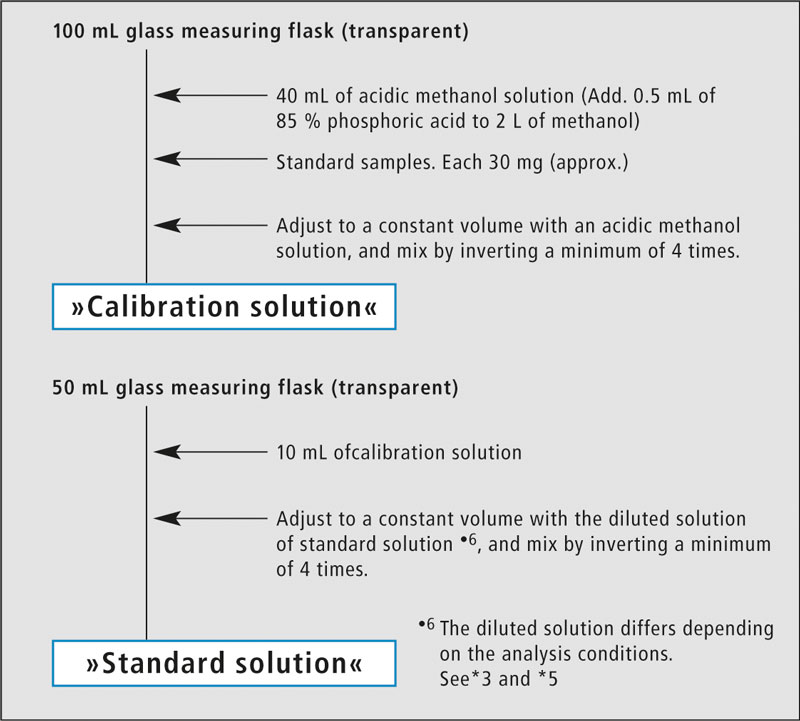 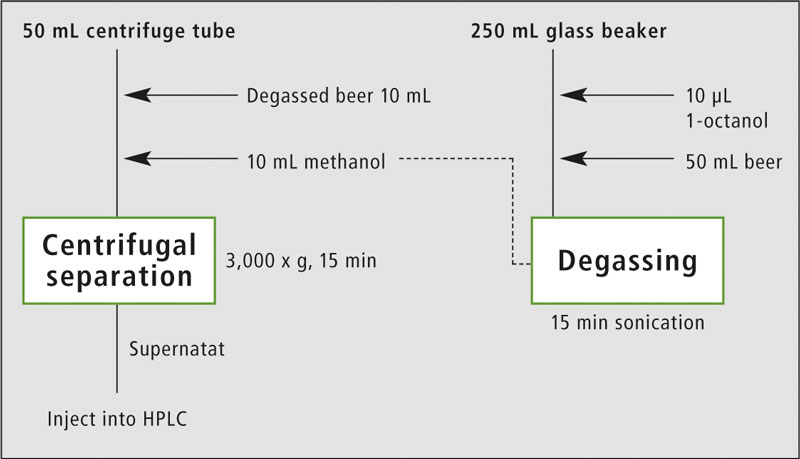 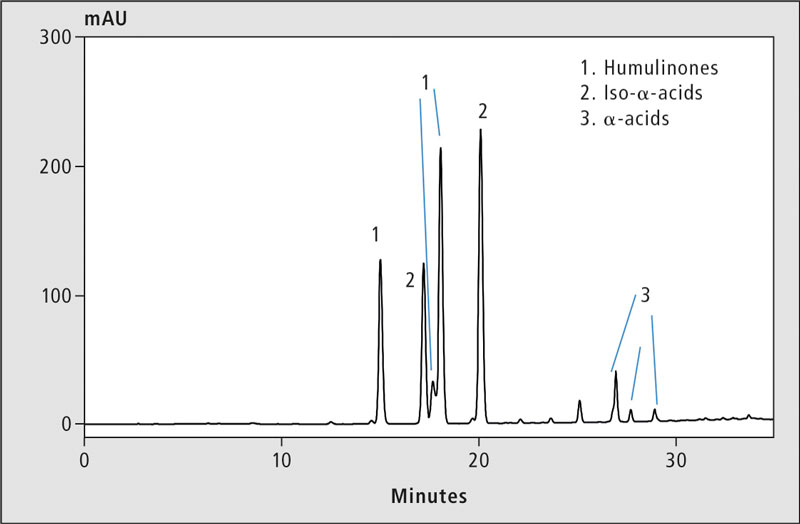 Figure 4a: Chromatogram of standard solution under EBC 9.47-compliant conditions

All reagents were manufactured by the American Society of Brewing Chemists (ASBC) or Labor Veritas. ICS-I4 contains only trans isomers. Because the β-acids (colupulone, lupulone and adlupulone) contained in the standard solution elute after the α-acids, a rinsing process using a solvent with higher elution strength (Mobile Phase B) was added for both analysis conditions. 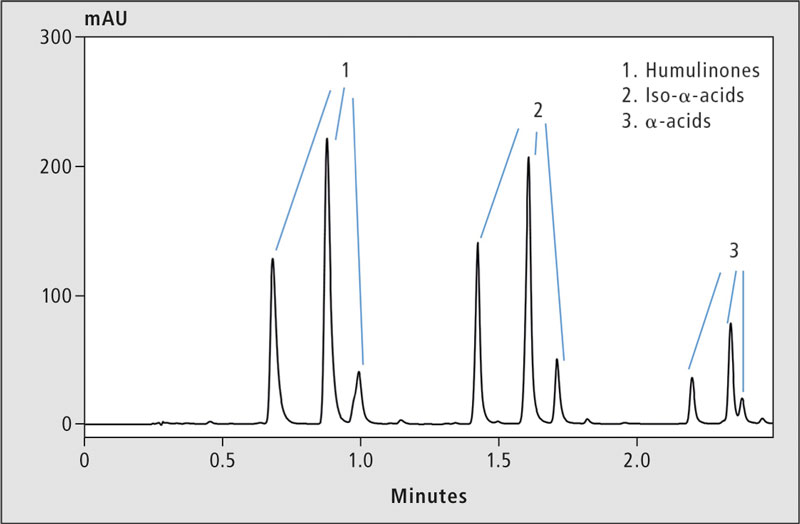 One percent citric acid buffer(pH7.0): 10.9g citric acid monohydrate (analytical grade) is dissolved in about 950mL deionised water. The pH is adjusted to 7.0 with 45 percent KOH (Potassium hydroxide) and deionised water added to make up to 1,000mL. The solution is filtered through a 0.45μm filter. 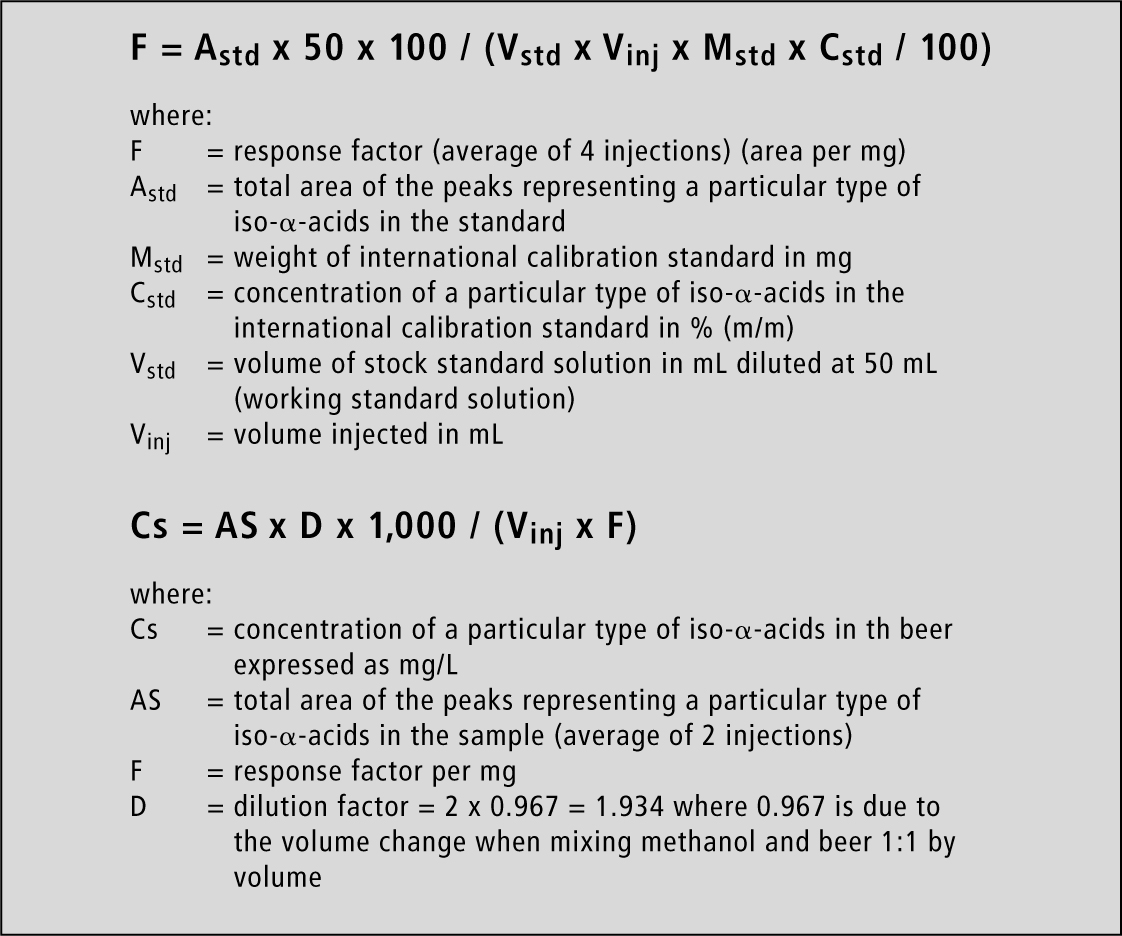 Samples of five commercially available beers were prepared with reference to EBC 9.47. Table 5 shows the details of each sample, and Figure 5 illustrates the sample preparation procedure. Figure 6 presents the calculation method for quantitative values in accordance with EBC 9.47, and Figure 7 displays the chromatograms when each of the samples was measured under the EBC 9.47 conditions and high-speed analysis conditions. 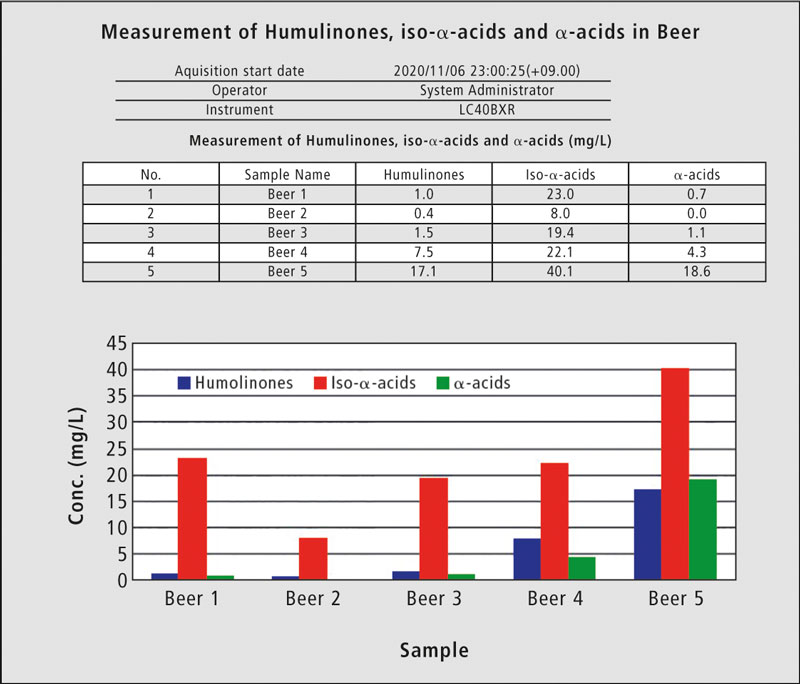 The iso-α-acids, α-acids and humulinones in the beers were quantified in accordance with the formulas shown in Figure 6. Tables 6 and 7 show the results under the respective analysis conditions. Importantly, the same quantitative values were obtained under both conditions.

Furthermore, Table 8 lists the results of measurements of the IBU values with a UV-1900i UV-Vis spectrophotometer in accordance with Methods of the ASBC, Method Beer-23. Details of the IBU measurement conditions are provided in Application News No. A622. 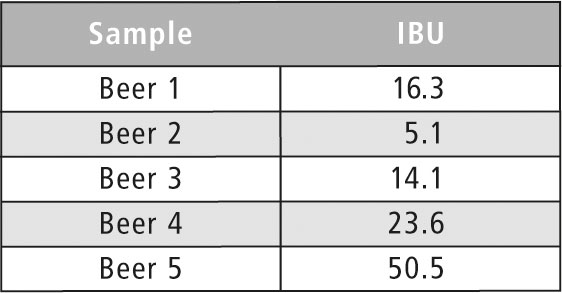 A larger IBU value was detected for Beer V, which is an IPA (Indian Pale Ale). A distinctive feature of IPA beers is a unique bitter taste obtained using a large amount of hops. Because hops are also added to the boiled and cooled wort (mixture of malt extract and water before fermentation), a higher level of α-acids and humulinones compared to other beers is thought to be a factor in the distinctive flavour of IPAs.

The sample preparation shown in Figure 5 was carried out five times by standard addition of the same concentration as the standard solution, and the recovery rate was calculated. Table 9 states the recovery rate, and Table 10 the relative standard deviation of the peak areas of the five spiked samples.

A multi-data report is an optional function of the software package, enabling highly flexible report creation similar to spreadsheet programmes. Reports can be prepared simultaneously upon completion of analysis by linking it with the analysis schedule. This function not only reduces the time required for manual report creation, but also prevents transcription errors.

A template incorporating the calculation formulas for the quantitative analysis shown in Figure 6 was prepared, and a multi-data report was created from the measurement results of the iso-α-acids, α-acids and humulinones in the beers. Because graphs can also be created simultaneously from the quantitative results, the percentage of bittering components can be judged at a glance (Figure 7).

The IBU values were also measured with a UV-1900i UV-Vis spectrophotometer and compared with the results by the HPLC. A high IBU value was obtained for the IPA (Indian Pale Ale). More accurate quantitative analysis is possible by employing HPLC.

Uwe Oppermann
Uwe Oppermann is the responsible manager of the European food market segment in the headquarters of Shimadzu Europa GmbH in Duisburg. He studied Mineralogy with a focus on geochemistry and soil science at the Technical University of Braunschweig. During that time, he experienced working with analytical instrumentation for characterisation and quantification of essential and toxic elements in rocks, minerals and soils. Since 1987, he has been working in the analytical business unit of Shimadzu with a focus on analytical solutions for testing food and beverages, targeting the highest level of food quality and food safety. 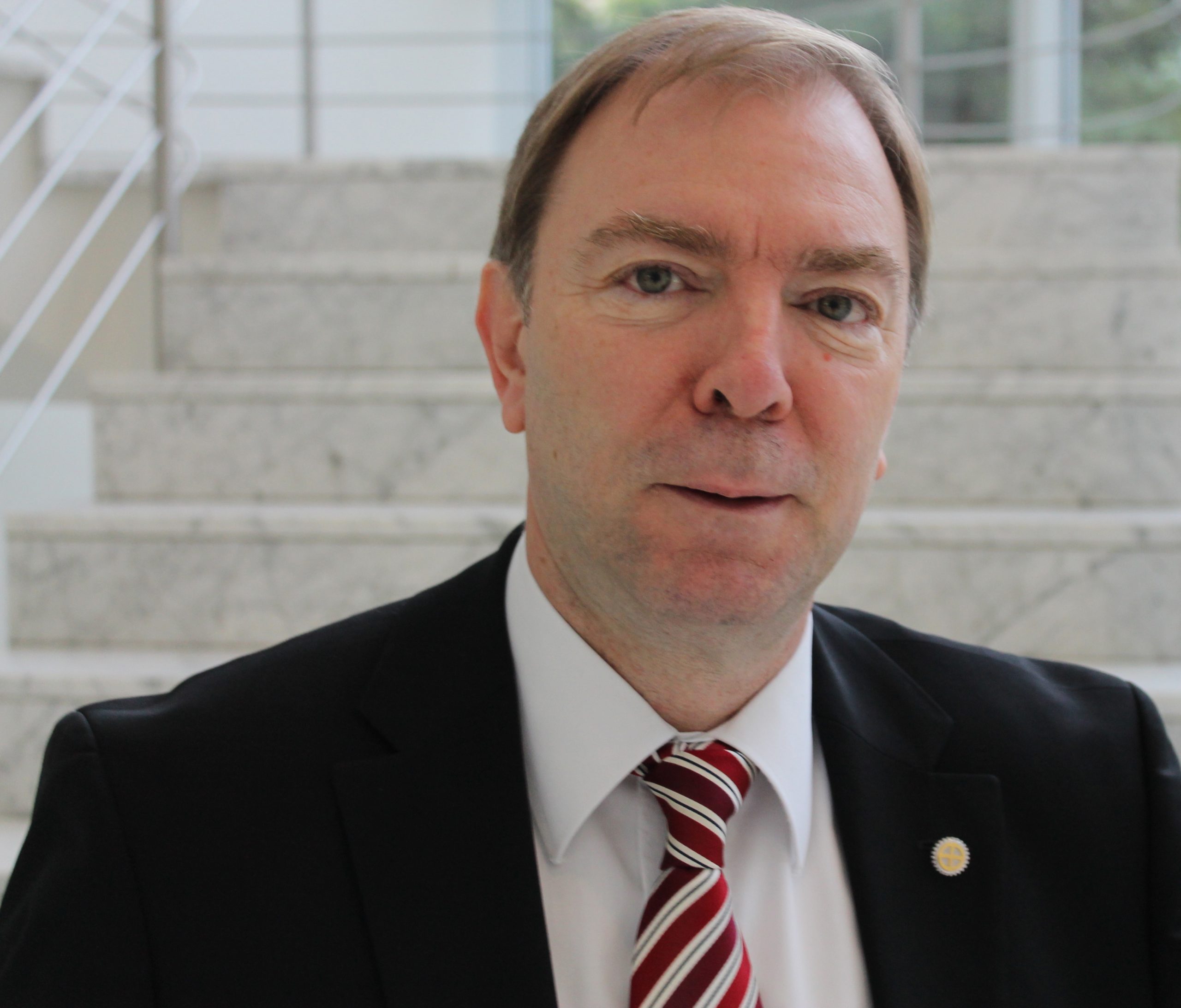