Andrea Paoli, Head of Food Manufacturing, Robotics and Automation at the National Centre for Food Manufacturing, University of Lincoln, explores how a systematic use of automation and robotic systems could facilitate a major advancement in food manufacturing efficiency during times of unsustainable economic pressures. 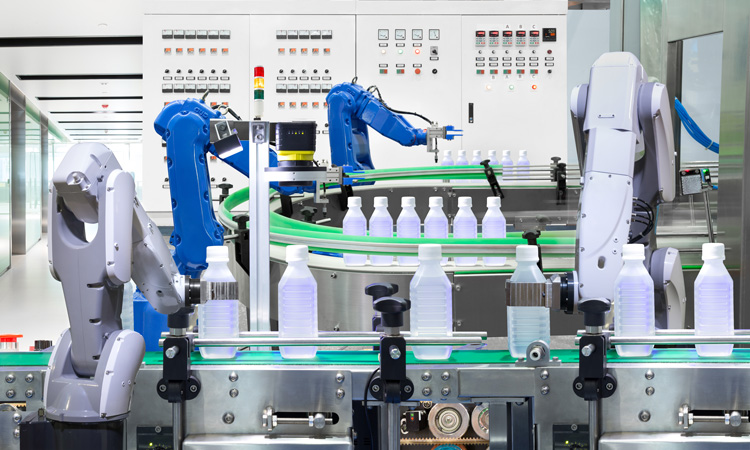 Food and beverage is the largest manufacturing sector of the UK economy contributing over £43.7 billion GVA and employing 450,000 people (BSA). As it stands, the sector currently faces major unsustainable economic pressures, born from the fact that the implementation of the National Living Wage regulation has led to labour becoming more expensive year-on-year. With regard to labour availability, there is an added issue of the demands which a post-Brexit Britain will present.

Factory staff roles are becoming harder to fill as many non-UK nationals are leaving the country due to uncertainties surrounding their future status and the reduction in the value of the GBP since the Brexit referendum. As a matter of fact, up to 50 percent of factory workers are from the EU and the Food and Drink Federation (FDF) now estimate that the UK will need an additional 140,000 minimum wage British Food and Drink workers by 2024 to fill this gap.

To cope with this extremely complex and variable scenario, a significant step change in reducing food processing costs while increasing food quality and security is urgently needed.

Also, utility costs regularly escalate, production costs have risen as a result of the increased costs of EU imported ingredients, and there is limited opportunity to increase product prices due to the retail and food service sectors being so competitive. As a result, there is a growing pressure on food manufacturers to absorb the rising cost of production so that the end product prices are unaffected. Ultimately, in not passing on these costs to their customers, suppliers in the food manufacturing sector are facing ever increasing margin erosion.

In addition, the current COVID-19 outbreak has highlighted another criticality of the sector, as many factories have had to shut down because of workers refusing to work in production lines where they stand less than 50 centimetres apart on 12-hour shifts. Along the same lines, hygiene remains a challenge in food factories; as an example, the sandwich industry still has an average of 50 percent operations made by hand by operators not wearing gloves and between 2008 and 2018 there were an average of 46 deaths per year  from Listeria in industrially manufactured sandwiches and salads (Public Health England).

To cope with this extremely complex and variable scenario, a significant step change in reducing food processing costs while increasing food quality and security is urgently needed. In this context, a systematic use of automation and robotic systems with fully integrated digitised process control would facilitate a major advancement in food manufacturing efficiency, delivering significantly reduced production costs whilst lowering energy requirements and food waste.

Let’s analyse the situation starting from the application of robotics in food manufacturing. The UK is not traditionally a large market for industrial robots only ranking 22nd worldwide with a density of 85 units per 10,000 employees (See Figure 1). As a matter of fact, the installations of industrial robots in the United Kingdom fell by three percent in 2018, against a general average increase of 12 percent in the EU. Among these installations, only a very limited share of less than four percent is food related (See Figure 2).

In fact, whilst there are already some robot applications in the food industry, most are located at the later stages of packaging and end-of-line product casing and palletisation. Therefore, there remains untapped potential in primary and secondary processing stages of food manufacturing – where primary processing includes operations on raw food (i.e., cleaning, sorting, inspecting, measuring, preparing and transporting) and secondary processing includes the operations needed to combine ingredients and produce food products, (i.e., blending, cooking, chilling and assembling).

The use of novel ground-breaking technologies such as sensor networks, Internet of Things and blockchains will have a massive and disruptive effect on food production.

The fact that packaging processes tend to be some of the most generic tasks within the food manufacturing sector explains why automated robotic technologies have to date been applied primarily to these processes. Conversely, primary and secondary processing are typically more complex and varied operations, which poses a number of new development challenges. The good news is that the cost of robotic technology is rapidly decreasing; ARK Investment Management, a researcher in this market, says that industrial robot costs are expected to drop a solid 65 percent by 2025 (See Figure 3). Also, the availability on the market of affordable and reliable collaborative robotic systems enable the possibility of designing infinitely flexible applications where robot arms can be safely located and re-located between different manual operators on the same or different productions line without the need to stop and re-engineer the production.  However, there is still a paramount need to develop a new generation of ‘food-ready’ robots – that is, industrial robots that can be used across all the phases of food processing – which have specific advance features such as self-cleaning and hygiene enforcement. 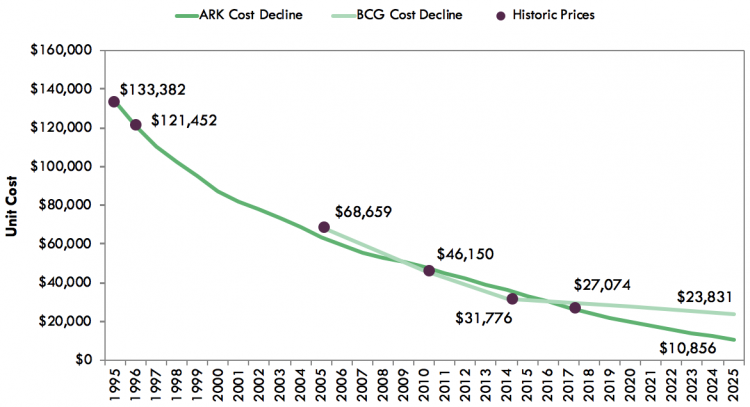 Moving on to discuss the application of advanced modern automation systems in food manufacturing, the focus is on “Industry 4.0”, i.e., the digitisation of manufacturing. In this regard, the digital revolution for the food sector rests in the possibility of collecting and utilising a deluge of production data and analytics. The use of novel ground-breaking technologies such as sensor networks (allowing a distribute monitoring of the process), Internet of Things (that allows smart communication and data sharing among different parts of the plant) and blockchains (that allows to securely store the data onto the cloud) will have a massive and disruptive effect on food production. Data can be used to monitor the production and account for the desired food consistency and quality.

There remains untapped potential in primary and secondary processing stages of food manufacturing.

In addition, they can be also used to monitor the processing machines and implement AI driven prognostic algorithms to drive preventive maintenance strategies, thus significantly increasing the plant dependability while reducing maintenance costs. Finally, extending this “big data” approach to the whole food supply chain (from farm to fork), would improve production efficiency and security and enable a new level of traceability (see Figure 4). In short, one of the most important lessons of the fourth industrial revolution – the digital one – is that data is not a by-product, it is real added value and should be considered as the automation unique selling point. 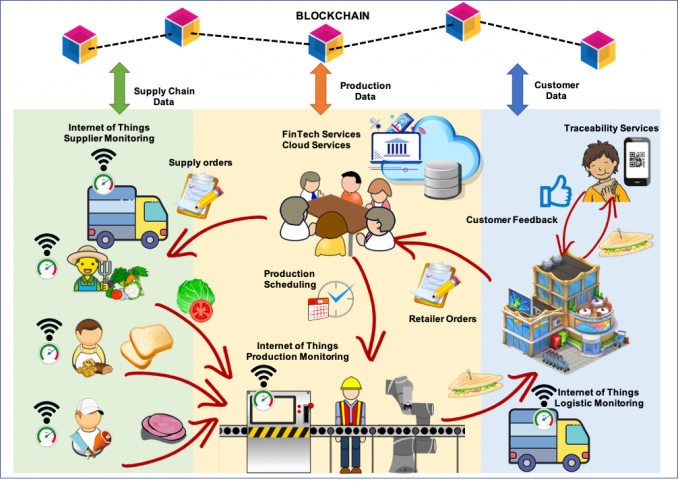 Figure 4 – A conceptual Industry 4.0 architecture in Food Manufacturing. Data are collected at all stages of the supply chain and safely stored and accessed thanks to Internet of Things and blockchain applications.

Undoubtedly, applying new automation and robotics technologies to food production lines means an initial increase in costs and, as already mentioned, the possibility of allocating additional costs to the final product is not acceptable in such a competitive market as the food and beverage one. However, if there is a price rise from new tech adoption, the added efficiencies realised by the industry 4.0 model will rapidly counter this, thus significantly improving the ROI by reducing the break-even point.

Data can be used to monitor the production and account for the desired food consistency and quality.

The key question at this point is the following: “how can companies with limited capex embark on this journey?” This is the case of many SMEs which in the UK food and beverage sector account for 97 percent of businesses, 28 percent of employment and 19 percent of turnover (UK gov). To cope with this problem, new business models to overcome traditional blocks to SME investment in technology are rapidly spreading across technology providers and systems integrators. These are based on the deployment of productivity-enhancing tech systems on a rental basis with full integration and maintenance support.

In addition, a considerable number of innovation and technology transfer programmes – publicly funded both at national and EU levels – can support the food manufacturing SMEs in the adoption of these new technologies. This is the case, as an example, of the EU funded COTEMACO programme, a collaboration between innovation centres and manufacturing SMEs in north-west Europe aimed at maintaining their cost competitiveness against large-scale production facilities in low-wage economies.

Clearly, this food manufacturing revolution is just at the beginning and there is still plenty of work to do, but this is a challenge that we all have to take on through a strong, cross-fertilising synergy between end-users, technology providers and innovators. The appointment is set for the year 2030, when the global population to be fed is predicted to be of 8.5 billion people.

Andrea Paoli is an innovation and technology senior manager with over 15 years’ experience in the automation and robotics sector. He is also a scholar in UK Higher Education with proven track record of designing, managing and delivering industrial R&D and technology transfer projects. He works for the National Centre for Food Manufacturing (University of Lincoln) where he leads food manufacturing robotics and automation R&D activities. In his role, he manages a team of engineers, scientists and technicians and a broad portfolio of innovation and technology transfer projects aimed at advancing the food manufacturing supply chain through a systematic adoption of ground-breaking robotics and automation technologies. 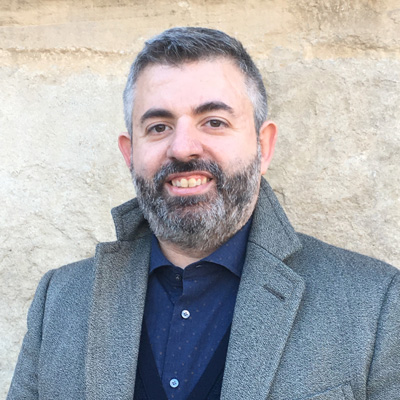