Food Fraud 2018: “We can no longer rely on reactive measures”

Professor Samuel Godefroy warned that regulatory authorities must move on from simply responding when there is a crisis created by food fraud and take a more preventative approach. 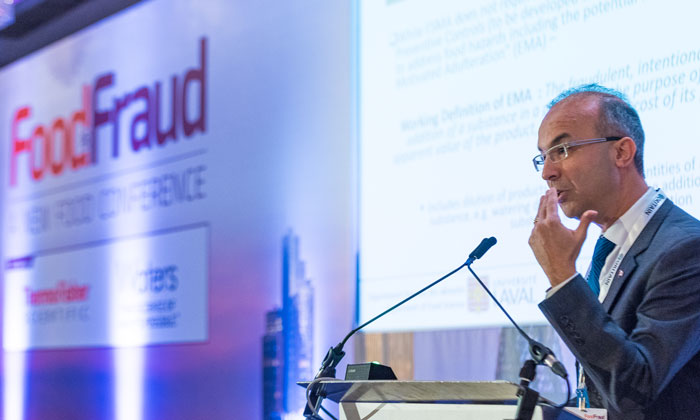 BEFORE IT'S TOO LATE: Risk assessments can convince regulators that it is worth acting

The first speaker at New Food’s Food Fraud 2018 conference, Professor Samuel Godefroy has put forward an argument for a risk-based approach to food fraud that would spur regulators into action.

The Full Professor of Food Risk Analysis & Regulatory Systems at Universite Laval, Quebec, gave delegates a potted history of food regulation, with prevention of food fraud present at its very inception. But in spite of this, authorities today are occasionally guilty of treating food fraud as low-priority.

“In order to interest a regulator we need to present something that is based on risk,” he said. “This could be a way to drive changes in this direction.”

To illustrate his point, Prof Godefroy drew up a scale of risk, attempting to define where food fraud became an issue and trying to gauge the reaction of regulators based on that risk. In issues where the fraud incident affected the composition of the food, through substitution or other adulteration, the risk was deemed higher, as the threat potentially had repercussions for food safety. In such incidents, he said, “action will be warranted”.

On the other end of the scale, there were incidents that only affected the representation of the product in question. This included mislabelling fish or falsifying weights.

In between fell risks to vulnerable groups, such as those with allergies and children, and nutritional safety issues posed by consumers not getting what they think they are getting.

He said: “For the higher risk area, we can no longer be relying on reactive measure. Preventative measures will be needed in this case.

“Measures in the form of mandatory requirements of identification of vulnerabilities and addressing vulnerabilities could be envisaged in this area. Reactive approaches could still be maintained in this area through general provisions, but they could be enhanced in order to have higher protection for situations where you have vulnerable groups and their health may potentially be at risk.”

He added that an effective food regulatory system was one that looks at prevention and for prevention to work, it must be based on risk.