One of the world’s most expensive ingredients has been successfully harvested in the UK, Cambridge University scientists have confirmed. 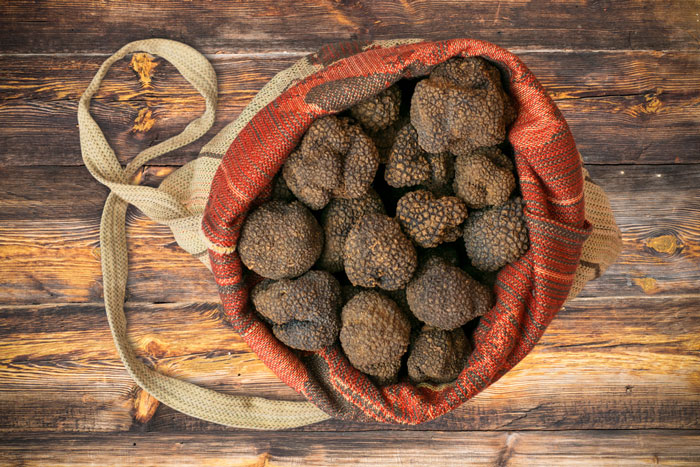 BLACK GOLD: The Périgord black truffle is one of the priciest ingredients on the planet.

The Périgord black truffle, a delicacy which sells at £1,700 per kilogram, has been dug up by a truffle-hunting dog in Monmouthshire, South Wales – the furthest north it has ever been known to grow.

The aromatic fungus was found within the root system of a Mediterranean oak tree after a nine-year project and excavated in March.

Researchers from the University of Cambridge and Mycorrhizal Systems Ltd (MSL) confirmed yesterday (November 6) that the trained dog had unearthed a Périgord black truffle after conducting microscopic and genetic analysis.

It is now hoped that the success of this project may lead to further cultivation in other parts of the UK.

Black truffles are prized for their intense flavour and aroma, but they are difficult and time-consuming to grow and harvest, and are normally confined to regions with a Mediterranean climate. In addition, their Mediterranean habitat has been affected by drought due to long-term climate change, and yields are falling while the global demand continues to rise. The truffle industry is projected to be worth £4.5 billion annually in the next 10-20 years.

Black truffles grow below ground in a symbiotic relationship with the root system of trees in soils with high limestone content. They are found mostly in northern Spain, southern France and northern Italy, where they are sniffed out by trained dogs or pigs. While they can form naturally, many truffles are cultivated by inoculating oak or hazelnut seedlings with spores and planting them in chalky soils. Even through cultivation, there is no guarantee that truffles will grow.

“It’s a risky investment for farmers – even though humans have been eating truffles for centuries, we know remarkably little about how they grow and how they interact with their host trees,” said Professor Ulf Büntgen of Cambridge’s Department of Geography, the co-author of a paper describing the project.

“Since the system is underground, we can’t see how truffles are affected by different environmental conditions, or even when the best time to water them is. There’s been no science behind it until now, so progress is slow.”

In partnership with local farmers, Büntgen’s co-author Dr Paul Thomas from MSL and the University of Stirling has been cultivating truffles in the UK for the past decade. In 2015, MSL successfully cultivated a UK native Burgundy truffle, but this is the first time the more valuable black Périgord truffle has been cultivated in such a northern and maritime climate. Its host tree is a Mediterranean oak that was planted in 2008. Before planting, the tree was inoculated with truffle spores, and the surrounding soil was made less acidic by treating it with lime.

“This is one of the best-flavoured truffle species in the world and the potential for industry is huge,” said Thomas. “We planted the trees just to monitor their survival, but we never thought this Mediterranean species could actually grow in the UK – it’s an incredibly exciting development.”

The researchers have attributed the fact that black truffles are able to grow so far outside their native Mediterranean habitat to climate change. “Different species respond to climate change on different scales and at different rates, and you often get an ecological mismatch,” said Büntgen. “For instance, insects can move quickly, while the vegetation they depend on may not. It’s possible that truffles are one of these fast-shifting species.”

“This cultivation has shown that the climatic tolerance of truffles is much broader than previously thought, but it’s likely that it’s only possible because of climate change, and some areas of the UK – including the area around Cambridge – are now suitable for the cultivation of this species,” said Thomas. “While truffles are a very valuable crop, together with their host trees, they are also a beneficial component for conservation and biodiversity.”

The first harvested truffle, which weighed 16 grams, has been preserved for posterity, but in future, the truffles will be distributed to restaurants in the UK.