The importance of effective, correct lubrication of high-temperature environments in the food industry… 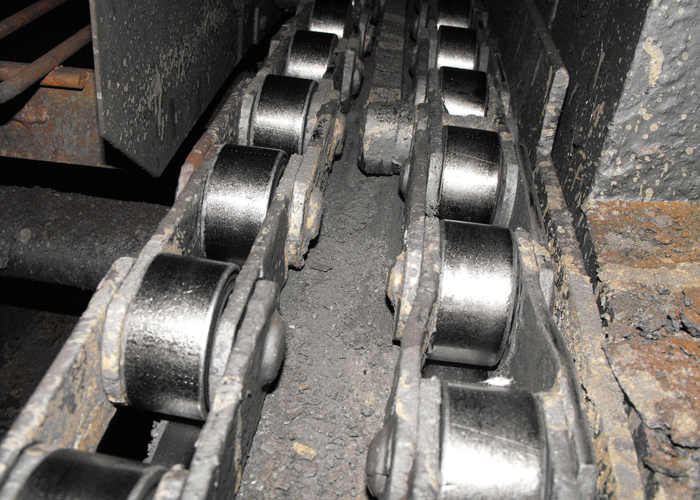 Oven chains operating at high temperatures can be lubricated in two different ways: with a liquid lubricant, or with a solid lubricant suspended in a carrier fluid. Whether solid or liquid, the lubricating film physically separates contacting metal surfaces, thereby reducing friction and wear.

Fluid film lubrication is the regular oil film lubrication used in most ambient temperature applications. This type of lubrication can also be used at higher temperatures, provided that you take into account the decreased viscosity of the fluid (thinner oil film), the increased oxidation rate of the oil (can leave varnish and sludge), and the volatility of the oil (as it evaporates, there is less oil with which to lubricate).

At higher operating temperatures, frequent lubrication is required to replace the fluid lost to evaporation. The evaporation, oxidation and decrease in viscosity make proper lubrication difficult to achieve with a liquid lubricant alone. In such cases, using a solid lubricant provides better wear protection and consumes less lubricant.

Solid film lubrication is used at high temperatures or in applications where it is impossible or undesirable to use a liquid. The solid is usually suspended in a liquid carrier designed to disperse (evaporate) after the lubricant has been applied and in the case of chains, after it has penetrated in to the pin area of the chain. The example that most people are familiar with is graphite powder dissolved in kerosene, but technology has advanced well beyond this.

The choice of the specific type of solid lubricant technology has an enormous impact on performance and should not be taken lightly. Materials commonly used as solid lubricants include molybdenum disulfide (MoS2, also known as moly), graphite (C), fluorocarbon polymers such as polytetrafluoroethylene (PTFE, commercially known as Teflon®), metallic oxides, and a highly refined powder of aluminum, magnesium and silicate (Al-Mg-Si, commercially known as Almasol®). Table 1 shows a comparison of these technologies.

On a microscopic level, all metal surfaces are uneven and have high and low spots. The high points, called asperities, on opposing working surfaces meet under heavily loaded conditions and the instantaneous contact temperatures of these asperities often exceed 500°C. Pressures in the contact zone can also exceed 175,000 psi.1 Only the Al-Mg-Si technology meets these needs and remains inert and intact under these extremes of temperature and load.

Neither graphite nor PTFE has sufficient load-carrying capacities, and moly becomes abrasive, which causes wear. Consequently, NASA has used the Al-Mg-Si solid film technology on every manned U.S. space flight including the lunar landings and the space shuttle.6,7

The size and the morphology of the particles of the Al-Mg-Si powder are carefully controlled. These particles are platelets, which form a single-layer coating on the surface of the metal through particulate attraction. These particles carry the load when the hydrodynamic oil film is gone (squeezed out or evaporated off), preventing metal-to-metal contact. 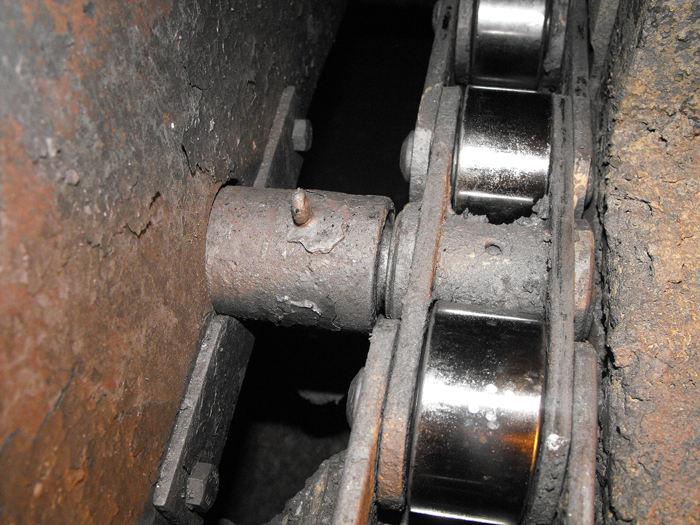 The reduction in friction translates into less wear, cooler operating temperatures and smaller electricity bills. The energy savings alone typically pay for the lubricant several times over. The most noticeable differences are the elimination of squealing and screaming of the chains. Another benefit is that the Al-Mg-Si powder does not build up on itself or make a mess like some other solid lubricants do.

Different carriers allow the solid lubricant to be applied at different temperatures. For room-temperature application, light carriers such as kerosene are used. But if the chains are hot, the low flash point of these fluids is a fire hazard, so a variety of synthetic carriers are employed.

The best ones are smokeless and odorless. Unlike lubricants that rely on the fluid to provide the lubrication film, the evaporation rate of these products should be high rather than low because the oil is only a carrier to take the solids to where they are needed – inside the pin and bushing area.

The light carrier ensures proper penetration into the links of the chain at cool temperatures. During extended production runs, a smokeless, odorless, high flash point chain lubricant is applied to the hot chain as required. Because the chain is hot, this heavier carrier rapidly thins out and penetrates into the pin area of the chain. 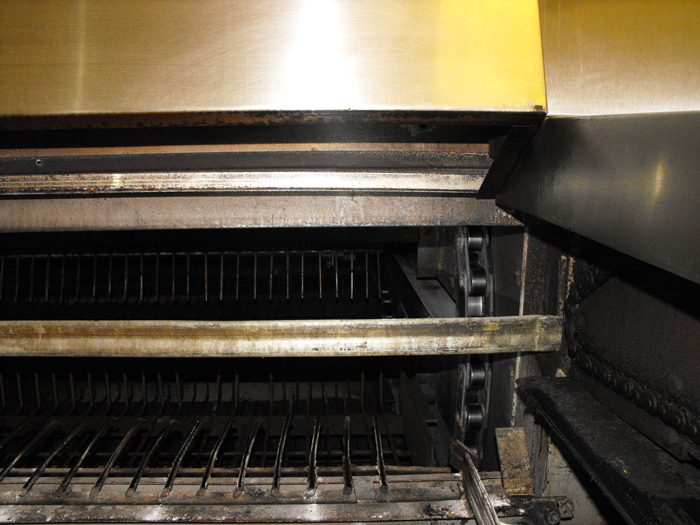 When using lubricants containing suspended solids, it is important to agitate them before application. Many plants apply them to oven chains by hand using a garden hand sprayer (the type you pump, shake and spray) and apply them only once every week or two. There are also automatic lubrication systems, which circulate or agitate the fluid (to keep the solids in suspension) and then spray the fluid to the appropriate points on the chain.

When switching over from a liquid film lubricant or when lubricating a new chain, the chain needs to be impregnated with the solid lubricant, initially requiring frequent application. Once the solids are in the chain, additional lubricant is required only to replenish the lost solids, and the amount of lubricant can be reduced significantly.

The frequency and amount of lubricant required depends on the temperature and other aspects of the operation, but in general, you should start lubricating every other day and extend lubrication intervals from there. Because most bakeries apply lubricant on the weekends when the chains are cold, they typically apply a solid lubricant in a light carrier once a week, then extend this to once every two or three weeks. If you use a drip system you will have to apply the lubricant more frequently because it applies less lubricant at a time.

Another way of optimizing the lubrication frequency and amount is to measure the amperage required to drive the chain. As the lubricant gets depleted, the friction increases, using more electricity. This provides a useful feedback loop indicating that more lubricant is required. This is also a great way to evaluate chain lubricants, because the better they work, the lower the amperage draw will be.

The Rold Gold Foods division of Frito-Lay Inc. in Canton, Ohio produces a variety of pretzels. One of its ovens has a chain drive kiln screen used in the baking process. The commercial-grade lubricant in use was black and messy.

If this lubricant was not applied on a regular weekly basis, the chains would bind up, which in turn tripped the main power for the oven and shut down production. This problem occurred six to eight times a year. Temperatures of the oven where the chains pass through are 246°C (475°F), with pretzel dust and salt present.

Since switching from the commercial lubricant to Al-Mg-Si, Rold Gold has never had a power failure due to buildup of solids or lack of lubrication. The company uses less lubricant than with the previously used chain lubricant, and they appreciate the improved cleanliness of the chains.

Bimbo de Argentina, a large bakery in Argentina, operates Stewart ovens with skate wheel chains operating at above 200°C (392°F). The chains are lubricated with a centralized system. By changing the type of chain lubricant, personnel eliminated buildup on the chains, recorded significant amperage drops and reduced the amount of lubricant applied. The starting amperage dropped from four amperes (amps) to two amps, and the operating amperage dropped from between 0.70 and 0.90 amp to between 0.50 and 0.80 amp.

Bluebird Baking Company is located in Detroit, Mich. It produces a variety of baked goods including hotdog and hamburger buns using Wilco tunnel ovens. The company was experiencing heavy carbon deposits on its chains and even on some of its baked goods. In 1989, the bakery decided to try an oven chain lubricant containing the Al-Mg-Si technology.

The change in lubricant resulted in a 26 percent reduction in power consumption from 4.60 amps to 3.40 amps. This 1.2-amp reduction amounts to more than $288 per year in energy saving on just one Wilco oven. The new lubricant also cleaned up the deposits from the chains.

Plants in both New Zealand & the Netherlands belonging to the Quality Baker group were experiencing expensive downtime due to chain lubrication problems. The messy solids containing oil that they were previously using was carbonizing and this was causing problems such as chain shudder, squeaking and the chains jumping off sprockets. After converting to Al-Mg-Si oven chain lubricant, improvements experienced included the removal of carbon, no rusting or shudder and in the Netherlands there was a 30 percent reduction in amperage draw (from 18.3 amps to 12.7 amps) – resulting in excellent energy savings for the bakery.

Significant operational efficiencies can be achieved by selecting chain lubricants and application methods that match the specific operating environment and failure mode of the chain.

As illustrated by several case studies, an application-specific chain lubricant designed to combat the enemy (water, dust, heat, etc.) saves a considerable amount of money in downtime, cleaning, lubrication, repairs, replacement chain and even electricity. Consider the factors that shorten your chain life and what you are going to do to prevent them.