How to make the fish farming industry more climate friendly

How might we approach the issue and reduce the carbon footprint of fish farms. 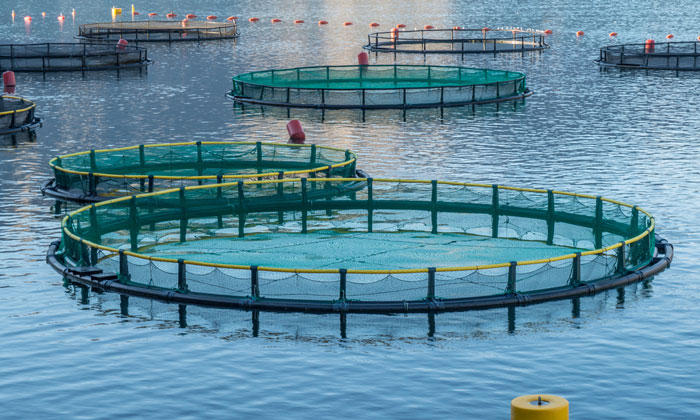 When Master’s student Helleik L. Syse started looking into the energy consumption of the Teistholmen fish farm outside of Stavanger, he soon found that the industry was much more energy intensive than expected.

“What requires a lot of energy is the actual feeding process, where several tonnes of pellets are transported through hoses using compressed air out to the sea cages”, explains Syse.

Today, about half of the fish farms along the Norwegian coast rely on diesel generators to produce the electricity needed. The other half is connected to the electricity grid, via a sea cable.

The aquaculture industry is growing rapidly. Larger farms further out to sea is the trend.

“In the future, farms will be located far out to sea. They will consume more energy, and connecting them to the onshore electricity grid will be challenging. The industry will also face stricter CO2 emission standards, says Associate Professor Siri Kalvig at the University of Stavanger.

“One possibility is for the aquaculture industry to use renewable energy solutions for off-grid systems, i.e. self-sufficient energy systems such as a fish farm at sea”, she continues.

Kalvig is head of the Research Network for Sustainable Energy at UiS and IRIS, and she is a part owner of Gwind. This company was established based on research done at UiS, and it explores the possibilities for hybrid renewable solutions at lighthouses and fish farms along the Norwegian coast.

He therefore had to visit an actual farm and find out for himself.

In June 2016, Helleik L. Syse was challenged to study how fish farms might benefit from renewable energy solutions. The answers he found are good news for the offshore wind energy industry.

Using data from the fish farm and cost information provided by the CEO of Gwind, Syse applied energy simulation tools for his analysis.

“The advantage of using such a tool is that you can test millions of combinations to find the optimal energy system for each individual farm”, says Syse.

His Master’s thesis presents three different ways of supplying a fish farm with electricity: a pure diesel system, a hybrid energy system and a 100 per cent renewable energy system.

Syse found that the diesel systems currently in use give high costs and considerable emissions.

A typical fish farm has CO2 emissions of around 120,000 kg per year, in addition to emissions of other gases and soot particles.

100 per cent renewable energy is not profitable

Syse first looked at the possibility of supplying a fish farm with 100 per cent renewable energy. Several potential energy sources were evaluated, including wave power, tidal power, wind and solar.

He found that combining wind turbines, photovolatic panels (PV panels) and batteries was the most efficient solution in the current market.

“To make a fish farm with a 100 per cent renewable energy system work, it requires an overcapacity of wind turbines, PV panels and batteries to secure continuous operation. Only then will the system be able to cope with periods of little wind and sun light”, says Syse.

“This leads to very high costs if they want to get rid of the diesel generator altogether. It is therefore not profitable in the current market”, he concludes.

The system that provided electricity at the lowest cost was a hybrid energy system that combined solar, wind and battery power with a diesel generator for backup.

“Renewable energy such as solar and wind depends on the wind and weather conditions. A fish farm requires constant power supply. If we use renewable energy and keep the diesel generators for backup, there is no need for an overcapacity of wind turbines and PV panels. It has a lower cost, and we also achieve a considerable reduction of CO2 emissions”, Syse concludes.

The Master’s student has estimated that by using wind turbines and PV panels in addition to a diesel generator for handling the energy peaks, farms can reduce their CO2 emissions by almost 50 per cent, and a typical fish farm will at the same time be able to cut costs by 16 per cent.

“By switching to sustainably produced biodiesel or biogas to power the generator, the fish farm could cut fossil fuels all together”, says Syse, who’s supervisors for the Master’s thesis were Siri Kalvig at UiS and Paul Tuohy at the University of Strathclyde.

Profitable market for wind in Norway

Today, the former Bachelor’s student in petroleum engineering at UiS works at Gwind as a project engineer.

“What is most important for me, UiS and Gwind is that this solution could be economically viable in today’s market and not sometime in the future. We can cut emissions considerably without any extra costs. Bearing in mind the current market, hybrid systems seem to be a very good solution for ousting diesel”, says Syse.

Kalvig is enthused by the findings.

“Here we have identified a potential profitable market for offshore wind in Norway. This is just what the industry needs.

“We need a market in Norway for developing new technology, and the fish farming industry might become a promising market for such a development of wind energy”, concludes Kalvig.

By University of Stavanger