Salmon with side effects: The problem with Chile’s rivers 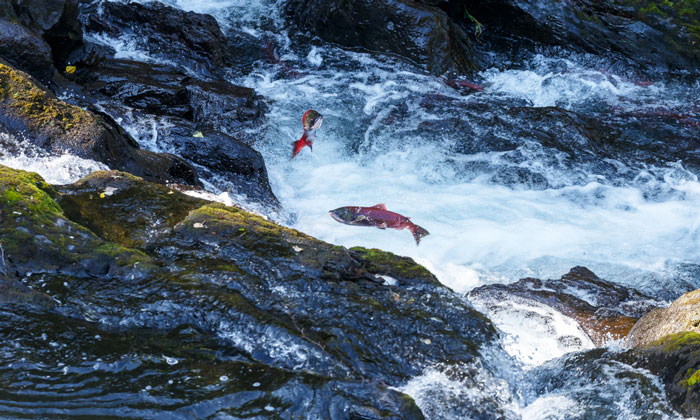 Aquacultures are polluting Chile’s rivers with a cocktail of dissolved organic substances. Tasty, versatile, and rich in essential omega-3 fatty acids: salmon is one of the most popular edible fish of all. Shops sell fish caught in the wild, but their main produce is salmon from breeding farms which can pollute rivers, lakes and oceans. Just how big is the problem? German and Chilean scientists are working to answer this question under the leadership of the Helmholtz Centre for Environmental Research (UFZ).

They examined the dissolved organic compounds which enter Chile’s rivers from salmon farms, and have published a report in the journal Scientific Reports, warning that these substances are placing huge strain on ecosystems and are changing entire biological communities.

Salmon lead a fairly varied life. The adult fish live in the sea but swim upstream into rivers to reproduce and lay their eggs in gravel beds in the upper reaches. This is where the young hatch, grow for a while in the clean, oxygen-rich water, and then set off towards the sea. To breed the popular edible fish, farmers have to provide different living conditions depending on the age of the fish.

Chilean fish farmers base their approach on the natural life cycle of the salmon. In the clear rivers which flow from the central ridge of the Andes towards the Pacific, they have installed a few hundred hatcheries for the eggs and the youngest animals. Slightly larger salmon live in cages in the lakes of the South American country, and the adults then move into similar accommodation anchored in the sea just off the coast. In 2012, Chile’s aquacultures used this method to produce some 820,000 tonnes of salmon with a total value of just under five billion US dollars. For years, the country has been ranked second behind Norway in the list of key salmon producers worldwide.

However, this has not been without an impact on the environment. The cages for the medium and larger fish leak excrement, food residue and other substances into the country’s seas and coastal waters. The companies also draw water for their hatcheries from some of the extremely clean, natural rivers. They pump it through the tanks for the young salmon before reintroducing it to the river further downstream – where it is certainly not in good condition.

Rather than clear water, it is more like a fishy broth which flows downstream from this kind of facility – which is a burden for residents, tourists and aquatic organisms. “Completely turbid water is no longer allowed to re-enter the river,” reports Dr Norbert Kamjunke, a biologist at UFZ. The number of particles contained in the water must be below certain limit values. The aquacultures are now using sedimentation tanks and rotary filters to clarify their waste water. However, there are no such regulations for dissolved substances which simply flow into the water as before without any treatment or monitoring. And in huge quantities.

In an earlier study, Norbert Kamjunke and his colleagues discovered that, in facilities of this kind, around 40 tonnes of dissolved organic substances end up in the rivers for every 50 tonnes of farmed salmon. These substances, which chemists group together as Dissolved Organic Matter (DOM), include the liquid excretions from the salmon, and dissolved residues of food and excrement. “It also contains disinfectants and antibiotics,” he explains. But what compounds does this cocktail contain exactly? And what impact does it have on the water? Researchers have recently investigated this in detail for the first time.

To do so, they used state-of-the-art methods of chemical analysis. Using fluorescence measurements, high-resolution mass spectrometry, and nuclear magnetic resonance spectroscopy, the researchers studied the waste water from four Chilean aquacultures and samples taken from sections of the river both upstream and downstream of the farms. They worked with colleagues from the Universidad Austral de Chile in Valdivia to take samples, with the subsequent measurements carried out at the Helmholtz Centre in Munich. “We were able to determine exactly what DOM molecules were present in the water and in what concentration,” explains Norbert Kamjunke.

The investigation showed that each of the rivers naturally has a slightly different chemical fingerprint. If it flows through heavily forested areas, the water will contain a large amount of humic matter. By contrast, water in volcanic regions tends to have a high proportion of sulphur compounds. However, there are also similarities. Natural sections of river generally contain less dissolved organic material. And this limited load consists of compounds which are difficult for bacteria to break down. “Those areas are predominantly low in nutrients,” summarises Norbert Kamjunke.

However, the picture changes when waste water from aquaculture is introduced. These facilities release large quantities of readily biodegradable compounds. In particular, much higher concentrations of carbohydrates, proteins and their building blocks, and lipids are present downstream of the facilities. The aquacultures therefore provide the low-nutrient rivers with a kind of fertilizer boost.

But what does this entail for the water and its inhabitants? The researchers also investigated this issue in their study. They used laser scanning microscopes to examine the slippery film that grows on stones on the river bed. Upstream of the aquacultures, these biofilms contained a large amount of microscopic algae. These organisms were much less abundant downstream, where there were many more bacteria. “But this changes the entire ecosystem,” explains Norbert Kamjunke.

The algae on the bottom of the natural waters play a key role for several reasons. Firstly they produce oxygen, and secondly they provide food for countless minute grazing organisms. Gastropods, mayfly and stone fly larvae all graze this film. And they in turn are eaten by fish. “The basis of the entire food web would disappear if this algae didn’t exist,” explains Norbert Kamjunke. But this is not the only way in which the waste water from the aquacultures alters living conditions in the river. The bacteria downstream of the facilities use up a large amount of oxygen to break down the dissolved organic matter. Excessively low oxygen concentrations can spell the end of many species which have adapted to life in clean flowing water.

However, the high level of bacterial activity that the team measured downstream of the salmon hatcheries also cleans the water. “Nevertheless, rivers should not be misused as natural sewage treatment plants,” emphasises Norbert Kamjunke. For one thing, clean and unpolluted waters and their inhabitants deserve special protection. For another thing, the water downstream of the facilities has to flow quite a distance downstream until it is clean again.

The length of this stretch depends on the external circumstances. The miniature water purifiers work most effectively at high temperatures and low flow rates. An earlier study by researchers from Magdeburg showed that the bacteria had broken down the pollution around 2.7 kilometres downstream of the facility. “In winter, however, they need a much longer section of river,” says Norbert Kamjunke. And this is not always available to them in the short rivers of the Andes.

The researchers therefore advocate the introduction of limit values for the DOM concentrations entering the river. Their findings in relation to the activities of the bacteria could help to specify these values in order to avoid overloading the river.

The aquacultures would then have to clean their waste water more effectively before re-introducing it to the river – for example using biological filters. In principle, these are large pipes filled with stones on which biofilm grows. The waste water enters at the top and leaves at the bottom, having been clarified by the bacteria in between. “Our results also show how large these facilities would have to be,” explains Norbert Kamjunke. T

he measured degradation rates can be used to calculate how much stone surface area is required for the desired purification efficiency.

The researchers also draw another conclusion from their study. They do not consider it advisable to install any further aquacultures on Chilean rivers. The authorities have already imposed a moratorium on new salmon farms in the country’s lakes. Operators are now considering the option of moving the farming of medium-sized salmon from the lakes to the rivers. “In theory that could work,” believes Norbert Kamjunke.

“But from an ecological perspective, it would not be a good idea.”