Village communities in the tropical regions of Africa, Asia and South America have not been using local forest resources as sustainably as is often assumed… 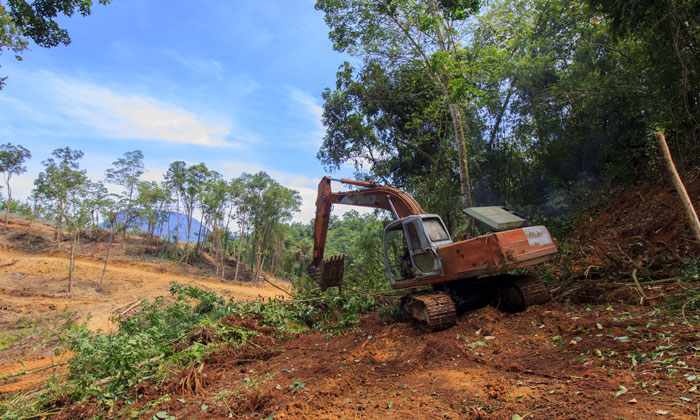 Village communities in the tropical regions of Africa, Asia and South America have not been using local forest resources as sustainably as is often assumed. This is the conclusion of a study published by scientists from the Helmholtz Centre for Environmental Research (UFZ) together with the Center for International Forestry Research (CIFOR) and Wageningen University in science journal Environment Research Letters.

According to the study, in 90% of the 233 villages analysed at least one forest product such as firewood, timber, food or animal feed has declined over five years.

To conduct the analysis, the UFZ researchers used standardised data from the Center for International Forestry Research (CIFOR- PEN project), based on surveys of village communities in 233 representatively selected villages in tropical regions of Africa, Asia and South America between 2005 and 2010. The interviewees were inhabitants from mostly small rural communities who depend in various forms on firewood, timber, food resources, animal feed or medications from nearby forests, mostly on a subsistence basis.

Villagers were asked, for example, what natural resources from the forests they used and how their availability had changed in recent years.

In 209 of all the analysed communities, or about 90%, interviewees reported that the availability of at least one forest resource had declined. One example is timber for construction purposes. In more than 75% of villages in Africa and South America in which people were interviewed, they reported a decrease in this resource. In Asia the percentage was almost 60%.

In around 75% of the villages studied in Africa and more than 50% in Asia, local populations reported declining availability of firewood. In village communities in Asia and Africa, all other forest products such as food, medications and animal feed were also reported to be scarcer. “In some places forest resources are not being used very sustainably,” says Dr. Kathleen Hermans, the first author of the study and a social geographer in the UFZ’s Department of Landscape Ecology. That this situation was so clearly in evidence was surprising, she adds. However, there are exceptions, especially in South America. Here, interviewees in many communities reported that resources such as firewood, medicinal plants and animal food had somewhat increased or remained stable over the last five years.

With the aid of statistical analyses, the researchers were able to demonstrate that excessive consumption of forest products is one of the main reasons why these resources are becoming scarcer. “Usage has increased in many places,” says Hermans. This could be due to the fact that in more than 90% of the villages the population has grown over the past decade, partly due to immigration.

However, Hermans points out that more detailed analysis would be required at local level to determine whether population growth had actually triggered higher demand for forest products. It would also be interesting to investigate what factors triggered migration to the villages. Another important factor in the depletion of forest products, according to the study, is the clearance carried out by large companies and local populations. By contrast, the ownership situation and the governmental and non-governmental regulations which existed at national, regional or local level did not play a significant role in the decline of forest resources in tropical regions.

In 89 of the villages surveyed, inhabitants reported that the availability of at least one forest resource was increasing more than it was decreasing or remaining stable. The researchers ascribe this mainly to changes in management measures, the reduction of logging and reduced utilisation of forest products. They also noted that the greatest increase in forest resources occurs in communities where the population experienced only a slight increase or actually fell.

Currently there is little global standardised information from villages on the use of forests because the information is so time-consuming to collect. This is what makes this study so exceptional. However, the CIFOR data is based on surveys of local populations and therefore on their perceptions. “The data doesn’t consist of objective measurements, so it isn’t free from biased perceptions,” says Hermans. She therefore wants to compare the household data with objective data, such as satellite data on forest coverage near the surveyed villages. She also intends to analyse whether there are certain patterns of resource usage and migration in village communities.

Hermans will be able to take these research approaches further in a new working group which she leads and which started work at the UFZ at the beginning of January.

Under the title “MigSoKo – Human migration and global environmental change: A vicious cycle?”, the team is studying the relationships between environmental change, population pressure and migration and their impact on the environment in tropical drylands, taking Ethiopia as an example. The €1.5 million project will last five years and is being funded 50-50 by the Federal Ministry of Education and Research as part of its socio-ecological research programme and by the UFZ.