The end of the traditional British fish & chips?

Great British fish suppers could become more like those enjoyed in Spain and Portugal, according to data being presented at the British Ecological Society’s annual meeting in Liverpool this week… 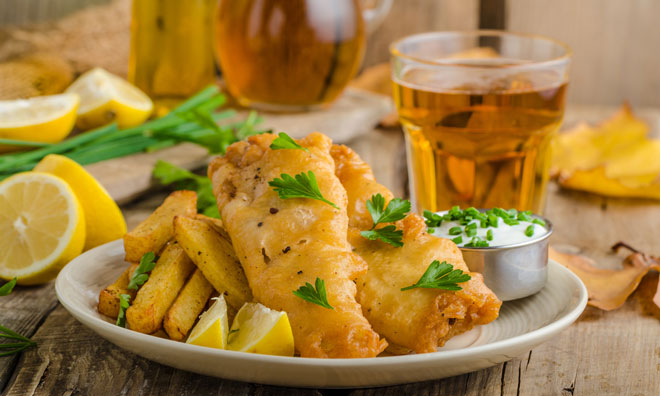 Great British fish suppers could become more like those enjoyed in Spain and Portugal, according to data being presented at the British Ecological Society’s annual meeting in Liverpool this week. Led by Dr John Pinnegar of Cefas (Centre for Environment, Fisheries and Aquaculture Science), the research reveals that as UK waters warm due to climate change, cold water fish such as cod are gradually being replaced by warm water species like squid.

“Our models for 2025 and beyond suggest that seawater temperature may continue to rise in the future. As a result, UK waters will become more hospitable for some species and less suitable for others, with the overall result that most commercial species will move northwards,” he says.

Cefas has been monitoring North Sea fish populations for the past 114 years. Using detailed records of where fish are caught and of water temperature, Cefas has been able to detect long-term changes in abundance and relate them to climate change and fishing intensity – as well as predict what the North Sea might look like in future.

“Cod numbers have been slow to recover after overfishing…”

The data show that squid numbers have increased dramatically over the past 35 years. In 1984, Cefas found squid at only 20% of its 76 survey stations in the North Sea, compared with 60% in 2014.

But while squid is on the rise, cod numbers have been slow to recover after overfishing. From a total stock biomass of 1.3 million tonnes in 1971, cod numbers fell to their lowest recorded level of 124,000 tonnes in 2004.

Following strengthened management of cod fishing, biomass increased to 295,000 tonnes last year. Although this level is considered sustainable, scientists believe the slow recovery is because the warming waters of the North Sea in recent years have hit cod reproduction.

The results have important implications – for both UK fish suppers and the fishing industry.

According to Dr Pinnegar: “UK consumers enjoy eating quite a limited range of seafood, but in the long term we will need to adapt our diets. In 2025 and beyond, we may need to replace cod and other old favourites with warm-water species such as squid, mackerel, sardine and red mullet.”

Warming temperatures present both threats and opportunities to the fishing industry. For example, summer squid fisheries have expanded rapidly in the Moray Firth as efforts to reduce over-fishing have prevented vessels from pursuing more traditional species such as haddock and cod.

“I would anticipate that currently small-scale fisheries targeting warm-water species such as squid, sardine and anchovy will continue to expand. They will probably represent a greater share of UK fisheries catches in 10 years’ time,” he concludes.

Dr John Pinnegar will present his results at the British Ecological Society annual meeting at ACC, Liverpool on Monday 12 December 2016.