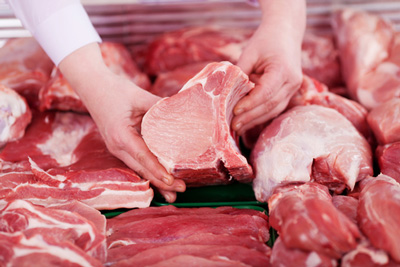 Researchers from the National Food Institute of Denmark have reviewed the results from a number of studies to examine which compounds in the meat affect cancer risk. Several large epidemiological studies have shown an association between intake of red meat, but particularly of processed meat and increased risk of colorectal cancer. In reviewing the studies, the researchers found the effect is less pronounced in European studies compared to the American studies. However, a general problem is that different studies define red and processed meat in various ways.

Haem iron is the type of iron found in meat. Based on animal studies as well as studies of haem iron’s activity in our gut, it is evident that haem iron may have a carcinogenic effect. It is not possible to estimate the contribution of haem iron to the total number of colorectal cancer cases, but based on population studies, the National Food Institute estimates that only a small proportion of these are due to haem iron.

Both heterocyclic amines (HCAs) and polycyclic aromatic hydrocarbons (PAHs), which are formed when meat is subjected to high temperature cooking, are known carcinogens. Several population studies have shown an association between development of cancer and consumption of meat that has been heated at high temperatures. However, the National Food Institute researchers says there is great uncertainty about the extent to which HCAs and PAHs contribute to the development of cancer in humans. The risk from HCAs can be reduced by ensuring a clean combustion in the grill so you avoid fat dripping on the heat source.

Nitrite is added to several types of processed meat, and can potentially form carcinogenic N-nitroso compounds (nitrosamines og nitrosamides) in the meat or in the gut. Food producers can reduce the cancer risk by minimising the use of nitrite and by adding ascorbic acid or iso-ascorbic acid, which inhibits the formation of N-nitroso compounds. The National Food Institute says more knowledge is still needed on N-nitroso compounds in meat products.

An increasing number of studies show that the bacterial composition of the gut affects the risk of developing colorectal cancer. This is because of various mechanisms in the intestine, which are caused by gut bacteria.

Certain latent carcinogens in cooked meat can for example be converted into a bioactive form in the gut. Thus, a high protein, low fibre diet, which promotes the growth of bacteria with a carcinogenic activity, increases the risk of colorectal cancer. Thus the bacterial composition of the gut and the rest of the diet also affect the development of cancer.

According to the National Food Institute, data suggest that a diet rich in fibre can help reduce the risk of cancer among meat eaters.

You can read the review ‘Mechanisms behind cancer risks associated with consumption of red and processed meat’, here.