The heat produced by the plant will be consumed in the Nestlé Waters bottling plant at Henniez, whose proportion of renewable energy will exceed 50%… 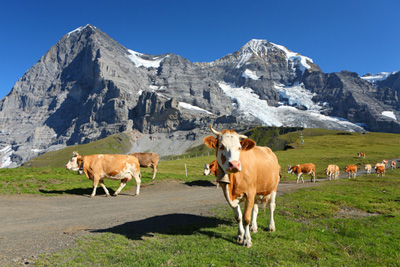 The new biogas plant is located in the Treize-Cantons industrial park, next to the Henniez bottling plant. Financed, built and operated by Groupe E Greenwatt, the plant will use 25,000 tons of agricultural fertilizer from 27 farms in the region every year. 3,800 tons of organic waste from the processes that produce Nespresso and Nescafé will also be used as a raw material to produce biogas.

The plant will produce 4 million kWh of electricity and 4.5 million kWh of heat by burning this gas in a cogeneration engine. The heat will be consumed in the Nestlé Waters bottling plant, whose proportion of renewable energy will exceed 50%. By replacing energy generated using fossil resources, the biogas plant avoids the emission of 1,750 tons of CO2 into the atmosphere every year.

The residual material left over at the end of the process constitutes a high-quality fertilizer that is used by partner farms. Since the methane is extracted in the process to produce the gas, these digested effluents make hardly any smell when they are spread. They have a very high nutritive value, are better assimilated by plants that mineral fertilizers and meet the criteria of all the most common organic labels.

The Treize-Cantons biogas plant marks a new chapter in the ECO-Broye programme launched by Nestlé Waters in 2009. Its aim is to stimulate and coordinate efforts to preserve the natural resources of Henniez and its region by involving farmers, authorities and key stakeholders in joint projects.