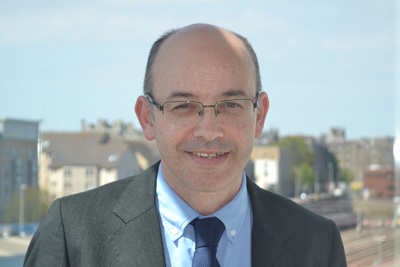 His appointment to the senior management team brings additional strategic oversight and leadership of FSS’s scientific activities in relation to food safety and diet and nutrition.

Professor Strachan currently holds a Chair in Physics at the University of Aberdeen specialising in foodborne illnesses such as E. coli O157, Campylobacter, Salmonella and Listeria.

Professor Strachan will be responsible for the delivery of the principle roles for science within FSS, from commissioning and evaluating research to communicating scientific and risk advice. He will act as Head of Profession for scientists within FSS. He brings nearly three decades of experience to develop a robust science and evidence strategy for the organisation, and will provide advice to the Chief Executive and the FSS Board.

An evidence based scientific approach

On his appointment, Professor Strachan said: “I’m delighted to join FSS in this role and look forward to leading on the evidence based scientific approach, which allows FSS and consumers to make informed decisions in relation to food.”

Commenting on the news, FSS’s Chief Executive Geoff Ogle said: “One of our key priorities is protecting consumers in Scotland from the risks of foodborne illness, and I am confident that Norval’s expertise, knowledge and experience will help to ensure the safety of Scotland’s food, and deliver wider scientific input in our key priority areas such as diet and nutrition.

“It’s a privilege to have someone of Norval’s calibre on board to support us in delivering a food and drink environment in Scotland that benefits, protects and is trusted by consumers.”