Posted: 6 May 2016 | Mandy Parrett, Editorial Assistant | No comments yet 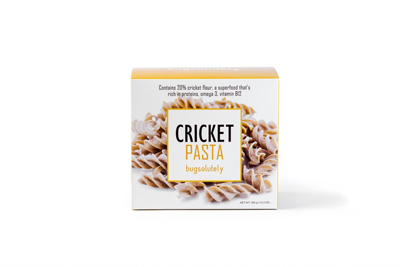 A new player on the food production scene, Bugsolutely are based in Bangkok and specialise in edible insect products. During May they plan to exhibit ‘Cricket Pasta’ at two fairs dedicated to food innovations – Seeds&Chips in Milan, Italy from 11-14 May and Eating Insects Detroit 2016 from 26-28 May.

Bugsolutely take their place in the market

Seeds&Chips is an international fair dedicated to food innovation from farm to fork. Hundreds of startups, food and technology companies, investors, visionaries and policy makers will come together to share their products and experiences. The fair includes an exhibition area and a series of conferences packed with experts from all over the world, including the Metro Group, Barilla, Accenture, Elior, Lavazza, Google Food and a number of food accelerators and VCs. Bugsolutely will take their place alongside other edible insect companies such as Entocube, Italbugs and Entonote.
At Eating Insects Detroit 2016 there will be speeches from experts in anthropology, entomology, nutrition and also companies that are helping to build the booming ‘ento-market’. Bugsolutely will be represented by Nathan Preteiselle, who will provide an overview of the Thai market, and with a booth in the exhibition area where packages of Cricket Pasta will be sold.

More than a couple of hundred edible insect startup companies entered the western market in 2015 and surveys indicate that between 30-50% of the population would like to sample edible insect products. Bugsolutely’s Cricket Pasta, which contains 20% cricket flour and 80% wheat flour, makes those acceptance rates even higher. Integrating crickets into a familiar product helps to change people’s perception, enabling everyone to experience the taste of insects. Considered a ‘superfood’ due to its nutritious benefits and being high in protein, Cricket Pasta is very sustainable because of its low environmental impact. Crickets need very little food and water (1,000 times less than a cow) and they grow incredibly fast. For this reason, the United Nation’s FAO and other international organisations are supporting the much needed diffusion of edible insects in western countries.