Packaging on supermarket goods can leave ‘older’ consumers feeling powerless and vulnerable, according to a new study… 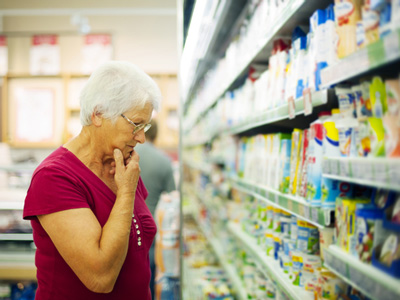 Packaging on supermarket goods can leave ‘older’ consumers feeling powerless and vulnerable, according to a new study from researchers at the University of Portsmouth. The research found that issues such as difficulty reading labels or opening tins can damage consumers’ sense of self-worth. Other problems included items being difficult to stack or too heavy to carry because of their packaging.

The findings revealed that ageing-related changes – such as arthritis and deteriorating eyesight and physical strength – made consumers more at risk of experiencing ‘vulnerability’ when buying packaged consumables.

Dr Nicholas Ford, of Portsmouth Business School, said: “A variety of products and services have been identified as inhibiting older people’s abilities to maintain their independence, from public transport to kitchen interiors and internet banking.

“However, few factors are highlighted as often as difficulties with packaging. Marketing research has found high levels of dissatisfaction with much packaging among consumers at large. In particular dissatisfaction has been reported among older consumers with fast-moving consumer goods packaging – i.e. non-durable packaged items such as tinned food, packet meals and toiletries.

“Studies show that due to changes in physical capabilities and social circumstances, older people risk suffering embarrassment and anger, and even potential illness and serious injury as a result of difficulties with packaging.”

The latest research is based on in-depth interviews with a cross-section of consumers aged between 59 and 85. All the study participants were living independently and shopping for themselves, so the packaging ‘interactions’ began in store, often when locating a product on the shelf.

Participants reported using a variety of methods for overcoming difficulties, including using pliers and screwdrivers, and even leaving items on the doorstep for the postman to open.

They also reported blaming themselves for problems with packaging – such as difficulty reading labels or resealing items – rather than the manufacturer.

Dr Ford said: “Blaming oneself is perceived as being easier than the challenge of voicing complaint.

“While seemingly innocuous when considered in isolation, the experiences shared by our participants suggest that the gradual build-up and continuation of stresses can lead to sustained feelings of frustration and powerlessness.”

The study concluded that ‘easy opening’ packaging could provide just one way for firms to add value for older consumers. Distinctive packaging was also highlighted as a way of more easily identifying products and giving the consumer a sense of control – but the study warns that products aimed at the senior market can alienate consumers who do not wish to be labelled ‘old’.

“By focusing only on ‘openability’ much of previous research in this area may have overlooked other elements of packaging which could be altered to aid older people in maintaining independent lives.

“Interestingly, a number of the problems highlighted in the study are also experienced by many younger consumers – so developing new packaging with the needs of older people in mind could add value for consumers in general.”

Dr Ford believes one solution might be the inclusion of discreet symbols to highlight products as examples of ‘inclusive design’.

He said: “Manufacturers need to achieve a balance between communicating the functional benefits to older consumers while maintaining mass market appeal.”