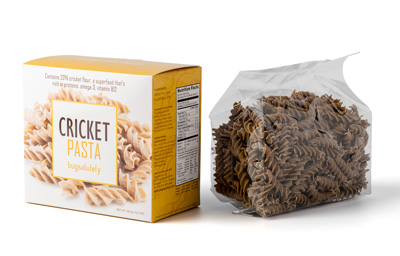 Pasta has had a revolutionary makeover with the introduction of Bugsolutely’s Cricket Pasta.

Bugsolutely has launched this innovative product for the fast growing market of food products based on edible insects. The company says the pasta benefits from an exceptional amount of nutritional value: including high protein, calcium, iron, vitamin B12, and Omega 3. All of these benefits are due to the characteristics of cricket flour. Protein is the key to the flour, as 70% of crickets are made of protein.

This superfood is also high in sustainability. Crickets need very little food and water and they grow very fast. For this reason, United Nation’s FAO and other organisations are supporting the diffusion of edible insects in western countries. According to the experts, insects are the protein of the future.

Bugsolutely Cricket Pasta is the result of months of research with multiple manufacturers. It’s a mix of durum semolina flour, wheat flour, and cricket flour sourced from selected suppliers that are GMP and HACCP certified. The production chain follows international standards and the product is FDA approved. Thanks to the cricket flour, the pasta’s distinctive brown colour matches the typical earthy taste – the taste of which is often associated with roasted almonds.

In October 2015 the European Parliament voted in favour of a new regulation leading to a green light for edible insects. Switzerland is in an “edible insect test phase” for one year, and although not specifically regulated, the North American market is picking up quickly. Within this context, more than one hundred startups entered the edible insect market in 2015 alone. This phenomenon, amplified by wide press coverage, should not be a surprise.

Health concerns: a growing issue for beverage can coatings

Study shows that saffron extract can reduce depression in adults