Are insects the alternative to animal protein? 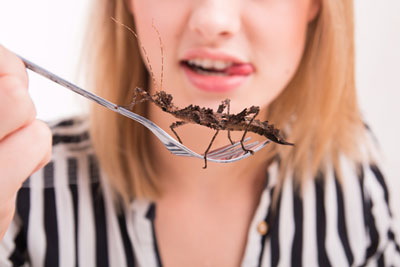 The growing consumer demand for protein, and the lack of new farmland to raise more livestock, could make insects an attractive alternative to traditional protein sources, according to a symposium at IFT15: Where Science Feeds Innovation hosted by the Institute of Food Technologists (IFT). “We have 7 billion people now and that’s projected to be 9 billion in 2050. We’re already using a third of the land on Earth for raising livestock, and the demand for protein is growing even faster than the population, especially animal protein,” said Aaron Dossey, Ph.D., founder of All Things Bugs LLC. “The good news is I think insects are a very nutritional alternative.”

Dossey’s company, which will produce about 25,000 pounds of cricket powder this year, has received research grants for several projects related to using insects as food, including how it can alleviate childhood malnutrition. He cited several properties that make it a valuable food source, including:

While the research is promising, George C. Ziobro, Ph.D., of the US Food and Drug Administration (FDA) Center for Food Safety and Applied Nutrition, cautioned that it would not be simple to add insects to the typical diet. He cited the FDA’s requirements that all food be clean, manufactured under sanitary conditions and properly labeled. In the case of insects used in food manufacturing, that means they must be raised specifically to be used as human food, not simply taken from the outdoors, because of the risk of disease or pesticides.

“We all eat insects or insect parts. In most cases, it is accidentally,” Ziobro said. “The FDA restricts the sale of insect-infested or insect-damaged foods. The vast majority of people don’t want to see part of their breakfast walk off the plate.”