3D printing has the potential to revolutionise the way food is manufactured within the next 10 to 20 years, according to a symposium at IFT15… 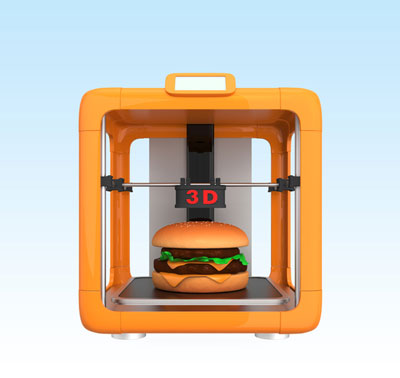 The use of 3D printers has the potential to revolutionise the way food is manufactured within the next 10 to 20 years, according to a symposium at IFT15: Where Science Feeds Innovation hosted by the Institute of Food Technologists (IFT) in Chicago. The price of 3D printers has been steadily declining less than $1,000 today for a personal-sized device, making them increasingly available to consumers and manufacturers. Although they are not widely used in food manufacturing yet, that availability is fuelling research into how they can be used to customise foods or speed delivery of food to consumers.

“No matter what field you are in, this technology will worm its way in,” said Hod Lipson, Ph.D., a professor of engineering at Columbia University and a co-author of the book Fabricated: The New World of 3D Printing. ”The technology is getting faster, cheaper and better by the minute. Food printing could be the killer app for 3D printing.”

Lipson, addressing the conference by video, said 3D printing is a good fit for the food industry because it allows manufacturers to bring complexity and variety to consumers at a low cost. Traditional manufacturing is built on mass production of the same item, but with a 3D printer, it takes as much time and money to produce a complex, customised product that appeals to one person as it does to make a simple, routine product that would be appealing to a large group.

For example, Lipson said, users could choose from a large online database of recipes, put a cartridge with the ingredients into their 3D printer at home, and it would create the dish just for that person. The user could customise it to include extra nutrients or replace one ingredient with another.

The US military is just beginning to research similar uses for 3D food printing, but it would be used on the battlefield instead of in the kitchen, said Mary Scerra, food technologist at the US Army Natick Soldier Research, Development and Engineering Centre (NSRDEC). She said that by 2025 or 2030, the military envisions using 3D printing to customise meals for soldiers that taste good, are nutrient-dense, and could be tailored to a soldier’s particular needs.

“Imagine warfighters in remote areas—one has muscle fatigue, one has been awake for a long period without rest, one lacks calories, one needs electrolytes, and one just wants a pizza,” Scerra said. “Wouldn’t it be interesting if they could just print and eat?”

Anshul Dubey, research and development senior manager at PepsiCo, said 3D printing already is having an impact within the company. For example, consumer focus groups were shown 3D-printed plastic prototypes of different shaped and coloured potato chips. He said using a prototype such as that, instead of just a picture, elicits a more accurate response from the focus group participants.

Speaking in December when the printer was unveiled, Will Papa, Hershey’s Chief Research and Development Officer, said, “We are now using 3-D technology to bring Hershey goodness to consumers in unanticipated and exciting ways.

“3-D printing gives consumers nearly endless possibilities for personalising their chocolate, and our exhibit will be their first chance to see 3-D chocolate candy printing in action.”