Eating chocolate every day is linked to lowered heart disease and stroke risk, according to research carried out by University of Aberdeen scientists… 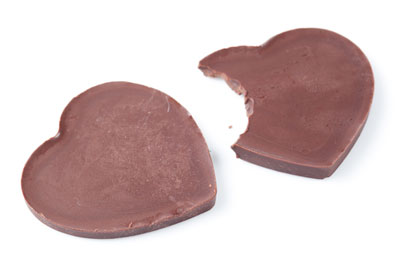 Eating up to 100g of chocolate every day is linked to lowered heart disease and stroke risk, according to research carried out by scientists at the University of Aberdeen. There doesn’t seem to be any evidence for cutting out chocolate to lower the risk of cardiovascular disease, conclude the researchers. They base their findings on almost 21,000 adults taking part in the EPIC-Norfolk study, which is tracking the impact of diet on the long term health of 25,000 men and women in Norfolk, England, using food frequency and lifestyle questionnaires.

The researchers also carried out a systematic review of the available international published evidence on the links between chocolate and cardiovascular disease, involving almost 158,000 people—including the EPIC study participants.

The EPIC-Norfolk participants were monitored for an average of almost 12 years, during which time 3013 (14%) people experienced either an episode of fatal or non-fatal coronary heart disease or stroke.

Around one in five participants said they did not eat any chocolate, but among the others, daily consumption averaged 7g, with some eating up to 100g. Higher levels of consumption were associated with younger age and lower weight (BMI), waist: hip ratio, systolic blood pressure, inflammatory proteins, diabetes and more regular physical activity —all of which add up to a favourable cardiovascular disease risk profile. Eating more chocolate was also associated with higher energy intake and a diet containing more fat and carbs and less protein and alcohol.

The calculations showed that compared with those who ate no chocolate, higher intake was linked to an 11% lower risk of cardiovascular disease and a 25% lower risk of associated death. It was also associated with a 9% lower risk of hospital admission or death as a result of coronary heart disease. And among the 16,000 people whose inflammatory protein (CRP) level had been measured, those eating the most chocolate seemed to have an 18% lower risk than those who ate the least.

This is an observational study so no definitive conclusions about cause and effect can be drawn. And the researchers point out that food frequency questionnaires do involve a certain amount of recall bias and underestimation of items eaten. Reverse causation—whereby those with a higher cardiovascular disease risk profile eat less chocolate and foods containing it than those who are healthier—may also help to explain the results, they say.

Nevertheless, they add, “Cumulative evidence suggests that higher chocolate intake is associated with a lower risk of future cardiovascular events.”

And they point out that as milk chocolate, which is considered to be less ‘healthy’ than dark chocolate, was more frequently eaten by the EPIC-Norfolk participants, the beneficial health effects may extend to this type of chocolate too.

“This may indicate that not only flavonoids, but also other compounds, possibly related to milk constituents, such as calcium and fatty acids, may provide an explanation for the observed association,” they suggest. And they conclude, “There does not appear to be any evidence to say that chocolate should be avoided in those who are concerned about cardiovascular risk.”

The study is published in the journal Heart.