Work is underway to transform a Nestlé USA milk factory into a zero-water factory, meaning the plant will not use any local freshwater for its operations… 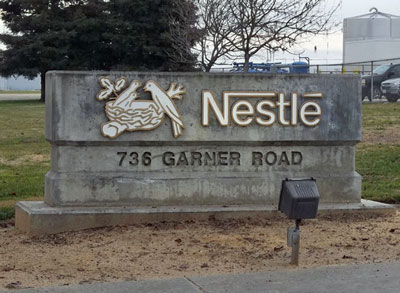 Nestlé is investing in innovative technology to help reduce the amount of water it uses in California at the five water bottling plants and four facilities where food or pet-care products are manufactured. This includes plans to convert one of its US factories in to a zero-water facility. “Technology we have already deployed successfully elsewhere in the world to help address the challenges of water scarcity will improve our water use efficiency, relieving pressure on California’s water resources,” says Nestlé’s Head of Operations José Lopez.

Work is underway to transform the Nestlé USA milk factory in the city of Modesto into a zero-water factory, meaning the plant will not use any local freshwater resources for its operations. Last year in Mexico, Nestlé opened its first zero-water plant, which extracts all the water it needs from milk used to manufacture dairy products.This new project at the California site should save nearly 63 million gallons of water each year, equivalent to 71% of absolute withdrawals in 2014. Around $7 million has been invested in the project which is due to be completed by the end of 2016.

At the Nestlé USA factories in Bakersfield and Tulare savings of more than 26 million gallons of water each year have been identified, potentially reducing the plants’ absolute annual withdrawals by 12% compared to 2014 levels. And planned investments this year in conservation measures to reduce the amount of water used in Nestlé Waters’ bottling plants in California are projected to save 55 million gallons of water a year, a reduction of nearly 8% compared to 2014 levels.

Nestlé uses a phased approach to reduce water in its factories. Firstly, engineers look for ways to optimise the processes. They then look for opportunities to reuse the water, for example using cooling water in vacuum systems. In the third phase, such as in the zero-water factory, they deploy innovative methods to extract water from raw materials and then recycle it.

In California, Nestlé will apply a methodology called ‘Water Target Setting’ which not only identifies opportunities to reduce water usage but also the most appropriate technology to be implemented.

This approach has been used in more than 80 factories worldwide, identifying opportunities to reduce water usage by 10%-30% depending on the location. For example, at Nestlé’s Hawdon factory in the UK an anaerobic digestion system which converts solid and liquid sewage waste into clean water and natural gas has reduced the plant’s water footprint while at the same time cutting the amount of greenhouse gases emitted, and reducing solid waste significantly.

Nestlé is carrying out assessments of its facilities in California as part of an ongoing effort to improve operational performance and the impact of its plants on the watersheds in which they operate.

“We are focused on how to adapt our bottling and our manufacturing operations, and our supply chain, to make them more resilient and more resistant to drought conditions,” he says. “We will test innovative solutions, prove they are efficient and effective and will share what we learn with others.”

Globally, Nestlé has already cut its total water withdrawal in absolute terms by almost one-third over the past 10 years, and has publicly committed to do more. It aims to reduce its withdrawal per tonne of product by 40% by 2015, compared to 2005. It currently has 376 water-saving projects underway in its factories worldwide, which are projected to save around 1.84 million cubic metres of water this year.