Concerns over the spread of animal diseases are mounting in Lebanon as Syrian refugees bring unvaccinated animals over the border, FAO has warned… 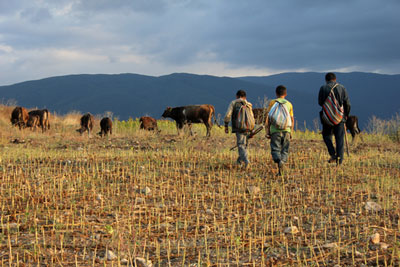 Concerns over the spread of high impact transboundary animal diseases are mounting in Lebanon as some of the 1.5 million refugees fleeing the conflict in Syria have brought with them large numbers of unvaccinated animals, the Food and Agriculture Organization of the United Nations (FAO) has warned. FAO is now carrying out the second phase of a campaign to immunise as much of the country’s livestock as possible, with a target of vaccinating all animals. This is, however, expected to be difficult to achieve because of the challenges in reaching some of the more remote areas and in gaining the confidence of the farmers and pastoralists residing there.

The project follows on from a successful initial vaccination programme last year which was credited with stopping any widespread animal disease outbreaks. Both phases received funding from the United Kingdom’s Department for International Development (DFID).

The vaccination campaign aims to cut down the numbers of animals becoming ill or dying due to preventable diseases and to protect vulnerable people living in rural areas. As many as 70,000 cows and around 900,000 sheep and goats could be exposed to transboundary diseases if left untreated, according to Lebanon’s Ministry for Agriculture.

“The idea is to reduce the risk of disease, and avoid drops in the productivity of the national herd,” said Maurice Saade, FAO Representative in Lebanon. FAO estimates that almost 60 percent of livestock farmers in Lebanon depend on dairy animals as their main source of income.

Several animal diseases are highly contagious and can spread extremely rapidly, irrespective of national borders. They can cause high mortality and morbidity in animals, and so have serious socio-economic and sometimes public health consequences.