Following a successful introduction with Valio, the fully renewable package, Tetra Rex Bio-based, is being rolled out to Tetra Pak customers worldwide… 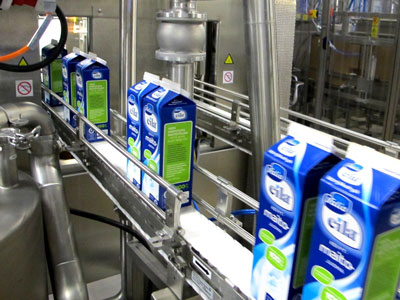 Valio has been selling its Valio Eila® brand of lactose free semi-skimmed milk drink in Tetra Rex Bio-based for the past three months and now plans to use the fully renewable package for some other products in their range.

“After all of the hard work and significant investment that has gone into bringing this package to market, it is hugely rewarding to get such a positive response from both Valio and their consumers,” says Charles Brand, Executive Vice President of Product Management & Commercial Operations for Tetra Pak.

Tetra Rex Bio-based is available in a range of sizes, from 250ml to 2000ml, for all chilled milk specifications. The package will soon be deployed by more customers in Europe, and the company is already having discussions about launching it with dairy companies in other parts of the world.

Tetra Rex Bio-based is manufactured solely from a combination of plastics derived from sugar cane and paperboard. Like the Forest Stewardship Council™ (FSC) certified paperboard, the plastics can be traced back to their origin, affording the package the highest category of bio-based certification from Vincotte, the internationally-recognised assessment body.

The bio-based plastics used by Tetra Pak are produced by Brazilian chemical company, Braskem, which sources all of its feedstock from sugar cane grown on degraded pastures.

“Tetra Rex Bio-based offers customers a fully renewable package made from materials that can be traced back to their plant-based source.  It’s good for the environment, and it’s excellent for communicating with consumers … the product they actually hold in their hands is derived entirely from plants.  The pack that grows back,” says Brand.

Tetra Rex Bio-based scooped a Gold Award at the Pro2Pac Excellence Awards in the UK last week for being the world’s first carton made entirely from plant-based, renewable packaging materials.