Goats and sheep in many countries are increasingly threatened by peste des petits ruminants (PPR). Upcoming conference discusses elimination of PPR by 2030… 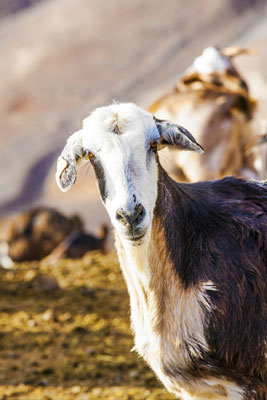 This highly contagious viral disease causes losses of between $1.5 and 2 billion every year. PPR has spread to around 70 countries in Africa, the Middle East and Asia, to regions where hundreds of millions of the world’s poorest people live.

But PPR can be defeated, as proven by the example of rinderpest, which in 2011 became the first animal disease to be eradicated by humankind.

The eradication of PPR will have a major positive impact, not only on the livelihoods of poor farmers, but also on the post‐2015 Development Goals and the UN’s Zero Hunger Challenge. It will also highlight the role played by the veterinary profession in poverty alleviation and food security.

From 31 March to 2 April 2015 representatives from around 70 countries – including Ministers and OIE national Delegates, the heads of FAO and OIE (Dr José Graziano da Silva and Dr Bernard Vallat), donor agencies, the scientific community, the private sector and civil society – will meet in Abidjan, Ivory Coast to discuss and endorse the global control and eradication strategy and launch the global PPR control and eradication campaign, aiming to eliminate the virus by 2030.

The conference will provide an update on the latest scientific developments related to PPR and will highlight experiences from previous control programs that have a positive socio-economic impact for poor farmers around the world.

The conference is jointly organized by FAO and OIE together with the Government of the Republic of Côte d’Ivoire.

For more information about the International conference on control and eradication of PPR in Abidjan, Cote d’Ivoire (31 March-2 April), please visit www.oie.int/eng/PPR2015