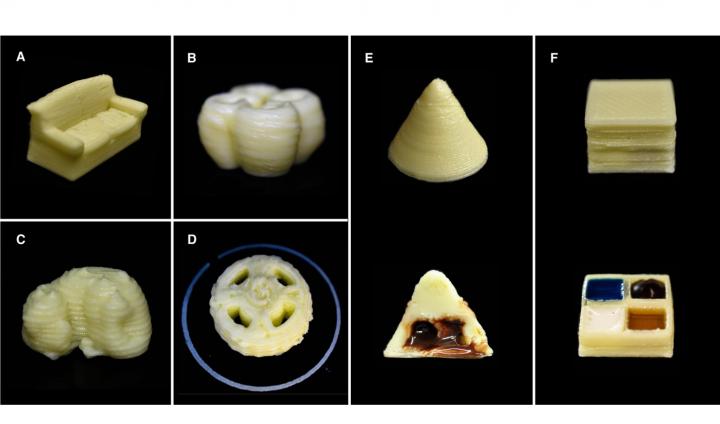 A simple method to 3D print milk products has been discovered by a team from Singapore University of Technology and Design (SUTD).

The researchers have developed a method to perform direct ink writing (DIW) 3D printing of milk-based products at room temperature, while maintaining its temperature sensitive nutrients.

Although there are a range of methods in which food can be printed, for example selective laser sintering (SLS) and hot-melt extrusion, they are not suitable for milk. This is due to some of the nutrients (ie, calcium and protein) in milk being temperature sensitive. A workable alternative is cold-melt extrusion, but this requires the use of rheology modifiers or additives to stabilize printed structures, and optimising additives is a difficult task.

The team from SUTD’s Soft Fluidics Lab managed to alter the rheological properties of the printing ink, demonstrating DIW 3D printing of milk by cold-extrusion with a single milk product, namely powdered milk. The concentration of milk powder allowed for the simple formulation of 3D-printable milk inks using water to control the rheology.

According to the team, this method could also be used to formulate various nutritional foods, including meals served to hospital patients with special dietary requirements.

Singapore University of Technology and Design

Singapore University of Technology and Design