Emerging contaminants in the water we drink

People consume water from a wide variety of sources within the aquatic ecosystem and the control of contamination is an important issue, not only for human health, but also for the environment as a whole. The role fertilisers and pesticides play in changing aquatic ecosystems across the world is such a well-documented concept that it is taught in most schools, but the scope of water contamination extends far beyond algal blooms and insect population depletions. 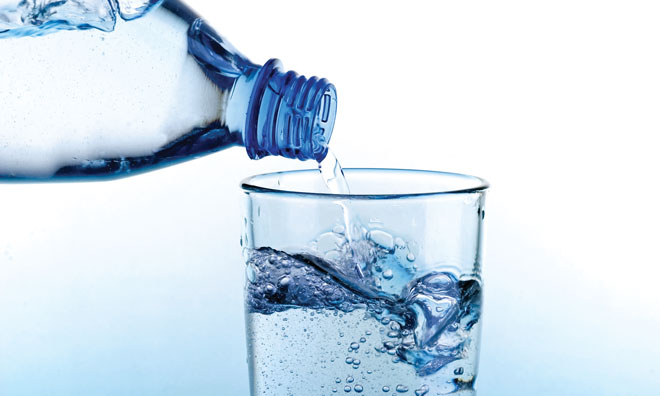 The way the water we drink is treated depends on where in the world we are. Many countries have put in place very detailed regulations and controls for drinking water.

How is drinking water treated differently in Europe compared with the rest of the world?

Unlike treated tap water in Europe, the bottled water consumed comes almost exclusively from natural sources – the most common being natural mineral waters which constitute approximately 82% of consumed water. Approximately 15% are spring waters and only about 3% are table waters (treated bottled water). These natural waters cannot be altered or disinfected and, thus, must be of a high quality in the first place, being drinkable ‘from the source’. To ensure this quality is maintained, the European Union issues directives that all member states must adhere to.

The European concept of ‘original purity’

The lack of alteration or disinfection stems from a 1972 proposal put forward in the Codex Alimentarius stating that a new approach for mineral water was to be considered in Europe. This proposal suggested that the inherent difference between bottled mineral water and ‘ordinary drinking water’ was the water’s ‘original purity’. At the time there had been long-standing public discussions regarding the microbiological safety of bodies of water, particularly in southern European states where higher levels of microbes lead to increased chlorination.

The conclusion of the Codex was that mineral waters must be properly microbiologically assessed at their source, in order to determine if the water was safe for human consumption in an unaltered state. This led to the publication of the Codex Standard for Natural Mineral Waters 108-1981. The outcome of the implementation of this standard has forced manufacturers to protect the entire catchment area of their water source and, while this originally focused on contamination from microbes, improved chemical characterisation techniques have led to the expansion of the ‘original purity’ concept to now also include chemical contaminants.

The rest of the world

In the rest of the world, however, non-mineral water sources are more common. Glacial and surface water can be consumed because the legislation and regulations allow for disinfection and contaminant removal. Theoretically, even wastewater could be treated to be drinkable, although this is not very common.

Although the way water is sourced varies in different areas of the world, the underlying threat of contamination remains the same. In Europe natural sources must be shown to be contaminant free and in the rest of the world, processed water must not exceed certain threshold levels, or values are limited to be potable. The contaminants themselves come from a variety of sources and can include a range of organic micropollutants, including the following:

When contaminants degrade they break down into particles (known as metabolites) that do not degrade further. When substances have broken down as much as they can, the remaining (nondegradable) metabolites will continue to make their way into the water system (Figure 1) and potentially into drinking water. 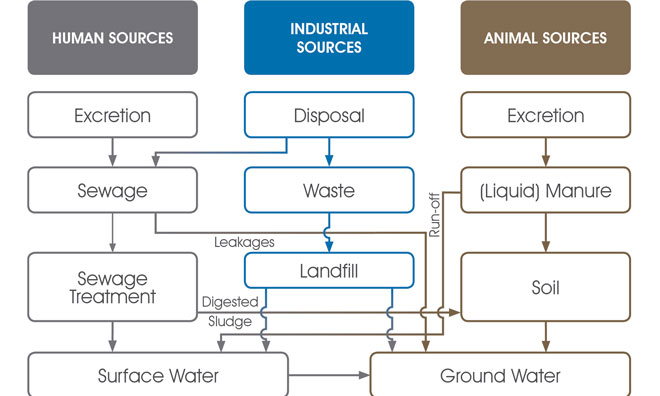 It is interesting to note that the increase in the use of household sweeteners has become a cause for concern with regulatory and environmental bodies. Sweeteners work by being stable compounds that convey a sweet taste. This designed stability makes these substances unreactive and are therefore not absorbed by the body; hence they have zero calories. It is for this very reason that they have become a contamination issue because once they make it into the water table, they cannot be degraded in the same way as many other waste compounds and, thus, have become a real issue to deal with.

The effect of water contamination

The more well-known contaminants are already well regulated, but in the rapidly-evolving world we live in scientific and industrial advancement gives rise to new contaminants all the time. Improved detection methods can now identify previously-unknown substances that have been present historically. A real-world effect of this is the presence of synthetic hormones entering waterways.

A number of studies involving various fish species in the UK concluded that British rivers contain environmental oestrogens (thought to be sourced from human contraception1 , food packaging and personal care products2 , pesticides3 and even some plasticisers4 ) that are capable of disrupting the fish’s sexual development.

The risk of emerging contaminants to the general population

The substantial margin of safety for the consumption of most emerging contaminants in drinking water suggests that the potential risk to human health is small. The general consensus by a number of governmental, environmental and regulatory stakeholders seems to be that the detection of emerging contaminants should continue to be assessed, and if the concentrations of these substances begin to represent a risk, strategies can be developed to incorporate fresh concerns into the existing legislative and regulatory framework. The way in which this links to the concept of ‘original purity’ is currently being discussed by EU member states and a guideline is being prepared to reflect the risk of emerging contaminants.

Aside from food safety aspects, a natural, low environmental impact alternative is appealing for many consumers of bottled water. Bottlers taking care of their resources are not only protecting the environment, but are also proactively working to avoid the contamination of their products, reduce cost for treatments and add value by offering a natural product.

As new products, pharmaceuticals and pesticides are introduced into the marketplace, they may also find their way into water resources. Inevitably, as water detection technologies improve, a wider variety of metabolites will be found in drinking water sources. While the detection of such compounds in low concentrations will not necessarily represent a health concern, data about these compounds will aid scientists, environmentalists and regulators to determine at what level these substances will represent a threat to human and environmental health and will greatly assist in the development of mitigating strategies when they are needed. The one consistent message will always be the importance of protecting the quality of the water we drink, whether from the tap or in bottles.

It is important to remember that once the contamination of ‘deep’ water sources occurs, the water cannot be sold in Europe as Natural Mineral Water if it requires alteration or disinfection in any way. Thus, the best way of preventing issues from arising is to protect the catchment area of any particular water source.

Dr Ulrich Kreuteris NSF Technical Manager. He supervises all technical aspects of NSF International’s bottled water and beverage certification operations in the Middle East and Africa (EMEA) region. His position also involves managing all of the testing and certification, auditing and training services.