Food fraud is a challenge, both to food businesses and consumers, and is a growing concern worldwide. Couple this with the introduction of allergens into the food fraud supply chain and the results can have devastating consequences. The impact of food allergens entering foods undetected through food fraud can be life-threatening, or even fatal. 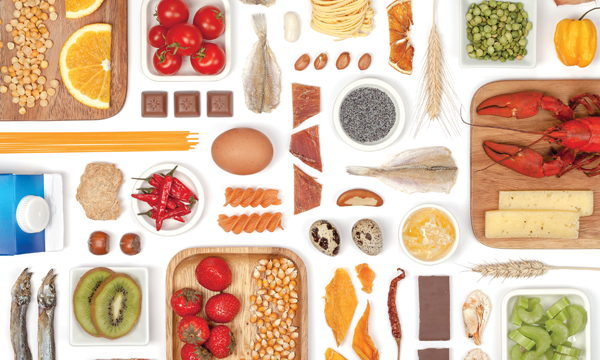 In a recent ground-breaking trial, a takeaway restaurant switched almond powder for a cheaper ground nut mix containing peanuts in a curry sauce in order to save costs, resulting in the death of a 38 year-old who was allergic to peanuts. Several weeks prior to this, the restaurant ignored warnings from enforcement officers when another customer with a peanut allergy had a reaction requiring hospital care. The restaurant owner was found guilty of manslaughter by gross negligence and received a six-year jail sentence, setting a precedent for the food safety industry1 .

What is food fraud?

Cutting a substance with a cheaper product is well known in the drug trade, as is adding cheaper additives to petrol and oil . Food and drink have moved into the fraud arena as a target by not only small to medium enterprises, but by organised crime syndicates as well – it is estimated that 1/3 of what we put into our shopping trolley is not what it claims to be – it’s all about the money2.

Incidents of food fraud occur for a number of reasons, mostly that of economic gain. Deliberate and intentional acts include substitution, addition, dilution, tampering, or misrepresentation of food, ingredients or packaging. Making misleading statements about a food product is also considered food fraud.

Some incidents are unintentional and in Canada fall under ‘regulatory offenses,’ which impose penalties for mistakes that are unintentional. Recently fined $1.5 million on these grounds was a vegetable grower in Ontario that mislabelled Mexican produce as Canadian-grown3.

The leading cause of food recalls in the UK is non-declared food allergens on packaged food: 96 products were recalled in 2015, and 60 products in 2014 due to unreported allergens on pre-packed food labels. Whether or not the omission of allergen ingredients is intentional or unintentional, it is considered food fraud.

90% of all food allergic reactions are caused by only eight foods: milk, eggs, peanuts, tree nuts, fish, shellfish, wheat and soya. But it is important to note nearly any food can trigger an allergic reaction – at any age.

There are 14 food allergens that must be declared to consumers in the UK by law: celery, cereals which contain gluten, crustaceans, eggs, fish, lupin, milk, molluscs, mustard, tree nuts, peanuts, sesame, soybeans and sulphur dioxide (sulphites). Other countries provide food allergen awareness through their legislation, such as the USA which requires eight food allergens that must be declared, known as ‘The Big 8’; the UAE have nine, and Canada and Australia have the ‘10 Food Allergens’.

The number of people with food allergies is increasing year on year; currently there are up to 8% of children and 1-3% of adults that suffer from food allergies – that’s over 250 million people worldwide.

Food products can be fraudulently substituted with food allergens – such as adding eggs to bulk out or add protein value to a food, or adding cow’s milk to coconut milk for economic gain – and can go by undetected. The unsuspecting consumers can find themselves in a life threatening situation due to an allergic reaction.

Food frauds where foods have been substituted or diluted with allergens create a substantially greater risk to consumers that have food allergies. Some recent examples are as follows:

Peanuts used instead of almonds

Peanut allergy is different from tree nut allergy. Peanuts are not actually a nut; they are a legume (a plant family related to peas and beans). They are nicknamed ‘groundnuts’ because they are grown in the ground and harvested in a similar way to potatoes. ‘Groundnuts’ must not be confused with ‘ground nuts,’ which are mixed nuts that are ground and may contain both peanuts and tree nuts.

This is particularly a hazard for peanut allergy sufferers, as they might assume ‘ground nuts’ are only ground tree nuts. There are eight tree nuts that must be declared on ingredient lists in the UK, and must be identified by the name of the specific nut: almond, hazelnut, walnut, cashew nut, pecan nut, Brazil nut, pistachio nut and macadamia nut (also known as Queensland nut). This is because people who are allergic to one type of tree nut may not necessarily be allergic to another.

A ‘Natural’ Coconut drink containing milk was recalled because the milk content was not declared on the label – this happened after the death of a 10-year-old who was allergic to dairy products4.

Japanese Sea Bass was sold as Sea Bass (a different species of fish, with a different price tag) to a major UK frozen foods retailer. The supplier falsified records for financial gain and was consequently sentenced to six months in prison and his company was fined £50,0005. The fish fraud industry is big business, increasing their profits by passing off a cheap fish in place of an expensive one. The Boston Globe carried out a five-month investigation into the mislabelling of fish. They collected fish from 134 restaurants, grocery stores and seafood markets in the area, and had them DNA tested. The results proved that 48% of the fish were sold with the wrong species name – with money as the prime motivator. In fact, one restaurant sold a flounder fillet at $23 but it was really a catfish from Vietnam known as swai, often priced under $4 a pound and much lower in nutrition. At another restaurant, white tuna was found to actually be escolar – an oily, cheap fish that is banned in Japan. It is nicknamed the ‘ex-lax’ fish by some, because it causes digestion problems6.

The 1981 Spanish ‘cooking oil epidemic’8 caused an estimated 1000 deaths, with more than 25,000 people affected and injured, and a large number developed chronic disease or were permanently disabled. Industrial grade rape – seed oil, which contains aniline (a toxic compound, used to make dyes, drugs, explosives, plastics, and photographic and rubber chemicals), was sold at local weekly street markets as olive oil. A long investigation finally discovered the cause and the source; high profile oil merchants were arrested9.

These acts by fraudsters can take place anywhere along the food supply chain, from harvest, manufacture, packaging and distribution to preparation and service. The top 10 most fraudulent foods

Some foods are easier to manipulate; some create a greater financial gain; and some are more difficult to identify as fraudulent (sometimes only through DNA testing can a fake food be detected). These foods are therefore more vulnerable to fraud.

Below are the top 10 most fraudulent foods10, in order of how frequently they are ‘frauded’, followed with ingredients they are commonly diluted or replaced with. Notice that many of the ingredients used to dilute or replace are common food allergens, increasing the risk for people with food allergies:

The first line of defence is to use reputable suppliers to strengthen your supply chain security. Ensure that your suppliers are equally as dedicated and committed to controlling and managing allergens as you are. A supplier having various allergen control plans in place indicates they are dedicated to managing allergens all along the supply chain. These include such measures as having a documented Allergen Control Plan; having a system that notifies you if there are any changes to the ingredients prior to delivery; providing an agreed approved substitutions list; and providing a list of allergenic products that they produce, specifically on equipment that is shared with ingredients that you purchase. Almonds must be identified by the name of the specific nut

It is important to have a robust traceability system in place to help isolate the source and extent of potential safety control problems, including points of food fraud activity. By following raw materials through production, processing and distribution, it will reduce unsafe products, which will reduce the possibility for bad publicity, liability and recalls.

Documentation of your traceability records, as well as other schedules and policies, are essential to effective monitoring of allergens and potential food fraud. Records must be checked on a daily basis and signed and dated to be considered complete and accurate, all of which are required for evidence of due diligence.

First launched in 2011, an INTERPOL-Europol coordinated initiative has engaged to identify criminal networks profiting from food fraud. Initially consisting of 10 countries working together, the operation now involves almost 60. Cooperation across borders with a multi-agency approach has successfully uncovered the largest seizures of food and drink fraud ever. Thousands of tonnes and millions of litres of hazardous fake food and drink – many containing food allergens – have been confiscated and arrests have been made worldwide11.

Join the battle against food fraud

Share food fraud information within the UK food business industry – the National Food Crime Unit has launched ‘Food Crime Confidential’, where anyone with suspicions about food crime can report in safety and confidence, by telephone or email: 0207 276 8787 and foodcrimefoodstandards.gsi.gov.uk12