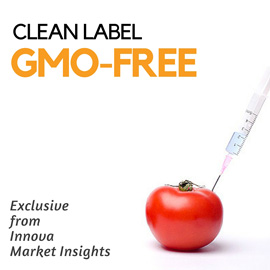 With ongoing interest in clean labelling and greater transparency, the free-from category is continuing to grow globally and, in addition to high-profile developments in areas such as lactose- and dairy-free and gluten-free foods and drinks, there has also been a marked upturn in interest in GMO-free or non-GMO products.

The use of genetic modification has become an issue in recent years in the US in particular, where there has traditionally been only limited consumer resistance to GM foods. While GM foods have to be labelled in other parts of the world, notably including the EU, this has not been the case in the US to date. After rising levels of concern, the growing use of GMO-free labelling and the development of schemes such as Non-GMO Project Verification, some US states are starting to discuss introducing their own legislation.

In terms of product activity, launches featuring GMO-free claims and labelling remain relatively limited on a global scale. While over 13% of launches recorded by Innova Market Insights in the 12 months to the end of August 2015 were marketed on an additive-free or preservative-free platform, 8% were presented as organic and over 6% as natural, just 4% used non-GMO or GMO-free labelling, although this was still a significant rise year-on-year, driven mainly by rising levels of interest in the US. Over the 12-month period, the US accounted for 43% of global launches using GMO-free claims, moving ahead of the EU on 40%, despite the significant number of countries involved in the latter region.

The use of GMO-free claims in the US reached nearly 11% of total food and drinks introductions, with snacks and cereals leading in terms of numbers, reflecting the significance of GM ingredients using high levels of cereals for food. While snacks had the highest number of GMO-free introductions overall in the US, cereals led in terms of share, with over 34% of introductions of breakfast cereals and cereal bars featuring this type of labelling, compared with just under 25% for snacks. As a result of growing consumer concerns over the issue, pressure for the right to choose non-GMO products resulted in the rise of GMO-free claims, the development of a non-GMO movement and schemes such as the Non-GMO Project Verified label, launched in the US in 2008 as a non-profit collaboration to ensure the sustained availability of non-GMO food and drink choices. It is reported that over 30,000 products have now been verified and that sales of products using the Non-GMO Project Verified label have reached over $12bn, up massively from about 5,000 products with sales of $1.2bn in 2011.

The move of non-GMO foods into the mainstream in the US has largely taken place since 2013 and followed a number of developments, including the decision by the Whole Foods Market retail chain, announced in 2013, to require GM ingredient labeling for all products sold in its stores; the commitment by Ben & Jerry’s Ice Cream to removing GM ingredients by mid-2014; and the announcement of Chipotle Mexican Grill to eliminating GM ingredients in foods in its restaurants. This was followed in early 2014 with the move of two mainstream breakfast cereals brands to non-GMO status – General Mills’ Cheerios and Post’s Grape Nuts.

There has also been relatively strong interest in non-GMO labelling in the dairy industry, where a natural image has traditionally been important, and growing interest has led to ongoing activity in organic and pasture milks. There is a strong link between organic dairy lines and GMO-certification, with many products using both types of positioning, including some leading organic dairy producers such as Stonyfield Farm and Organic Valley, as well as non-dairy drink lines such as Blue Diamond’s Almond Breeze and White Wave’s Silk. The leading US Greek yoghurt brand Chobani is also certified as non-GMO, doing this in conjunction with the Eurofins food testing organisation and its labelling reflects this.

Dairy products have been one of the key areas for non-GMO or GMO-free labelling in Europe, where, despite compulsory EU regulations on labelling of genetically-modified foods having been in force since the 1990s, there has still been ongoing pressure to verify and more easily identify GMO-free food and drinks. This has been led by countries such as Germany and Austria.

Austria has seen particular development in the use of GMO-free labelling for dairy products, which is not surprising in the light of its ongoing interest in marketing the purity of its dairy products. Many of its pasture milk products (more often called Heumilch or hay milk in Austria) are being launched and marketed in conjunction with other product benefits, perhaps most notably as being GMO-free. Production of pasture milk reached 430 million kg in 2014, equivalent to 16% of total output, with organic lines making up 25% of the total.

Dairy launches using a GMO-free logo accounted for 27% of total Austrian dairy introductions recorded by Innova Market Insights in the 12 months to the end of May 2015, compared with 3.3% in the EU as a whole, 5% globally and 10% in the US.

In the US, 75% of consumers claim to read the nutritional and ingredient labels of food products, but while they may increasingly want to understand what they eat, research by Healthfocus in 2014 indicated that 27% of consumers did not understand most on-pack symbols and claims. This is being addressed by regulators with new laws pushing the disclosure of additional information and greater transparency, as well as by companies themselves with voluntary initiatives such as Facts up Front in the US and traffic light labelling in the UK driving more prominent front-of-pack nutrition facts.

One response to “Clean label: GMO-free and non-GMO”