Aerosol droplets and cross-contamination risks in the food industry. By Christine Faille and Erwan Billet. 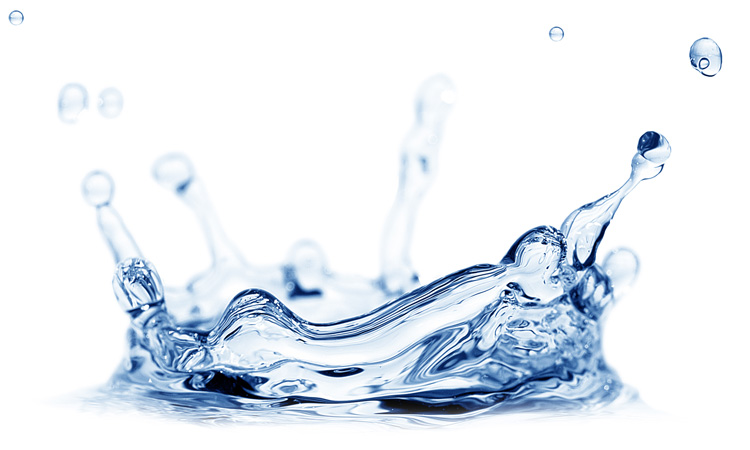 Industrial food contact surfaces are now widely recognised as a main source of food contamination. Surfaces can become contaminated through direct food contact, but also via splashes or aerosol droplets (bio-aerosols) that contain food or sanitation product residues, as well as bacteria, moulds, yeasts or viruses.

According to the World Health Organization (WHO), aerosol transport occurs in droplet form when >5 μm, and in airborne form when ≤5 μm. This article focuses on contamination transmission by droplets.

During food processing, aerosols can be dispersed by air or water flow and originate from a variety of sources. One prime example is ventilation systems; droplets containing microorganisms can be dispersed from condensate on the cooling fins of evaporative chillers.1 Viable aerosols are also often a by-product of cleaning or rinsing, the flooding or cleaning of drains is a frequent source of aerosol formation and of spoilage and pathogenic bacteria, including Listeria monocytogenes. These aerosols would also increase airborne microflora for around 40 minutes.2

Other surfaces which could contribute towards cross-contamination include floor tiles. Holah et al. (1990) demonstrated the potential for Listeria to be spread around food production areas by a high‑pressure/low volume spray lance, or a low‑pressure/high-volume hose. This practice favours aerosol formation as it forces air out of the drain as the liquid enters.

Newly formed aerosols could be either directly projected onto surfaces or dispersed from high to low-pressure on air currents within the processing area. As aerosols can remain suspended in the air for various periods, they can contaminate new areas at different distances from the droplet formation. 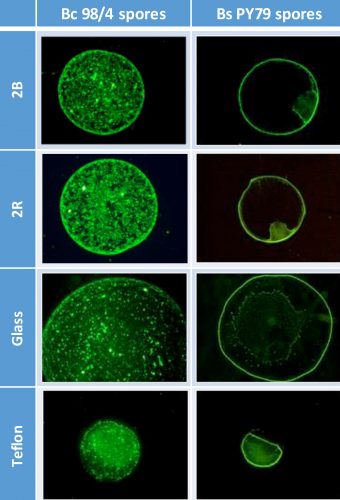 Not only is transport and ultimate settling affected by the size, density and shape of the aerosol particles,5 but also by environmental parameters such as air currents, humidity and temperature.6 For example, boot washer brushes can disperse quite large droplets one to two meters from source,1 while other floor-washing procedures can disperse these droplets to distances sometimes exceeding two meters in height and five meters in length from the point of impact.7 It has also been shown that hand‑washing produces aerosols detectable more than 10 meters away.8

The main issue is that some microorganisms are able to survive within droplets. For example, L. monocytogenes can live up to 210 minutes in aerosol suspensions.9 It would appear that biphasic decay occurs within droplets in the first one to two minutes, resulting in a rapid loss of viability, followed by a second phase characterised by a slow decrease. It has been suggested that the initial decrease is related to evaporative cooling and mass transfer processes within the droplets until equilibrium is reached.10

Elsewhere, the bacterial survival is affected by the droplet size; as shown on Pseudomonas syringae and Erwinia herbicola, viability loss decreased.11 As mentioned earlier, it is also highly likely that many microorganisms within the droplets will be injured due to the stress of aerosolisation and, therefore, may not form any colonies on culture media, making them very difficult to detect.12

Even in the absence of water, some pathogens have been proven to survive in the air when associated with dust particles.13 Consequently, in the presence of aerosols, it is probable that new surfaces will be contaminated with viable, if not cultivable, microorganisms.

Role of surface properties on the droplet evaporation and deposition patterns

Materials contaminated by bio-aerosol can have varying surface properties, whose physicochemical and topographic differences impact the ease of contamination control. When a sessile droplet containing insoluble micro-particles evaporates, various deposition patterns are observable. The final deposit pattern is the result of the fluid flow within evaporating droplets, which is affected by numerous parameters, such as the properties of the substratum and the particle, the suspending medium, and the external environment. It can be assumed that the structure of the final deposit would affect the further bacterial survival and resistance to cleaning and disinfection procedures. 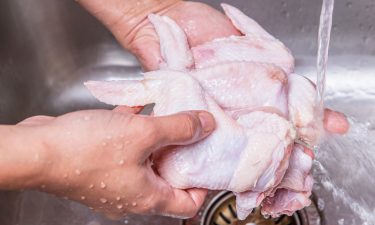 Washing chicken often results in splashes, with droplets capable of travelling more than 50cm in every direction

Few articles have addressed these issues in the context of bacterial contamination in the food environment. The only parameters still to be investigated in this context are substratum wettability14 and topography.15 At INRAE-PIHM, as part of a French National Research Agency (ANR, FEFS project [ANR-18-CE21-0010]) project, we investigated the effects of material surface properties on the deposition of droplets contaminated with Bacillus spores. We first confirmed the main role of material hydrophobicity on the diameter and pattern of the deposit after droplet (1 µl) evaporation (Figure 2). The deposit was small (+/- 1 mm diameter) on a hydrophobic material (Teflon), much larger (2.5-3.5 mm diameter) on hydrophilic glass, and intermediate on stainless steels 316 with a 2B- or 2R-finish. Furthermore, a ring surrounding the whole deposit was observed, whatever the material. More surprisingly, marked differences in the deposition patterns were observed with hydrophilic (B. subtilis) vs hydrophobic (B. cereus) spores, whether in the size of the deposit (larger with hydrophobic spores), or in the distribution of the spores within the ring. When hydrophilic spores were used, the inner area was unevenly covered with small zones covered with numerous spores, the remaining area being poorly contaminated. Conversely, with hydrophobic spores, homogeneous distribution of spores or spore clusters covered the whole inner area.

We also investigated the possible role of material topography through the use of stainless steels with different finishes. Figure 1 shows the surface average roughness, ranging from 0.05 µm or less (glass, polypropylene, stainless steel 2R) to 0.23 µm (stainless steel 2B), seemed to have little or no effect on the distribution of spores over the contaminated zone. 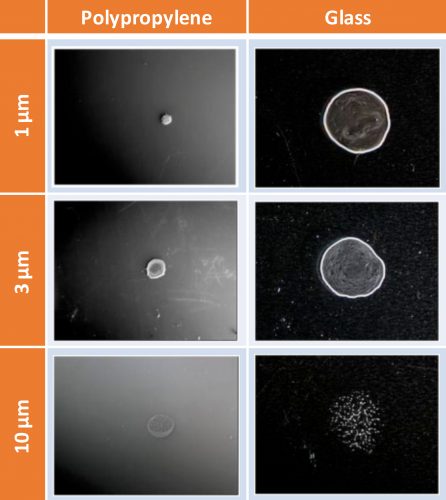 We then investigated the possible role of temperature and particle size on the deposition patterns. In food environments, contaminants can range in size from less than 1 µm (bacteria) to more than 10 µm (yeast), and the temperature varies depending on the process. Initially, we were unable to highlight any significant differences in the deposition patterns of either Bacillus spores as a function of temperature, within the 10-30°C range (data not shown). In order to determine any particle-size influence, we used differing diameter polystyrene microspheres (1, 3 and 10 µm). As shown in Figure 2, the microsphere distribution over the surface is clearly affected by particle size, the main differences being observed between microspheres of 3-µm and 10-µm diameters. This suggests that striking droplet behavioural differences exist for bacteria or yeasts, with likely consequences in terms of survival from desiccation and/or resistance to cleaning and disinfection. 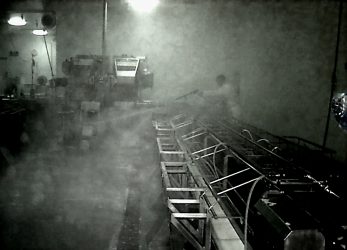 It is worth noting that these newly contaminated surfaces are probably rarely cleaned promptly after contamination. Unfortunately, many bacteria are able to withstand periods of desiccation, whether in the form of biofilms,16 or that of adherent cells17 and, therefore, will remain capable of cross‑contaminating food. One may wonder whether this drying phase might influence the further cleaning resistance of bacteria. Literature on the drying of adherent microorganisms mainly focuses on cross-contamination between foods and surfaces.18

However, at INRAE-PIHM, we have recently shown that the duration of an evaporation step, as well as the temperature during this step, could greatly affect the ease of removal of adherent Bacillus spores.19

The authors would like to acknowledge the ANR (Agence Nationale de la Recherche) for funding the FEFS project (ANR-18-CE21-0010) and the Hauts-de-France region for funding the Interreg Veg-I-Tec project (programme Interreg V France-Wallonia-Flanders, GoToS3NuTeX). 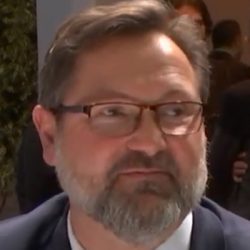 Erwan Billet is a food engineer and directs the French HYDIAC organisation, specialising in training and consulting in hygiene and cleaning in specific environments. He helps companies resolve surface contamination problems, supports in the optimisation of their cleaning techniques, and helps improve the hygienic design of their production equipment. In addition, he presides the French regional section of the EHEDG (European Hygienic Engineering Design Group). 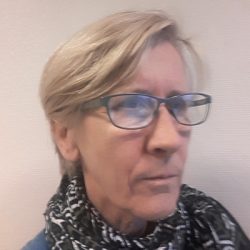 Christine Faille is research director at the French National Research Institute for Agriculture, Food and Environment (INRAE), and is the leader of a research team specialised in phenomena occurring at interfaces between bacteria (spores/biofilms) and materials in the agro-industrial sector. She has a recognised expertise on Bacillus spores, biofilm formation and phenomena occurring during the cleaning of contaminated surfaces. Her activities are currently focused on the investigation of surface properties of bacteria and materials affecting surface hygiene control and on the role of evaporation in interactions between bacteria and materials.

Recall roundup: Salmonella alerts in the UK and Canada