Dr. Evelyn Jantscher-Krenn is a well-known researcher and specialist in the field of human milk oligosaccharides, glycobiology, pregnancy and placenta. 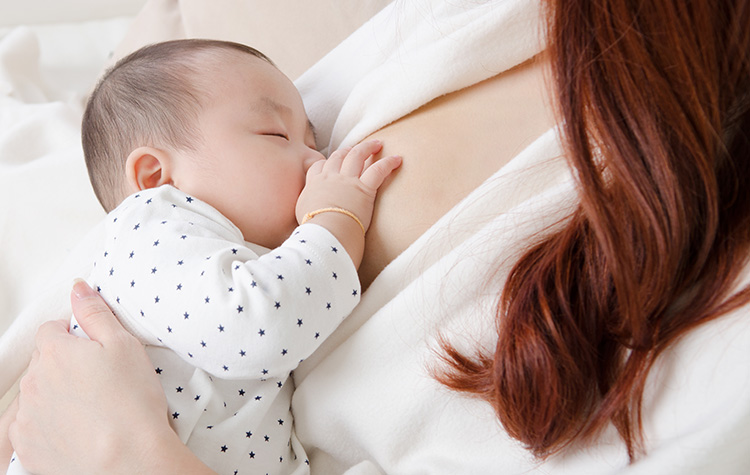 She works as a project manager at the Medical University of Graz in the Department of Obstetrics and Gynaecology. Her research focus is the role of human milk oligosaccharides during pregnancy. Bettina Gutiérrez from Jennewein Biotechnologie talked with her about her research.

BG: Your research shows that human milk oligosaccharides (HMOs) circulate during early pregnancy in the maternal blood. What does this mean for the newborn?

EJK: We show that mothers produce HMOs starting as early as 10 weeks of gestation and thus, months before the baby is born. This suggests that babies might already benefit from HMOs before they take their first sip of mother’s milk. Whether HMOs protect the unborn indirectly, e.g. by protecting the mother from infections or facilitating immune and metabolic adaptations during pregnancy, or whether HMOs have direct benefits on the unborn, remains to be elucidated.

BG: Is the profile of the HMOs changing during pregnancy?

EJK: Our studies show that HMOs profiles change over the course of pregnancy in concentration and composition. While total HMOs increase over time, we found a change from a relatively high percentage of sialylated HMOs such as 3’-sialyllactose in the first trimester to a more balanced fucosylated-to-sialylated HMO ratio in mid to late pregnancy. This is mostly due to a substantial increase in 2’-fucosyllactose (2’FL) and other secretor active HMOs. How these changes are regulated and whether specific HMOs have a specific temporal function during pregnancy is not known. However, we have found differences in the 2’FL increase with maternal metabolic status, as higher maternal fat mass was associated with a delayed increase in 2’FL until midpregnancy.

BG: The HMOs have some health benefits as for example the protection from infectious diseases or the formation of a healthy gut microbiome. Is it demonstrated that the HMOs have these benefits during pregnancy?

EJK: It is indeed very intriguing that HMOs might have similar benefits during pregnancy for the mother-fetus unit than they have for the newborn. During pregnancy, HMOs are present in the systemic circulation of the pregnant woman, and most likely also in the fetal circulation, as we find HMOs in cord blood at delivery. This raises the question whether HMOs can have direct effects on the adaptations of the immune system or the metabolic system during pregnancy. Furthermore, we have indications that prenatal HMOs excreted with the maternal urine might protect pregnant women against specific urogenital infections and might contribute to shaping the maternal vaginal and urinary microbiome. Traditionally, prebiotic effects are the most studied effects of HMOs. Given that prenatal HMOs reach maternal (and potential fetal) body sites during pregnancy, they might also influence microbial composition and microbial function at these particular body sites.

BG: Can the prenatal HMOs influence the pregnancy outcome?

EJK: This is a very intriguing question, to which we are currently investigating. We are asking whether for example, HMO composition or concentration influences pregnancy outcomes such as gestational diabetes mellitus (GDM) or preterm labor / birth. In previous studies we found that higher 3’SL early in pregnancy was associated with higher risk for the development of GDM in a cohort of overweight and obese women. Whether this is also true for normal weight women, and whether this is a causal relationship, or whether 3’SL can be used as a predictor of GDM warrants more research. We also have indications that higher serum 3’SL is associated with increased inflammation, shorter gestational time, and higher risk for preterm birth. However, this needs to be studied in more detail.

BG:What is your research focus concerning HMOs during pregnancy?

EJK: I am most fascinated by the many potential roles of HMOs as novel bioactive factors in pregnancy. We are still at the beginning of understanding the roles of HMOs in human milk for the newborn, which can be seen as a continuation of their roles in pregnancy. Even less is known on the roles of HMOs in pregnancy. Thus, our work focuses on basic questions such as: How are HMOs regulated in a healthy pregnancy and what are ‘normal’ HMO profiles? What are the modifiable determinants of HMO profiles in pregnancy, for example nutritional status, diet and physical activity? Are HMO concentrations and compositions altered in pregnancies complicated by obesity, GDM, or preeclampsia? And if so, what are the consequences of altered HMOs on maternal and fetal health in pregnancy and thereafter. We found that HMOs in pregnancy vary with gestational age and genetics (secretor status), but also with maternal body fat. Women with more fat mass had lower serum 2’FL at midpregnancy, suggesting that maternal metabolic status can contribute to the temporal regulation of HMOs during pregnancy. However, we don’t know about the potential consequences for the fetus or newborn. We also found, that HMOs in the maternal and the fetal circulation are similar, suggesting that potential disbalances in HMOs in the maternal circulation might translate into potential disbalance in HMOs the fetal circulation.

In other studies, we found that specific HMOs seem to be associated with increased inflammation during pregnancy, one study showed 3’SL as potentially being predictive of GDM, and another study pointed towards associations of higher 3’SL with preterm birth.

BG: And which research focus will you follow up on especially in the future?