Alejandro Marangoni, Professor at the University of Guelph, explains how the viscosity of a lubricant can have both positive and negative implications, and looks to how this is best controlled and managed. 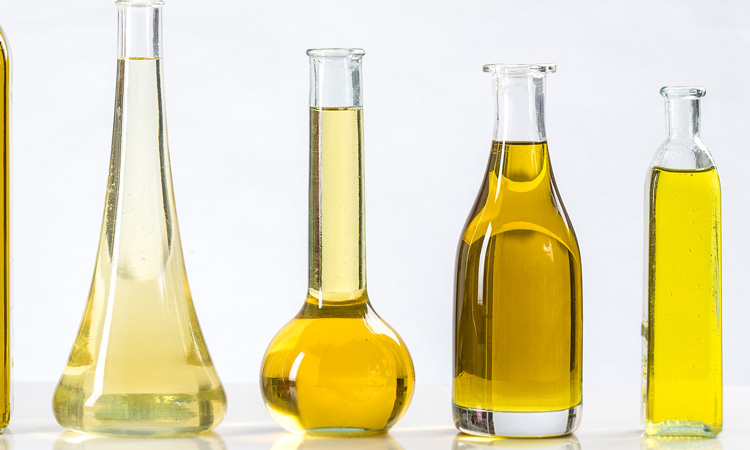 The main functions of a lubricant are to decrease the friction coefficient between moving surfaces, thus improving on machine performance with smaller energy inputs, as well as to help dissipate frictional heat. If the moving metal surfaces come too close, metal-to-metal contact will lead to surface damage (scarring), and if the heat becomes high enough, surfaces can melt and fuse. This would lead to a catastrophic failure of the machine’s moving parts.

Most lubricants, food grade or not, are based on mineral or synthetic oils of specific viscosities. Synthetic oils are usually of higher purity and offer thus a higher performance. The most common monomer used in synthetic oil manufacture is alpha-olefin, a six-carbon primary alkene. Polymerisation of this alpha-olefin results in the formation of synthetic oils of different viscosities and with added benefit of higher viscosity index than mineral oils. The viscosity index of an oil refers to the difference in viscosity between 40oC and 100oC. The key characteristic of a high VI oil is its ability to withstand decreases in viscosity as a function of increasing temperature. You do not want your oil to seize at low temperatures but also not to lose all viscosity at higher temperatures.

Most lubricants, food grade or not, are based on mineral or synthetic oils of specific viscosities

A viscosity index below 100 is considered low, while a VI higher than 200 is considered very high. High performing suspension oils sometimes have Vis in the range 300-400. Mineral oils have VIs below 100, PAO synthetic oils around 150, while high-oleic canola oil has a VI of 220. This consideration for VI is important and can be confusing when, for example, buying two oils of the same viscosity classification.  Oils are classified in families of viscosity. Most of the time, this viscosity is reported as the oils’ “weight”.  In my view, this is a very poor classification scheme. For example, in the trade, a 10wt oil can have viscosities between 25cSt and 45cSt at 40oC (standard temperature), but obviously, a 25cSt vs a 45cSt oil will have very different base properties and performance. The unit cSt refers to the kinematic viscosity (dynamic viscosity/density in units of cm2/s). See the example in the table below.

Comparison of viscosity characteristics as a function of temperature between a mineral oil (A) and a PAO based synthetic oil (B). Source: https://www.machinerylubrication.com/Read/28956/lubricant-viscosity-index

Notice that Oil A, a mineral oil, and oil B, a synthetic PAO oil, have the same viscosity at 40oC, and would therefore be sold as the same oil. Notice, though the massive increase in viscosity for the mineral oil at -20oC, and the larger decrease in viscosity at 100oC. These are two characteristics best avoided in a lubricating oil. The more constant viscosity-temperature profile of the synthetic oil is more desirable.

Vegetable oils, being an ester, have higher Vis than either mineral oil or synthetic oils. However, increases in viscosity at lower temperatures are somewhat problematic, with the added issue of possible crystallisation. Low temperature stability is measured by the cloud point of the oil, which is less than -40oC for cold-weather oils. Most vegetable oils such as canola or soybean oils have cloud points between -10oC and -20oC, which is not considered truly low-temperature performance. It is possible to create vegetable oils with very low pour points by randomising the oil using short chain or hydroxylated fatty acids, which interfere with crystal formation (nucleation inhibitor).

Most vegetable oils such as canola or soybean oils have cloud points between -10oC and -20oC, which is not considered truly low-temperature performance

Even though vegetable oils have higher Vis and viscosity than mineral oils, all vegetable oils suffer from lower chemical stability. Unsaturated oils are prone to oxidation. However, high-oleic acid oils (greater than 75 percent oleic acid), including canola, sunflower and soybean, have an increased oxidative stability. A typical high oleic canola oil will have an oxidative stability index (OSI) of 24 hours, while its regular counterpart has an OSI of approximately seven hours. The OSI measurement refers to the onset time of oxidation while bubbling air through the oil at 110oC. Vegetable oil lubricants will always have to include an antioxidant such as TBHQ at levels of 0.1 percent (10x higher than in foods) to help the oil resist oxidation. Care must be exercised with regular polyunsaturated oils since these also tend to polymerise in the dry heat.

An important concept to have in mind when characterising a lubricant, and its tribological behaviour, is the Stribeck curve. A Stribeck curve describes changes in the friction coefficient as a function of the Hersey number. The Hersey number is equal to [viscosity*sliding speed/normal load per unit length]. A classic Stribeck curve is shown below: 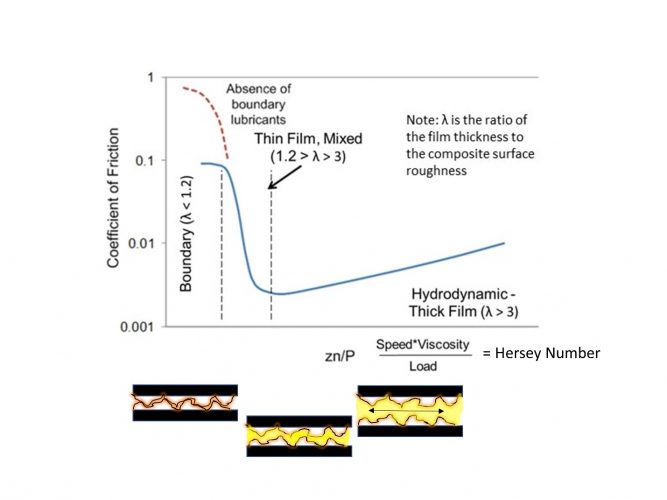 Stribeck curve for a putative lubricant

One can clearly discern the three typical regions of behaviour. At low speeds, the friction coefficient is very high since we have metal-to-metal contact. Surfaces are not considered smooth, and the irregularities in the surface are called “asperities”. This is what happens when a machine is started cold. At this point, the only thing that is preventing metal-to-metal scarring and damage is the presence of a “boundary lubricant”.  A boundary lubricant would interact physically or chemically with the metal surface, forming a protective layer and preventing wear. This is depicted as the pink layer on the asperities shown above. As the sliding speed increases, oil (yellow) starts to flow in between the surfaces, creating a thin fluid film which separates the surfaces. This is the “mixed” or “elasto hydrodynamic” regime. Here you have some asperities still touching, but also the presence of a thin lubricant film.

The flow of oil creates hydrodynamic pressure (dynamic pressure = density*(velocity)2), perpendicular to the direction of the flow, keeping the metal surfaces apart. In this mixed regime, the actual surfaces can also yield (hence “elasto” hydrodynamic). For the typical Martin solution of the Reynolds equation, the film thickness is a function of the Hersey number. Interesting then, higher speeds lead to higher film thicknesses, as does viscosity. Obviously, a higher normal load will lead to decreased thickness. However, one must also consider that increased loads will also lead to higher viscosities. In the figure above, the different lubrication regimes are characterised by the thickness of this oil film relative to the thickness of the asperities.

Notice how the boundary lubrication regime has the highest friction coefficient, which decreases as you proceed into the mixed regime. Interestingly, at higher speeds in the purely hydrodynamic regime, the friction coefficient increases proportionately to the sliding speed, due to increases in film thickness. Even if this results in less wear of the moving parts, due to high film thickness, it will lead to higher energy inputs to keep the machine moving. The sweet spot for lubrication is the minimum achieved in the Stribeck curve, at the end of the mixed regime. A judicious choice of fluid viscosity at a particular temperature for a specific sliding speed (bearing speed), will result in the lowest friction coefficient, lowest energy input and lowest surface wear. It is an optimisation problem.

Vegetable oils have a relatively high viscosity, thus not requiring viscosity enhancers. They also have a high VI, thus not requiring viscosity index modifiers either. They may require extreme pressure additives which guarantee some form of boundary lubrication, depending on the application. Vegetable oils will always require antioxidants to enhance oxidative stability. Other additives that may be required are anti-corrosion additives as well as detergents to prevent carbon deposition. However, this will depend on the exact application of the oil. If in direct contact with food, it is always best to use a vegetable oil lubricant with as few additives as possible. We have been able to formulate food grade lubricants using natural ingredients which offer similar functionalities a mineral-oil based “food grade” lubricants.

Alejandro Marangoni is a Professor and Tier I Canada Research Chair in Soft Materials Science at the University of Guelph, Canada. His work concentrates on the physical properties of lipidic materials in foods, cosmetics and biolubricants. A scientist with over 400 research papers, 85 book chapters, 13 books and 40 patents to his name, he has been the recipient of many scientific awards throughout the world, and is a Fellow of the Royal Society of Canada, the American Oil Chemists’ Society, the Institute of Food Technologists and the Royal Society of Chemistry (UK). 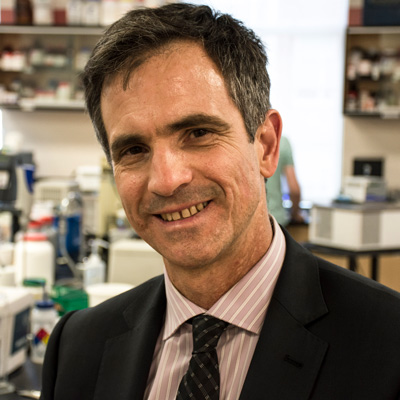 One response to “Viscosity of food grade lubricant oils”