Scientists identify the cause of pink discolouration in cheese

Scientists have identified a heat-loving bacterium, called Thermus as the cause of pink discolouration defects in cheese… 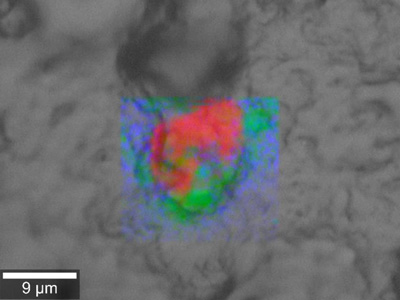 Scientists have identified a heat-loving bacterium as the cause of pink discolouration defects in cheese. Overlay of intensity image of the studied cheese matrix (grey) and the maps of the chemical composition obtained from local Raman spectral analysis of a pink discolored region of a defect cheese: red – carotenoid (lycopane); blue – proteins; green – lipids.

Pink discolouration affects many cheeses throughout the world, leading to significant financial loss for the industry. Despite decades of research, the cause of this defect has remained elusive until now. Researchers from Teagasc and University College Cork, using high throughput DNA-sequencing technologies, have linked the pink defect in cheeses with the presence of a bacterium from the genus Thermus.

Thermus is a thermophile microorganism that is more frequently associated with environments such as hot thermal springs and which is known for its production of vivid pigments including carotenoids. Once the researchers established the unexpected presence of Thermus in defective cheese, they were able to employ specialised techniques to grow the bacteria on agar plates.

Subsequently, they artificially added the microbe back into an experimental cheese, and recreated the pinking defect. As a result, the role of Thermus in this defect was definitively established.

Commenting on the discovery, Dr Paul Cotter , Principal Research Officer, Teagasc Food Research Centre, Moorepark and Principal Investigator, APC Microbiome Institute, University College Cork, said: “This finding has the potential to lead to new strategies to eliminate this defect while also representing an approach that can be employed to investigate the microbial role in other food defects of unknown origin. This research demonstrates the significant impact that DNA sequencing technologies are having on our understanding of, and ability to address, food quality- and food safety-related issues.”