A study has found that drinking coffee is associated with lower risk of colorectal cancer, and the more coffee consumed, the lower the risk… 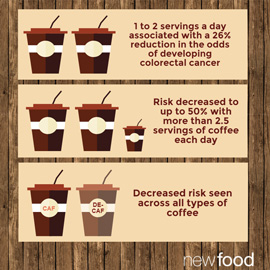 Researchers have found that coffee consumption decreases the risk of colorectal cancer. The study examined over 5,100 men and women who had been diagnosed with colorectal cancer within the past six months, along with an additional 4,000 men and women with no history of colorectal cancer to serve as a control group. Participants reported their daily consumption of espresso, instant, decaffeinated and filtered coffee, as well as their total consumption of other liquids. A questionnaire also gathered information about many other factors that influence the risk of colorectal cancer, including family history of cancer, diet, physical activity and smoking.

“We found that drinking coffee is associated with lower risk of colorectal cancer, and the more coffee consumed, the lower the risk,” said Stephen Gruber, MD, PhD, MPH, director of the USC Norris Comprehensive Cancer Centre. The indication of decreased risk was seen across all types of coffee, both caffeinated and decaffeinated.

“We were somewhat surprised to see that caffeine did not seem to matter,” Gruber said. “This indicates that caffeine alone is not responsible for coffee’s protective properties.”

Coffee contains many elements that contribute to overall colorectal health and may explain the preventive properties. Caffeine and polyphenol can act as antioxidants, limiting the growth of potential colon cancer cells. Melanoidins generated during the roasting process have been hypothesised to encourage colon mobility. Diterpenes may prevent cancer by enhancing the body’s defense against oxidative damage.

“The levels of beneficial compounds per serving of coffee vary depending on the bean, roast and brewing method,” said first author Stephanie Schmit, PhD, MPH. “The good news is that our data presents a decreased risk of colorectal cancer regardless of what flavour or form of coffee you prefer.”

The study was conducted by a research team led by Gad Rennert, MD, PhD, director of the Clalit National Israeli Cancer Control Centre, and University of Southern California (USC) Norris Comprehensive Cancer Centre of Keck Medicine of USC. One advantage of this large, population-based study is that the results are representative of many coffee-drinking populations.

“Although coffee consumption in Israel is less common and with more type-variability than in the United States, our results indicate similarities in risk reduction with use consumption of various types of coffee,” Rennert said.

“We need additional research before advocating for coffee consumption as a preventive measure,” Gruber added. “That being said, there are few health risks to coffee consumption, I would encourage coffee lovers to revel in the strong possibility that their daily mug may lower their risk of colorectal cancer.”