According to a new study, eating at least one portion of fish per week may help reduce a person’s risk of developing Alzheimer’s disease… 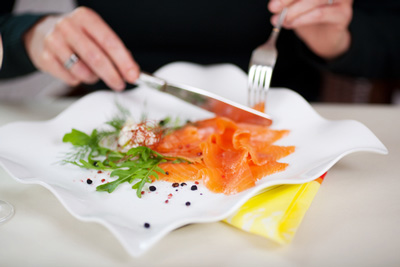 According to new research, eating at least one portion of fish per week may help reduce a person’s risk of developing Alzheimer’s disease and dementia-related illnesses. Starting in 1997, the study monitored elderly people living in Chicago and the surrounding areas. The researchers recorded participants’ eating habits and other lifestyle factors. Upon death, the brains of 286 elderly were examined for dementia and Alzheimer’s disease.

Ondine van de Rest, a researcher at Wageningen University, explains: “This is the first study in which it was possible to conduct research on the presence of markers of dementia and Alzheimer’s disease in the actual brains of test subjects. As such, it enabled us to objectively view the association with fish consumption.”

The researchers found fewer markers of dementia and Alzheimer’s disease amongst elderly people who consumed fish at least once a week than amongst those who consumed fish less than once a week. Strikingly, this association was only present amongst carriers of APOE ε4, the gene that increases the risk of developing Alzheimer’s disease and dementia. However, given that this association was not consistently demonstrated in other studies, it is still too early to confirm that eating fish on a weekly basis has a positive role on people who are genetically prone to developing dementia.

We know that eating more fish entails consuming higher concentrations of heavy metals such as mercury, with long-term overconsumption of heavy metals potentially causing damage to the kidneys, liver, brain and nervous system. This was also true in this study – it demonstrated that the higher the intake of fish, the higher the concentrations of mercury. However, as these higher concentrations did not correlate with a greater number of markers of dementia, it was not the case that an increased intake of mercury had a negative impact on the brain. In general, the health benefits of consuming fish outweigh possible negative effects.