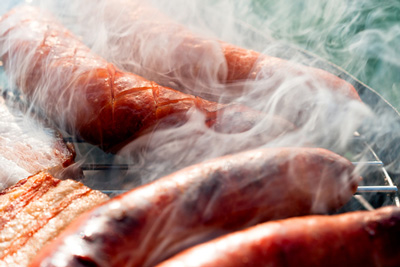 The International Agency for Research on Cancer (IARC) of the World Health Organisation has said that processed meats, such as bacon, sausages and ham, are carcinogenic. The IARC has published a report that places processed meats in the same category as asbestos, arsenic and cigarettes as a major cause for cancer (IARC Group 1). It says that 50g of processed meat a day increased the chance of developing colorectal cancer by 18%.

The IARC also note that red meats are ‘probably carcinogenic’ although it also acknowledges that red meat has nutritional value.

In assessing red and processed meat, an IARC Working Group evaluated 800 studies that investigated associations of more than a dozen types of cancer with the consumption of red meat or processed meat in many countries and populations with diverse diets. The most influential evidence came from large prospective cohort studies conducted over the past 20 years.

“For an individual, the risk of developing colorectal cancer because of their consumption of processed meat remains small, but this risk increases with the amount of meat consumed,” says Dr Kurt Straif, Head of the IARC Monographs Programme. “In view of the large number of people who consume processed meat, the global impact on cancer incidence is of public health importance.”

“These findings further support current public health recommendations to limit intake of meat,” says Dr Christopher Wild, Director of IARC. “At the same time, red meat has nutritional value. Therefore, these results are important in enabling governments and international regulatory agencies to conduct risk assessments, in order to balance the risks and benefits of eating red meat and processed meat and to provide the best possible dietary recommendations.”

In a Q&A on the carcinogenicity of the consumption of red meat and processed meat, when asked how many cancer cases every year can be attributed to consumption of processed meat and red meat, the IARC responded to say that, based on the most recent estimates by the Global Burden of Disease Project, about 34,000 cancer deaths per year worldwide are attributable to diets high in processed meat. IARC went on to say that while eating red meat has not yet been established as a cause of cancer, if the reported associations were proven to be causal, the Global Burden of Disease Project has estimated that diets high in red meat could be responsible for 50,000 cancer deaths per year worldwide.

Responding to the news, the North American Meat Institute (NAMI), said classifying red and processed meat as “cancer hazards” defies both common sense and numerous studies showing no correlation between meat and cancer and many more studies showing the many health benefits of balanced diets that include meat”.

Betsy Booren, Ph.D., NAMI Vice President of Scientific Affairs, commented, “Red and processed meat are among 940 agents reviewed by IARC and found to pose some level of theoretical ‘hazard.’ Only one substance, a chemical in yoga pants, has been declared by IARC not to cause cancer.”

Dr Booren continued, “IARC says you can enjoy your yoga class, but don’t breathe air (Class I carcinogen), sit near a sun-filled window (Class I), apply aloe vera (Class 2B) if you get a sunburn, drink wine or coffee (Class I and Class 2B), or eat grilled food (Class 2A). And if you are a hairdresser or do shiftwork (both Class 2A), you should seek a new career.”

“IARC’s decision simply cannot be applied to people’s health because it considers just one piece of the health puzzle: theoretical hazards. Risks and benefits must be considered together before telling people what to eat, drink, drive, breathe, or where to work,” Dr Booren concluded.

One response to “Processed meat classified as carcinogenic”